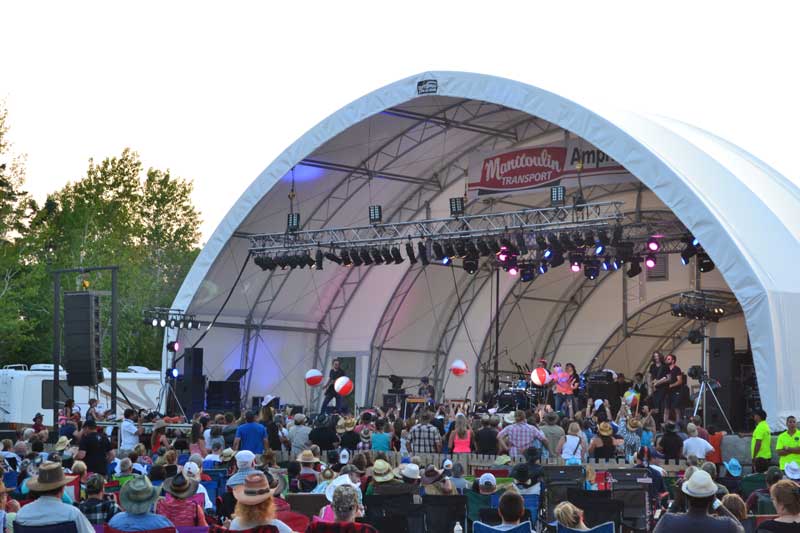 LITTLE CURRENT—Manitoulin Country Fest is just one day away from its 10th anniversary and is celebrating this big occasion with a great lineup and special activities.

“We are really happy to be celebrating the 10th annual Country Fest,” said Kelly Timmermans, who organizes the annual festival with her husband Craig Timmermans. “We have some great artists coming this year and some amazing events like our songwriter showcase with North Channel Cruiseline.”

The weekend will get started early with a fundraiser for the Manitoulin Centennial Manor tonight (Wednesday, August 3) with a dinner and cocktails at the Rendezvous Pavilion followed by a concert with Brett Kissel aboard North Channel Cruise Line’s Grand Heron.

This will be Danielle Marie’s second appearance at MCF and she is pumped. “I am so exicted,” she said. “This year I will be facing a big crowd.”

Ms. Marie has been involved in music since the tender age of 14 (she is now a veteran of 20), when she had the opportunity to work as a studio helper in a recording studio in Newfoundland with a number of big name stars. “I decided right then that was what I wanted to do, to be on the other side of the glass recording my own songs,” she said. She has since recorded four radio singles that have charted respectfully. “My last single (Drive Away) was in the Top 100 for 15 weeks,” she said. “That’s pretty cool for an independent artist.”

“My new single is coming out in the fall and I am really excited,” she said. It is hard to resist her enthusiasm, but it is entirely understandable as this song was co-written with Nashville songwriter Phil Barton. ‘I Want To Go There’ is just about ready for release.

While it might seem a little odd for a country music singer to list Queen’s Freddy Mercury as a major influence, when it comes to performing, you would be hard pressed to find a more energetic and dynamic role model for a performer. “I love Queen,” she laughs.

Back again this year will be songwriter showcases aboard North Channel Cruise Line’s Le Grand Heron. There will be three showcases offered this year taking place on Thursday, August 4 and Friday, August 5 from 11 am to 1 pm. Thursday’s artists are Jamie Warren, Mike Trudell, Jessie P and Andrew Hyatt, while Friday’s artists will include Sean Hogan, Alessia Cohle and Jessica Mitchell. Tickets are $39 and include lunch and are available at northchanneltours.com.

Jessie T, who has enjoyed tremendous success with her first two singles released in February and March of this year, will be releasing her first album in August as an independent artist.

“I am a fairly new artist,” said Jessie T, “so this is a great opportunity for me to showcase my work.” Her album, ‘Reckless Heart’ is factor funded, which she describes as a really big deal as there is strong competition for the funding. “It is really a great vote of confidence in my work as a songwriter and musician,” she said.

Jessie T has taken part in many writer’s circles, but this will be her first aboard a ship. “What a cool way to show who you are. It is an intimate venue,” she said of the writer’s showcase. “I am really looking forward to playing and all of the great scenery.”

Back again will be the TD Canada Family Fun Zone with face painting, bouncy castles, magicians and jugglers—all for free.

Electronic wristbands will be back at this year’s Country Fest with enhanced features such as self-loading from your cellphone.

“To help keep festival goers cool, we will be having a misting station on-site,” said Ms. Timmermans. “Also new this year is the Manitowaning Mill Home Hardware Scavenger Hunt which will be all social media picture based.”

As well, the CCMA Fan Experience has returned again and is bigger and better than ever. With the purchase of a Manitoulin Country Fest wristband you are entered into the contest to win a car rental, gas money, $600 in spending money, a three-night stay at a hotel and tickets to all the CCMA 2016 events being held in London, Ontario.

The Manitoulin Minor Hockey Association will be there selling 50/50 draw tickets.

Be sure to have your best country look on for the festival, as Eastlink, a title sponsor this year, will be at Country Fest filming through out weekend and will be airing six, 30 minute specials after the event, highlighting Manitoulin Country Fest. Big Boys with Toys from Sudbury will also be in attendance filming the concert and taking pictures with a drone.