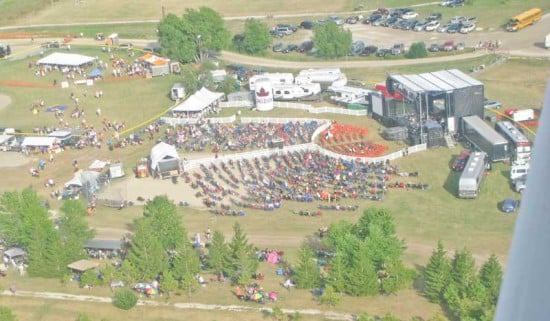 LITTLE CURRENT—Manitoulin Country Fest is less than 70 days away from its 10th anniversary and this year promises to be bigger and better than ever to mark the momentous occasion.

“We are really excited for this year’s Country Fest,” said Kelly Timmermans, who organizes the annual August festival with her husband Craig Timmermans. “We have a great lineup and a lot of fun activities planned.”

Back again by popular demand will be songwriter showcases aboard North Channel Cruise Line’s Le Grand Heron. There will be three showcases offered this year taking place on Wednesday, August 3, Thursday, August 4 and Friday, August 5 from 11 am to 1 pm. Friday night’s artist will be Sean Hogan, and Wednesday and Thursday artists are still to be announced. Tickets are $39 and available at northchanneltours.com.

“We are also very excited to be hosting a fundraising event for the Manitoulin Centennial Manor on the night of Wednesday (August 3),” shared Ms. Timmermans. “The evening will include cocktails and dinner at the Rendezvous Pavilion followed by a concert by Brett Kissel aboard the Grand Heron. It is going to be a great night, for a great cause.”

There are only 100 tickets available for the event, with 30 already sold as of this past Monday. The tickets for the songwriter showcases are also limited.

“There are lots of fun events planned for this year such as a scavenger hunt, which will take campers, or whoever would like to participate, around the area and will be social media based,” said Ms. Timmermans. “Back again will be the TD Canada Family Fun Zone with face painting, bouncy castles, magicians and jugglers—all for free. We will also be holding the hillbilly olympics again with fun events like the toilet seat toss and pool noodle javelin.”

Electronic wristbands will be back at this year’s Country Fest with enhanced features such as self-loading from your cellphone.

Also back is the CCMA Fan Experience. With the purchase of a Manitoulin Country Fest wristband you are entered into the contest to win a car rental, gas money, $600 in spending money, a three-night stay at a hotel and tickets to all the CCMA 2016 events being held in London, Ontario.

Manitoulin Country Fest tickets are available online at secure1.gettickets.ca or by calling 1-866-755-7425. Camping is already 70 percent sold out so be sure to get your passes soon.