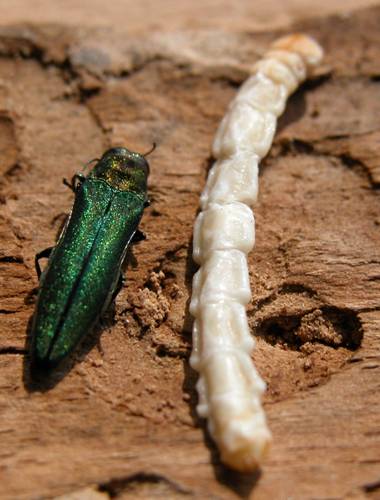 MANITOULIN—With the Emerald Ash Borer (EAB) having been discovered and confirmed on Manitoulin Island last fall, under federal ministerial order anyone moving ash tree materials or firewood of any kind off Manitoulin Island (or through the district regulated area) without written permission from the Canadian Food Inspection Agency (CFIA) may be fined or prosecuted. The destructive beetle spreads to new areas when infested wood is moved.

“One of the regulated areas for EAB is the Manitoulin Island district, the entire district and outlying areas,” said Brian Hamilton of the CFIA last Friday. “The whole area is under (ministerial order),” he said, pointing out EAB was definitely found on test traps on Manitoulin Island and the transfer of ash tree materials or fire wood has been regulated.”

Mr. Hamilton explained, “it usually takes a number of years before EAB is seen in an area and by then it can cause significant tree mortalities. We know EAB was found on Manitoulin and the district, although we don’t know exactly how widespread it is.”

The EAB, “is from the beetle family, wood boring beetles, is quite a beast and is a primary tree killer,” said Mr. Hamilton. “A whole bunch of insects attack a tree that is dead or dying, but also in the case of EAB they attack fully healthy trees and cause them to die as it eats the tissues under the bark of the tree. It’s certainly good at what it does.”

In areas such as the Windsor-Essex corridor, EAB has been established for a long time, said Mr. Hamilton. “98-99 percent of ash trees, millions of have been killed.”

There are three different pesticides registered for use on EAB, Treeazin-Bioforest.ca, an injected organic pesticide, but it and other have to be injected into trees. “This is mostly suited to municipalities, including and individual property owners,” pointed out Mr. Hamilton. However, he added out, “research is getting close to natural treatments, but is still in its infancy. But one thing we could use is a couple of hard winters.”

“The EAB is harvested by woodpeckers and wasps who will feed on them, but not in the numbers that would control their population,” said Mr. Hamilton.

By being regulated by CFIA, “means any ash trees or products, and firewood from all tree species are regulated from being transported off the Island-district, unless a person has had the trees-products inspected and certified (BY CFIA).”

Mr. Hamilton noted that anyone in contravention of the ministerial order and charged, “can be prosecuted with fines up to a quarter of a million dollars and possible jail time as well.” He said CFIA, “has issued dozens of fines on people who have transferred ash and firewood out of a district without it being inspected and certified first.”

“EAB is one of the worst pests around,” continued Mr. Hamilton. “It is like the Bark Beetle in the south, and limiting the transfer of ash trees and firewood of any kinds is good for forestry.”

In order to slow its spread and protect our forests, the CFIA establishes regulated areas by Ministerial Order from which movement of regulated materials that may spread EAB is prohibited without prior permission frm the CFIA.

With the Manitoulin district being regulated, materials, including any yard waste that may contain ash, ash logs and firewood of all tree species could not be moved outside the district without prior permission or a permit from the CFIA. These restrictions may also apply to articles and handicrafts made from untreated ash wood. There is also a program available that would allow those enrolled to obtain a permit to move regulated materials outside the district during times of the year when the beetle is not active, or year round once the ash material has been treated to mitigate the risk of spread of EAB.

Are your trees infected? Know the signs 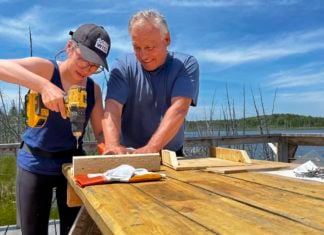