MANITOULIN – If you have ever gazed with envy at birds soaring high overhead and wished you could see the Island from their vantagepoint, or just would like to learn the basics of flying an airport, you might soon be in luck. Manitoulin East Municipal Airport manager Andy Atchison will be holding a meeting at the airport looking to gauge interest in starting up a flying club at this end of the Island. Mr. Atchison said that he’d been thinking about the idea for some time and the success of the flying club at the Gore Bay airport has encouraged him to test the waters.

“I think there are enough interested people on Manitoulin for both clubs to be successful,” he said. “Currently we don’t have anything here, I think it would be advantageous to have one here. It would be good for everyone. It would bring a lot more activity here at the airport.”

There has been a decline in young people taking up flying in recent years, an ongoing concern for the pilots of the Young Eagles organization and their dedicated pilots. The Young Eagles program has helped reignite interest in flying.

“Once you get young people interested, they take off from there,” he said. Mr. Atchison said that there are many barriers to learning to fly, especially the cost. A flying club helps to spread those costs across a lot of people making the activity much more accessible.

Passion drives many of those who have taken the steps to gain their pilot’s licence, and like many people who have a passion for an activity, most pilots would dearly love to share their passion and pass it on to others.

“I have three passions in my life,” he said, “my family, Manitoulin Island and the third is flying.”

Mr. Atchison said that over his 30 years in police enforcement he had all of the usual things associated with raising a family, mortgages, car loans and college tuition. “But now that I am retired, I don’t have all of those things and flying has come to the forefront.”

“I have to congratulate Wade Cook and Robbie Caldwell, the manager up there,” said Mr. Atchison. “They set up a wonderful little flying club, I would like to mirror that here. I think there is room enough for both of us.”

Mr. Atchison said that he has been particularly struck at the number of First Nations youth who have come to the airport to partake in the opportunity to go up in the air with the Young Eagles pilots. “I would say at least 60 to 70 percent of the kids coming out are Indigenous.”

He pointed to the immense career opportunities currently available in Canada’s North for pilots to fly into remote communities and mining camps. “The opportunities are endless,” he said.

The flying club can be advantageous for just about anyone interested in flying. “Even if you already have your pilot’s licence, the cost of buying an airplane is out of reach for a lot of people’s means,” said Mr. Atchison. One of the things Mr. Atchison envisions is purchasing a plane, with a number of people buying shares to make it much more affordable.

“With a company set up, each person with shares can be covered by the company insurance,” he said, thus spreading that cost out over a large number of people as well.

Mr. Atchison has already done a good deal of the legwork in putting in place the infrastructure and human resources. “I spoke to a flying instructor and they said they would be willing to come out to provide instruction,” he said. He has even cast an eye onto what planes might be available in the market that might suit the club.

The first meeting to discuss setting up a flying club will take place at 7 pm on Wednesday, October 20 at the Manitoulin East Municipal Airport on Highway 6. 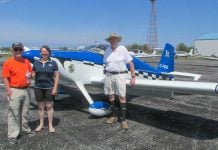 Rally at Gore Bay-Manitoulin airport attracts pilots from across Canada 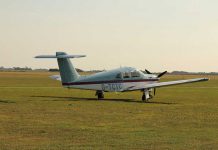 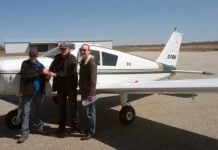 Traffic up at Gore Bay-Manitoulin Airport