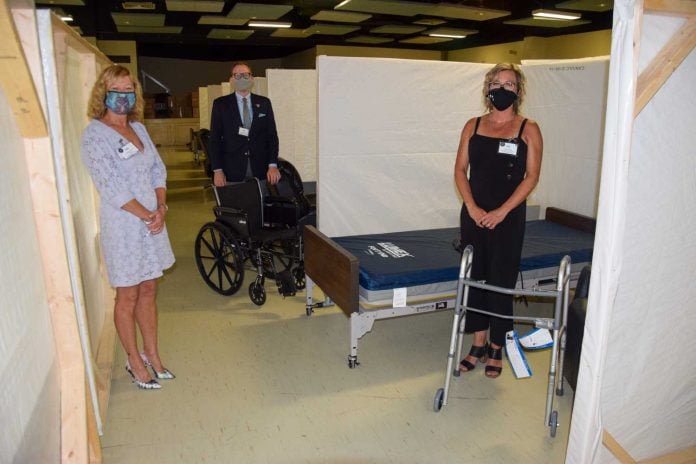 LITTLE CURRENT – Rows of electric beds stand in silent sentinel, ready to bulwark Manitoulin’s health care system should any second wave threaten to lap on the Island’s shores. The alternative care site located in the upper hall of the recreation centre in Little Current has been built by Manitoulin Health Centre’s (MHC) facilities department and a dedicated group of volunteers—it is now ready, willing and able to complement the hospital’s other two sites should the need arise.

The MHC senior management team of president Lynn Foster, vice-president Tim Vine and Paula Fields, vice-president of clinical services met with The Expositor recently for an in-depth tour of the facility. The alternative care site, aka field hospital, is intended as a means of extending the Little Current hospital site’s ability to deal with a massive influx of pandemic victims should that eventuality come to pass.

“That’s something we all hope will not be necessary,” admits Ms. Foster. But hope stands as a poor defence against a ruthless virus that has rocked the entire globe to its financial and health system cores. “We need to be prepared.”

To that end, MHC’s facilities team, in partnership with the Northeast Town, have converted the upper hall into a 27 individual acute/palliative care bedroom facility—with each room separated from its neighbour by plastic-encased walls mounted on two-by-four walls.

“The plastic is easily wiped down and sanitized,” Ms. Fields points out.

Each of the rooms host an electrically adjustable bed, an end table, a large stuffed chair with an easily cleaned surface, an IV pole for drip bags and can be accommodated with mobility devices such as wheelchairs and walkers, or portable commode chairs for those with difficulty moving about.

“There is a lot of evidence about how you should mobilize or support a person that has COVID,” says Ms. Fields. “So we will be able to elevate the head of the bed or put someone supine—laying immobile is not the goal.”

“We have an electrical plan for each of the rooms, for the electric beds obviously, but also so we can put in extra lighting,” says Mr. Vine. “We are going to have a wide range of people here, so there will be electric outlets to use to charge cellphones and other electronic devices.”

“We will also have limited wifi, but it probably won’t be up to streaming Netflix to everyone,” admits Ms. Fields.

The IV poles will be festooned with intravenous bags should the time arrive when they are needed, going old school in approach. Due to the logistical difficulties inherent in putting in 27 drip monitoring machines, nurses will go back to counting the number of drips per minute.

“We will be going back to some of the old ways,” Ms. Fields supplies, noting that retired nurse manager Mary Lynn Wright consulted on the setup and implementation.

Plying the rafters overhead will be a labyrinth of oxygen lines that can drop down into each of the rooms as needed.

A huge pile of boxes sit on the raised stage at one end of the upper hall. Within the boxes are face masks, each featuring an adaptor below the face and above the forehead to which hoses or filters can be attached. The masks are the brainchild of Bill Cranston. “They allow great vision and can be put on and taken off very easily,” shares Mr. Vine. “You don’t have the issue of your glasses fogging up.”

“Really, the catalyst for all of this has been Dr. Mike Bedard and Bill Cranston,” says Ms. Fields.

The stage at the far end will function as the nurses’ station, where monitors will be installed visible only to the medical staff.

Joining the matrix of oxygen pipes above the rooms are a bevy of cameras, aimed to allow for patient monitoring by the medical staff.

There is a balance to be maintained between privacy and clinical necessity, Mr. Vine points out. “The walls between each room are high in order to maintain patient privacy,” he says. “But the cameras will point down from above and only the health staff will be able to see the monitors.”

Another concession to logistical and fiscal necessity is the call system. “If need be, we can go back to the simple system of issuing hand bells,” says Mr. Vine, “again, going back to basics.”

As for the ubiquitous machines that go beep familiar to television medical dramas, if not modern medical reality, the cacophony of such an arrangement would be impractical given the open nature of the facility and the cost of monitors. “No, there won’t be beeping machines,” confirmed Ms. Fields.

The layout of the alternate care site is unidirectional, Mr. Vine points out. “Staff come in the main hall door, but exit through to the curling club.”

Following the management team through the created halls one arrives at a newly-built wall, the door through which enters into a small room. The first is where staff will doff their personal protective equipment, then into a room where their masks will be deposited into a vat of disinfectant. “They will be pretty much stripped down at this point,” says Mr. Vine.

Entering the next room, staff will change into their clothes before entering into the staff lounge/admin area.

“The kitchen facilities here are quite extensive,” noted Ms. Foster. “Our food services staff have toured the amenities and have come up with menus that can be made available.”

“I think at some time the leaders need to be acknowledged,” says Ms. Foster, referencing Mr. Vine and Ms. Fields for their contributions to the effort. “Without you two none of this none of this would have come to pass, you made it come to life with your teams.”

“It has been a huge effort by all of our facilities staff and the community volunteers who came in to help put this all together,” says Mr. Vine. “Thanks to the work Paula and her team did on what would be needed here they made it possible to hand a plan to Duane (Deschamps) and his team—and they ran with it.”

Ms. Foster also praised the contributions of M’Chigeeng Ogimaa Linda Debassige, whose drive and determination played a major role in the success of the efforts, as well as Mayor Al MacNevin and Northeast Town CAO Dave Williamson, whose efforts were focussed on ensuring the safety of the entire Island community.

Good news is apparently on the horizon when it comes to the financial side of the equation as well, as there has been verbal confirmation that funding will flow to help pay for the additional costs to establish this third, albeit ad hoc, Manitoulin Health Centre site.

The considerable resources that have been allocated to the alternative care site in preparation for a COVID-19 strain on Island resources will not have been in vain, even should the second wave not materialize. Plans are being formulated to incorporate the medical equipment into a distributed system of medical armouries or depots across Manitoulin once this crisis has passed so that these resources will be available to meet any future crisis or major emergency that might hit the region.

If there is a silver lining to the pandemic, it may well turn out to be that Manitoulin Island, along with countless other small communities and regions across the nation, will be better prepared for future emergencies. Not only will the equipment and critical infrastructure be in place to meet a future emergency, the protocols and processes will be firmly established.

“Before, there had been planning and discussions, but the result really all boiled down to words on paper,” says Mr. Vine. “Now we have actually done the physical work and put it in place.”