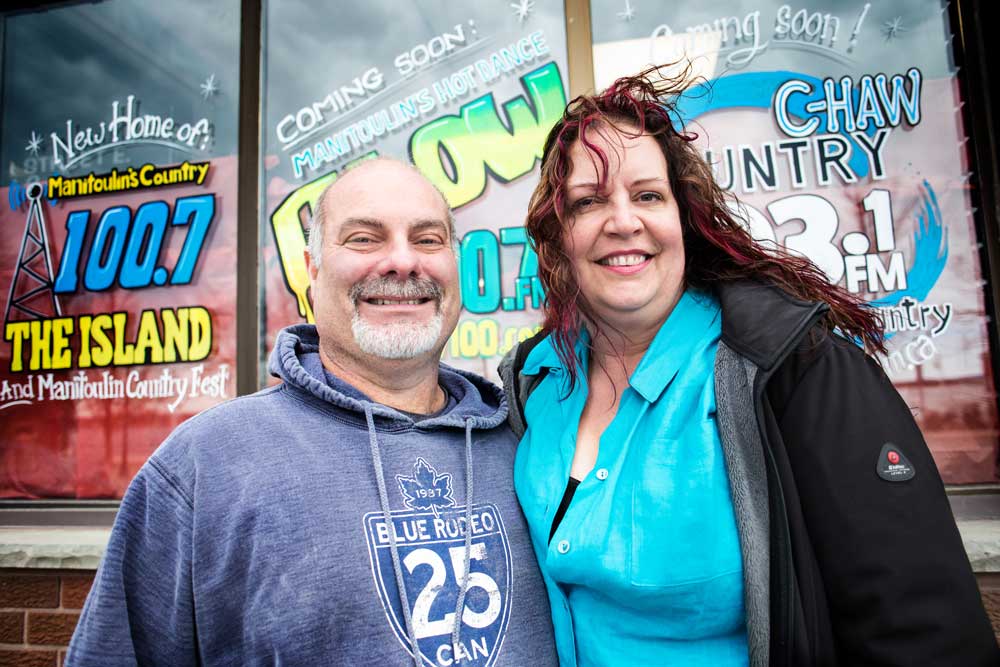 [quote_right]“People get excited when they come by our current office and see us in the studio, so we think the new studio on Water Street will be fun,”[/quote_right]

“When I originally built the radio station (currently 100.7 the Island), I built the infrastructure to handle a second station,” explained co-owner Craig Timmermans. “For the last five years we have been actively trying to get a second broadcast licence and recently our dream became a reality.”

“We will be turning the current frequency, 100.7, into a new dance station, Glow 100.7, which will be hot dance, top 40 and adult contemporary, but with a real spin towards the dance genre,” added co-owner Kelly Timmermans. “We decided to create the new dance station because we have seen a real shift towards hot dance music. It will also complement the FREC ME Festival.”

“The new country station frequency will be 103.1, Great Lakes Country,” continued Mr. Timmermans. “The new station will be high power and transmit to Sudbury, the Sault and past Parry Sound—having huge coverage, which is why we named it Great Lakes Country.”

Along with the new stations, the Timmermans will be moving their radio office and studio onto main street Little Current, setting up shop in part of the former IDA drug store on Water Street.

“We want our country studio to be really interactive,” Ms. Timmermans shared with The Expositor. “Our studio will be right at the front of the office with a large window looking out onto the street. It will allow myself and the other DJs to really interact and engage with local residents and tourists. The whole office is really open, with a lot of windows. It will also be great when we have artists in studio so that they can interact with their fans.”

“Ten years ago when I went down to Toronto to get our mixing console from another radio station, the studio was on the main street in downtown Toronto,” explained Mr. Timmermans. “I remember thinking how cool it was and how great it was for people to be able to see the DJs and interact.”

“People get excited when they come by our current office and see us in the studio, so we think the new studio on Water Street will be fun,” added Ms. Timmermans. “We are so excited for the new stations and studio.”

“We have been working towards this for a long time so it is really a dream come true,” Mr. Timmermans said.

Mr. Timmermans started his radio station in 2001, a dream within itself.

[quote_left]“During my teenage days I listened to Q92 in Sudbury and I always wanted to start my own station,”[/quote_left]

“During my teenage days I listened to Q92 in Sudbury and I always wanted to start my own station,” said Mr. Timmermans, “but like so many things in life, I put it on a shelf for ‘some day.’ Then in 2000 I started actively procuring a licence and in 2001 I was approved. Myself and Ian Wilkin picked CFRM for our call sign, Craig and Friends Rocking Manitoulin, and started a classic rock station.”

A few years later Mr. Timmermans would realize another dream, meeting the love of his life, his wife Kelly.

“I lived in Edmonton and Craig would visit me a lot and started being exposed to country music,” shared Ms. Timmermans. “We started looking at the demographic on the Island and eventually switched the station to country music in 2006.”

The rest is history as the pair went on to start the popular Island music festival Manitoulin Country Fest and last year, the FREC ME Festival.

Glow is already live streaming online at www.glow100.caster.fm and is set to hit radio waves at 100.7 this August/September as 100.7 The Island transitions to 103.1 CHAW Great Lakes Country.