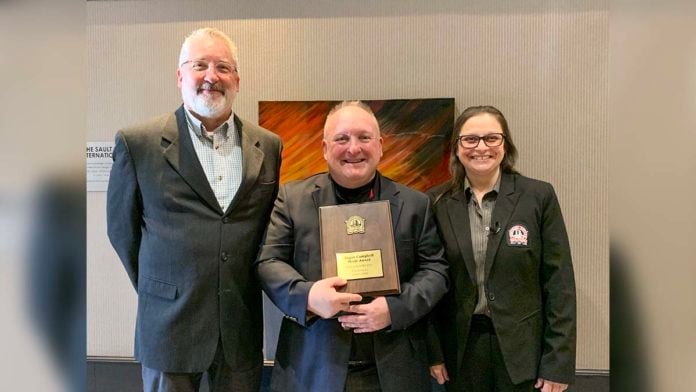 “I would like to welcome everyone here tonight for this first awards celebration of the Manitoulin Minor Hockey Association (MMHA),” said Mary-Jo Wabano, vice-president of the MMHA at the event held recently.

“It is such an honour to be here tonight to be part of this celebration,” said Gayle Payette, NOHA representative. “The Angus Campbell Award is named after the founder of the NOHA, given to an individual who has made outstanding contributions. Greg was selected unanimously, and his nomination received many letters of support.”

“Greg has been a trainer, referee, coach, schedule maker and much more, always displaying commitment, integrity and passion,” said Ms. Payette. “And he ensured that all officials are treated with respect,”

In its nomination for Mr. Lockeyer, the MMHA had forwarded a letter that stated in part, “when you think hockey on Manitoulin, a few names come to mind. One of them is Greg Lockeyer. With a history spanning 40 years, he has literally done it all. From coach to referee, to district and MMHA referee in chief, to ref assignor to scheduler.”

“Greg coached and was a trainer for seven years as his kids went through the divisions,” the MMHA wrote. “He was the trainer of the Telus Cup championship team in 2008 (which included his sons Justin and Devin as players) but Greg being Greg, modest as can be, he called himself the ‘chief skate sharpener’ as the portable skate sharpening equipment travelled with the team.”

“Greg has been an on-ice official since he was 13-years-old (roughly 40 years),” the MMHA noted. “The knowledge this man has is astounding, but what is more impressive is his delivery of it. Greg is always calm, cool and collected, no matter if he is on or off the ice. We have sat in meetings where he was verbally attacked, so to speak, and he remained unflappable and presented his opinion in a respectful and relaxed manner. For Manitoulin hockey, Greg is our go-to for any questions about officiating. He was the district referee in chief for NOHA for five years and 10 years for MMHA.

Mr. Lockeyer did extensive mentoring of new and young referees. “He taught numerous referee clinics for our young officials just starting out. No matter how heated things would get on the ice, there was always a strong presence and a calm demeanor with Greg,” continued MMHA.

“Parents, coaches and players would breathe a sigh of relief when he skated onto the ice. All our Island officials are amazing but when we know a game may be a bit difficult, we call Greg,” the MMHA wrote. “We can count on him and know that he is delivering the best officiating that he can.”

“Greg has done the scheduling for 23 years of Manitoulin MMHA, including the past year, and with the opening and closing due to the pandemic, he redid it, as he says, ’67 times,’ all volunteer and all on his own time,” the letter continued.

“What is truly remarkable is that after 40 years he continues to make himself available and always is positive and inspiring about hockey on Manitoulin,” wrote the MMHA. “Truly, there is no one in hockey on Manitoulin more dedicated than Greg Lockeyer.”

Long-time Manitoulin hockey official Bob Dumond wrote in part, “to Mr. Greg Lockeyer, finally some well deserved recognition. Congratulations on being this year’s NOHA recipient of the Angus Campbell Award. Greg, I’m not sure what to say. Your commitment to the game of hockey and contributions to minor hockey across this district cannot be quantified. NOHA could not have selected a better person more deserving of this award.”

“Greg, if and when you choose to step away form the game of hockey, it’s the game that will lose out,” wrote Mr. Dumond.

“My involvement started in minor hockey,” Mr. Lockeyer told the gathering. “When I was 13 I tried my luck as an official. My dad was my mentor, and another mentor down the line was Don Prescott. My current mentors are Gayle and Mike Payette.”

Mr. Lockeyer noted, “in 2008 both my boys, Justin here and Devin, played in Triple A and their team won the national championship. Those memories I will cherish forever. Their team beat a Winnipeg team that had Mark Strome. I would like to thank the MMHA for nominating me for this award. I am very humbled to receive this recognition.”

Ron Cooper, who received the Randy Thibault Memorial Award said, “Greg did a lot of things besides being a referee. As a ball player, he was the most dominant pitcher on the Island for awhile. He was dominant in any sport. And we all know how great an organizer Greg is, I can’t think of a better recipient for this award. He continues to give his all to all communities. Congratulations.”

Delroy Prescott, said, “I’ve known Greg for a long time. It was an honour to hear him mention my father as one of his mentors. My dad was the secretary/manager for Manitoulin Minor Hockey for 18 years. I would like to congratulate Greg on receiving this award.”

Son Justin Lockeyer told the gathering, “It’s clear I have big shoes to try and fill. I’m just happy for you, dad. This is a very well-deserved award. Without guys like you here there wouldn’t be NHL superstars.”

“When a person receives a lifetime achievement award, it means that you have committed a lot of time and effort. My goal as a kid, to be an NHL superstar, has changed. Now it is trying to get the same type of award you have received.” 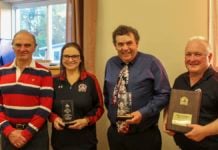 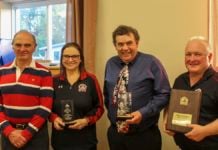 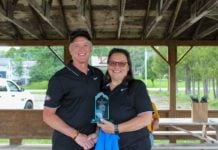 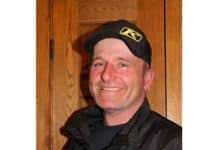 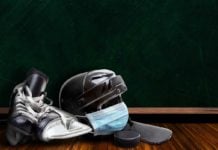