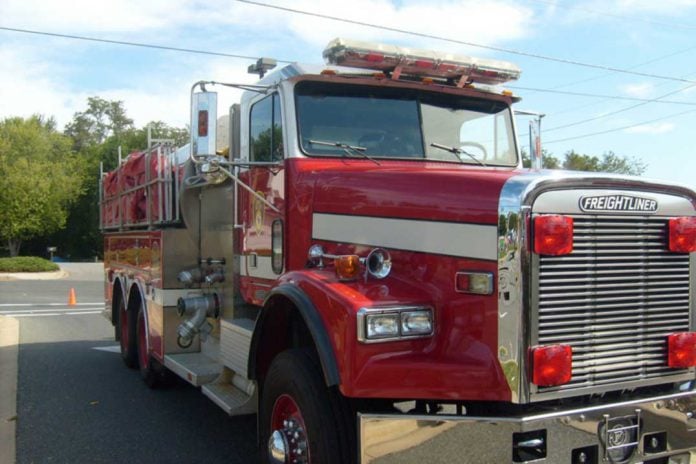 “The issue had originally been brought forward by the Central Manitoulin fire chief (John Reid),” said Lee Hayden, vice-president of the MMA.

Richard Stephens, mayor of Central Manitoulin told the meeting, “John (Reid) concerns were in relation to dialogue between fire departments and the central dispatcher for fire calls.” Mr. Reid had indicated that his fire department has been called out to fires in other neighbouring municipalities-after those fire departments had not responded to the dispatcher that they were responding. “John said they would then our firefighters would get into their trucks and respond to a call out to a fire or occurrence. Then they arrive on the scene and the fire trucks and the personnel from the neighbouring municipal fire department would be on the scene already. There has been communications problems.”

“From a municipal perspective, if a fire department responds to a (non mutual aid) call out of their area, there could potentially be some issues,” stated Mr. Booth. “If the second department goes in and damage is somehow done to their truck this damage may not be covered (under insurance) and there could be legal issues as well if they can’t respond to a fire in their own area at the same time-while they are fighting a fire in another municipality. They shouldn’t be going without administrative permission, although there is a moral issue as well.”

“There are currently no legislation for these protocols to exist, and responding to a fire outside your area,” said Mr. Booth.

Mayor Stephens explained in the case of Central Manitoulin, “our firefighters have been instructed if there is any call they need to go-respond to it.” However, this may open it up to liability. “If there is an accident I don’t know where the liability would lie.”

Mr. Booth said a fire department’s responsibility is for their own community and that responsibility ceases once they reach the border of their own municipality. “Once they cross that line they do not have the same authority legally.”

However, Mr. Booth said, “if fire service agreements are in place between municipalities then it would be fine.”

Al McNevin, mayor of the Town of Northeastern Manitoulin and the Islands (NEMI), said “most of us have mutual aid. The fire department (where an incident is occurring) has to invite other municipalities to respond.”

“Maybe this is something as municipalities we can all work on (agreements) so the response to fires can be automatic,” suggested Mayor McNevin.

“We need to make sure there is proper and legal coverage,” said Brian Parker.

“I think we should do it, and have these automatic response fire agreements in place,” said Mayor McNevin.

“None of us wants a situation that our firefighters are at the municipal border, and can’t help out in a situation where there is  a fire taking place across the road,” said Mayor Stephens. “I would like to see these type of agreements in place.”

“The best thing would be to put the agreements in place,” said Mr. Booth. “At the end of the day these agreements have to be approved by municipal councils so fire departments can respond and have legal authority.”

“If council agrees that their fire resources can respond over their municipal boundary when needed, and the neighbouring municipality has to agree as well,” said Mr. Booth. “Once the agreements are in place  you’re allowing them to respond to fires, onto your property. But the home community fire department is still expected to show up and take over responsibility for the situation on their arrival. It’s about sharing the resources you have. ”

A motion was passed by the MMA members to have MMA secretary Bonnie Bailey work with Mr. Booth and CAOs on the agreements, and have them go to the municipal councils for their support.

“The biggest thing is trying to protect the people in and our communities,” stated Mr. Parker.