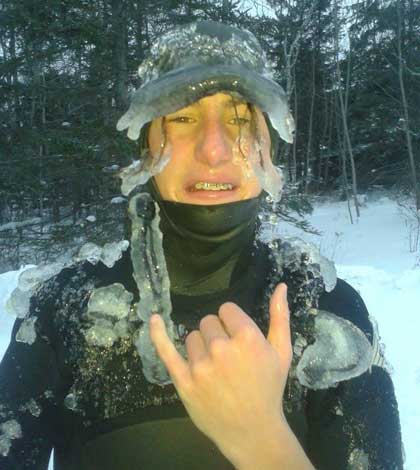 MANITOULIN—Manitoulin Island is known for great boating, hunting, fishing and wildlife, but a new activity has been added to that list: freshwater surfing.

Freshwater surfing has been growing in popularity over the last few years, with Manitoulin earning a reputation as having great waves.

Islanders Ryan and Chris Cooper grew up on Manitoulin, but didn’t know about the potential in their own backyard until a trip to Costa Rica.

“We were on a family trip to Costa Rica two years ago when we saw a man with a shirt that said Surf Ontario,” explained 16-year-old Ryan. “We had been learning to surf on the trip and loving it, so our mom went over and asked about surfing in Ontario. He explained it was a store in Toronto and that there were a lot of freshwater surfers (that surf the Great Lakes).”

Ryan said when they returned from their trip, he and his brother began doing research and found a video of a Sudbury woman surfing on Manitoulin.

“Her name is Helene Filion and we contacted her and she took us out and got us started. She actually teaches freshwater surfing and surfs the Island a lot so she showed us the spots,” he said.

“Actually, the best time of year to surf is in December,” Ryan continued. “It’s the windiest time. We have special wetsuits that are six millimeters thick and our gloves and boots are eight millimeters thick—you stay pretty warm and we put Vaseline on our faces to protect us from the wind.”

The Expositor also spoke to Ms. Filion, who along with her partner Antonio Acuna, teach freshwater surfing in the Sudbury/Manitoulin area.

“The waves are biggest in the fall/winter, but you can still pretty much surf year round across the province,” Ms. Filion said of the surfing season in Ontario. “Around here there are only about three months when you can’t surf because there is too much ice, but there are places in southern Ontario where you can go all year,” she explained.

Ms. Filion said she got hooked on surfing five years ago on a trip to the west coast.

“When I came back I started looking into surfing on Manitoulin,” she explained. “I grew up spending my summers on Manitoulin, so I started looking at bathymetric maps around the Island. Sandbars and reefs create breaking waves, which are needed for surfing. I studied a couple of places and started driving back and forth checking on them. After I found a few good places I started surfing and encouraging others to try. I knew that there was a huge group of surfers in Toronto, but I wanted to put Manitoulin on the map.”

Last year Ms. Filion and her partner launched their own surf school based in Sudbury called YouSurf.

“Freshwater surfing is a great way to enjoy the lakes,” she said. “It’s an activity that is environmentally friendly and encourages people to take more of an interest in the health of our lakes.” 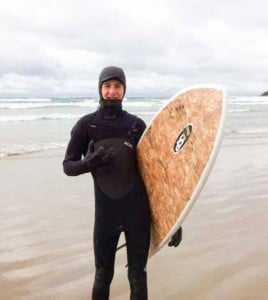 One of Ms. Filion’s favourite spots to surf on Manitoulin is Square Bay.

She explained a point break is when the wind comes in parallel to a bay and wraps around a point, creating a smooth wave that makes for great surfing.

Chris shared that one of he and his brother’s favourite Island surf spots is Carter Bay, “which is good for a south west wind.”

“I enjoy the sport because it’s unique and challenging, it is great because it gives us something super fun to do during the windy days when skateboarding and snowboarding are challenging to do,” added 19-year-old Chris, who is in his second year of Health and Fitness Promotion at Georgian College.

For those interested in trying freshwater surfing, Ms. Filion said that the season reopens on Manitoulin in March/April. A wet suit and surfboard are the only supplies needed and are available locally from YouSurf, along with lessons (boards and wetsuits are provided for lessons). For more information visit www.yousurf.ca.

To check out videos of Ms. Filion surfing on Manitoulin visit www.youtube.com/user/surfonics.