MANITOULIN – Rescued porcupine Sarah Juniper (a name that her rescuers later gave her) has returned to her Manitoulin Island home from a stint in medical rehabilitation as a healthy, young rodent who is enjoying being back in the familiar forests of her youth.

Sarah Juniper had a tough start in life. In her first year, she became entangled in wiring and got stuck in a fence, where a concerned Kagawong resident reported her dire straits to Rainbow Rescue’s Bleu Fisher in October of 2020.

Ms. Fisher captured the prickly critter and brought her to Island Animal Hospital to address her immediate medical needs.

Veterinarian Janice Mitchell set to work and her colleague Dr. Jo Paquet removed the wire, which had cut so deeply into her body that her esophagus was visible. The vet administered pain medication and antibiotics, as well as Dr. Mitchell’s own raw natural honey, which she said had medicinal qualities in that application.

“Bleu’s our only contact for wildlife (rescues); we don’t have anybody else,” she said.

Dr. Mitchell featured Sarah Juniper’s story in her November 18, 2020 Paws for Thought column in this newspaper.

They soon determined that Sarah Juniper would need longer-term support to make a full recovery, so they first consulted with Gloria Morissette at Turtle Pond Wildlife Centre in Sudbury, who suggested they take Sarah Juniper directly to Aspen Valley Wildlife Sanctuary in Rosseau.

Wildlife animal care supervisor Paolina Lloren said Sarah Juniper was a welcome addition and got along well with another porcupine in rehab over the winter.

“She first went through an intake exam and then we made sure she didn’t have any parasites. Then, we gave her some medicine for her wounds as she had some extensive lacerations across the abdomen,” Ms. Lloren said.

The stint in Rosseau offered Sarah Juniper the thing she needed most to recover—time.

“She was a pretty good patient; relatively easy as far as porcupines go. Their really sweet, docile temperaments make them good to work with,” said Ms. Lloren.

The costs to rehab Sarah Juniper were somewhat average, she said, but were pushed because she required a specialized leaf-eater diet that involved a variety of foods to ensure she would not become nutrient deficient.

In addition, her rehabbers had to spend time scouting and taking her to locations of natural growth that would match her natural diet, so her reintroduction back in the wild would be less stressful and more comfortable.

That can add up to a significant cost burden for centres such as Turtle Pond and Aspen Valley, which rely on donations and volunteer efforts to survive.

Ms. Lloren encouraged anyone who has the ability to donate either their time or some funds to help support the operation to do so through Aspen Valley Wildlife Sanctuary’s website.

“These sanctuaries, they need more publicity. They need help,” Dr. Mitchell said of the volunteer groups that provide important medical care to rescued creatures of all kinds.

“(Turtle Pond is) the only centre north of Parry Sound, except for one that just opened in Thunder Bay,” said Ms. Morissette. “To try to serve an area of Northern Ontario that large, we rely on people in different areas to help with transport or help with at least connecting with me.”

Ms. Morissette credited Ms. Fisher for being the Island’s co-ordinator for rescuing animals and helping to triage the requests that come into the centre to avoid it becoming overwhelmed.

“We do rely on donations and volunteers like Bleu to keep operating because we don’t get any funding from sources other than the general public that want to help us out,” she said.

Last week, Ms. Fisher and Ms. Mitchell picked up Sarah Juniper and brought her on a road trip home to the Island, where they released her into a woodlot away from farm or residential properties.

“They wanted her to come back to her original place; plus, there’s a lot more cottagers down there so she’s actually safer here,” Dr. Mitchell said, adding that they took time to find a good location away from where people live.

Porcupines sometimes carry a negative reputation, which Ms. Lloren attributed partly to times when they get into fights with dogs.

“They’re not aggressive at all and don’t go after people or animals; they just sit in trees and eat all day,” she said, adding that porcupines’ quills are only a defence mechanism if another creature gets too close and touches them so they fall off and sometimes get stuck in the attacker.

“(Quills are) their defence mechanism. Once you get rid of that, they’re screwed, and they will only do that if they’re absolutely threatened,” Ms. Fisher said.

Dr. Mitchell emphasized that they lack the ability to shoot their quills, contrary to an urban legend, and Ms. Fisher said people can even pet captive porcupines—but only in one direction.

Ms. Mitchell explained that porcupines tend to avoid conflicts because it takes a long time to regrow their quills, during which period they lack appropriate defences.

Sarah Juniper’s shyness was on full display when Dr. Mitchell and Ms. Fisher returned across the swing bridge with her in a small crate in the back hatch of the vet’s car—packed safely among a carload of beekeeping supplies and a small dog up front.

One-year-old Sarah Juniper’s new home is also home to another young porcupine, so the rescuers hope she will hit it off.

Ms. Fisher urged anyone who finds injured wildlife to contact her through Rainbow Rescue. She serves as the first contact in the care journey to provide basic assistance and filter referrals to avoid overwhelming the intensive support centres like Turtle Pond. 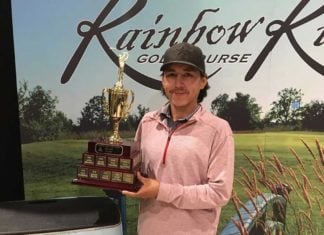