LITTLE CURRENT—The 348 Manitoulin Royal Canadian Sea Cadets held their 12th annual ceremonial review this past Sunday, demonstrating the disciplined work the cadets put into their training this past year.

The ceremony started with colours and the ship’s company falling in prior to O Canada. Following the national anthem, there was a minute of silence for members of the Canadian Forces veterans, past and present.

Lieutenant (Navy) Denis Blake was the master of ceremonies for the afternoon and welcomed parents, community members and distinguished guests to the event.

The reviewing party was led by Jeff Marshall. “Mr. Marshall was born and raised in Little Current,” said Lieutenant Blake. “After he completed school, he joined the Royal Canadian Navy in 1952. He served on a number of ships including the HMCS Lauzon, a frigate, HMCS Restigouche, a destroyer, and the cruiser HMCS Quebec (previously named the HMS Uganda).”

“Mr. Marshall’s long time friend, (the late) Ed Kift, served on the Uganda during World War II,” continued Lieutenant Blake, noting that Mr. Marshall returned home to Manitoulin in 1978 after working in Brampton in the manufacturing industry. “Mr. Marshall was one of two individuals responsible for the formation of 348 Manitoulin Sea Cadets.”

“Fourteen years ago, a group of Navy veterans led by the late Ed Kift and Jeff Marshall of Little Current had an idea to form a Sea Cadets Corps on Manitoulin,” explained Lieutenant Blake of the history of the Corps. “Between 2002 and 2004, the Manitoulin cadets were a division of 134 Admiral Mountbatten Sea Cadet Corps at Sudbury. These veterans drove a group of cadets weekly for training to Sudbury.”

Lieutenant Blake noted that many former Manitoulin Sea Cadets have distinguished themselves and have become leaders in their community, business, civil service and the Canadian Armed Forces. “The Corps receives many compliments on the behaviour and professionalism of their cadets on parade and in the community,” he said. “The Corps has done very well in many competitions throughout the year which have included seamanship, orienteering and marksmanship competitions.”

He credited the Cadet Regional Detachment and the Navy League of Canada, specifically the Navy League Branch of Manitoulin, for supporting the Corps and the hard work of the cadets, officers and civilian instructors that come together to make the program a success.

Next on the agenda, the cadets conducted a drill without arms routine led by Chief Petty Officer Second Class Rebecca MacDonald.

“The band was formed in 2014 under the tutelage of civilian instructors Chantal Beaulieu and Tina Davison,” said Lieutenant Blake. “The corps was able to purchase instruments after a generous donation by the Little Current Lions Club.”

There were several awards presented as part of the program, including a new one.

The Most Improved Cadet Award for the cadet who has demonstrated a drive to work towards increasing skills in dress and deportment, drill and mandatory classes, was presented by UCCM Police Chief Rodney Nahwegahbow to Able Seaman Ryan Jones.

Petty Officer First Class Ben Sayyae received the Brian Chapelle Outstanding Citizenship Award, for being a cadet who is a good citizen and who strives to make a worthwhile contribution that benefits the country as a whole, by Mr. Chapelle of the Manitoulin North Shore Navy Veterans Association.

The Top Marksmanship Award, that goes to the cadet who consistently achieved the top score in both practice and competition, was awarded to Petty Officer First Class Nick Harper by Marksmanship Coach Acting Sub Lieutenant Tara Pascoe.

The Male Proficiency Award, to the cadet who has demonstrated excellent qualities of leadership by influencing cadet behaviour so as to accomplish a mission in the manner desired by a leader, was presented by Manitoulin Secondary School Vice Principal David Winchar to Petty Officer First Class Quinton Cosby.

The Navy League Cadet Service Medal is presented to a cadet who has served four full years in a Sea Cadet Corps.  Lieutenant Blake announced that this year there were six cadets that have earned the medal.

The Legion Medal of Excellence is given to a cadet in recognition for individual endeavours in citizenships, which meet or enhance the aims and objectives of the cadet movement. This year’s award was presented by Branch 177 Royal Canadian Legion Little Current representative Comrade Roy Eaton to Petty Officer First Class Nick Harper.

The Legion Medal of Excellence for the Gore Bay Legion Branch 514 was presented by Comrade Eaton to Petty Officer Second Class Miranda MacKay.

“The Aging Out Award goes to a cadet this year who has turned 19 years of age in 2016 and will be completing their cadet career,” said Lieutenant Blake. “This cadet has indicated that he plans to pursue a career in the Royal Canadian Navy at the end of his schooling.”

A first this year, the Kagawong Cenotaph Committee awarded a bursary to a cadet who is attending post secondary education.

Chief Petty Officer Second Class Rebecca MacDonald received the Lord Strathcona Trust Fund Medal, the highest award that can be bestowed upon a cadet in recognition of exemplary performance in physical and military training.

“Not only is she (Rebecca) the second highest ranking cadet at the corps, she plays the bagpipes at an advanced level, maintains a high level of physical fitness and in 2015, she earned the distinction as the top cadet at Cadet Summer Blackdown,” said Lieutenant Blake.

Mr. Marshall addressed the crowd and cadets, saying what a pleasure it was to be able to be the reviewing officer and to attend the ceremony.

MP Carol Hughes also addressed the group, noting that her daughter had been part of the Sea Cadets and that it was a rewarding experience that they would carry over into their future endeavours.

Mr. Jewell also thanked the group for attending and commended the cadets on their hard work, as did Lt. King-Roi and NOA Reid.

The event concluded with refreshments. 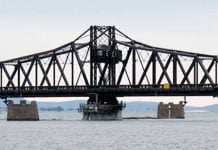