SUDBURY—The Manitoulin Swing Band opened up the annual 2021 CTV Lions Children’s Christmas Telethon this past Saturday and the two songs they played were once a staple of the Gore Bay Orchestra’s playlist but haven’t been performed in many years.

“We start the telethon as the first performers at 2 pm on Saturday,” Doug Smith, one of the band’s long-time members, told The Expositor last week, a couple of days before the telethon event. “We’re playing two tunes, the Dark Town Strutters’ Ball and Basin Street.”

“We played the Dark Town Strutters’ Ball as the Gore Bay Orchestra from 1948 to 1965, a total of 17 years. We used to play that piece at every dance to get people dancing…we needed something with some zip to it,” stated Mr. Smith, noting every summer the band members would play three or four concerts a week on the Island, and every band member also worked during the days.

“And we played Basin Street a lot in the 17 years before the band dissolved in 1965,” recalled Mr. Smith. “We didn’t play either of those songs in almost 50 years. “So, we had to play them two or three times together (before the Christmas telethon) to make them sound reasonable.”

For the 125th anniversary of the Town of Gore Bay, Mr. Smith had detailed the history of the Manitoulin Swing Band and its forerunner, the Gore Bay Orchestra. “The early years of the Gore Bay Orchestra may be lost forever, but we have done our best to reach back as far as possible. Someone told me years ago that on the whole of Manitoulin Island and the North Shore, Gore Bay was the best place to go for jazz music. When I contacted John McQuarrie to see if he could help me out by reviewing the early years of the Recorder, he came up empty handed.”

These anecdotes about the Gore Bay Orchestra were compiled in conjunction with a concert the Manitoulin Swing Band gave several years ago on Gore Bay’s 125th anniversary as an independent town, and he shared them with this reporter.

“My earliest recollection of music and dances on the Island was when, at a very early age, our family went to our cottage at Tobacco Lake in the summer months,” said Mr. Smith. “Our cottage, in what was called the Tobacco Lake Dance Pavilion, was owned by my grandfather Fred Smith and his brother Bill Smith; the Smith Brothers. Like most kids, I didn’t know anything at that stage of my life or question anything. In the summertime, on weekends, the Tobacco Lake community used to gather around a bonfire at the horseshoe pit and listen to music. It was there I learned that Debb Johnson played a variety of instruments and George McRae played cornet.”

“At our house in town, my mother played piano and my father drums and other percussion instruments. The sheet music on the piano had my mother’s maiden name, Reta Burns, on the front page as well as Tom Porter. When I asked why Tom Porter’s name was on some of the sheet music, I was told that my mother and Tom used to play in the Gore Bay Orchestra before I was born.”

“The next exposure I had to jazz music was in 1945 at the end of World War Two when at 12 years old I was invited to go with my father to a war end celebration at Mrs. Frank  Priddle’s, across the street from our house. Coral Priddle played the piano, my father the drums, other musicians sat in, and they played great music that I had never heard before. I was really impressed and when I asked more questions I was told that at one time Mrs. Priddle had played in the Gore Bay Orchestra. Wow!” continued Mr. Smith.

“With the help of Tom Porter’s family; Marianne, Marg, Rob and Molly Anne McLaughlin (nee Priddle) plus what I knew, we were able to piece together the following facts about the Gore Bay Orchestra. It probably started long before the history we have gathered which dates back to the roaring 20s. Mrs. Sandy Burns (nee Porter, my grandmother) was good on the piano and earlier could well have been part of the Gore Bay Orchestra. Musicians came and left over the years and came from all parts of the Island, but the anchors were always in Gore Bay. There is no doubt we have missed many musicians from our list, but we have done our best.”

“Some of the earlier group that we could include are George (Debb) Johnson, probably on banjo and autoharp, George McRae on cornet, and Howard Hall on drums,” said Mr. Smith.

“But the Gore Bay Orchestra played on,” continued Mr. Smith. “The next group, which took over in about 1923, were Reta Smith (nee Burns) on piano, Tom Porter on violin, Bus Clarke on tenor sax, Fred Smith on clarinet, and Frank Major on drums. Tom was the entrepreneur who took the financial risks and was the anchor from 1924 on into the 1930s. Marg Porter supplied Tom’s notes and bookkeeping of his experience with the band at the Tobacco Lake Dance Pavilion in the years 1927, 1928 and 1929, the start of the Great Depression. Those notes showed that, “although he had lost money, they had a great time and a lot of fun.” The band continued to play well into the 1930s with some replacement musicians. Coral Priddle (nee Hunt) replaced Reta Smith about 1933 on piano. During the war years there wouldn’t be much music played.”

Mr. Smith explained, “every year, the two largest dances were on New Year’s Eve and the Sailor’s Ball. At the latter, all the sailors on Manitoulin Island gathered before they returned to the Great Lakes boats for the next year’s season. For the Sailor’s Ball in 1947, I don’t believe there was a Gore Bay Orchestra as the Wikwemikong Orchestra was hired for the occasion. On that day we had a bad snowstorm and the band could not get to Gore Bay for the dance.”

“There was no such thing as DJs in those days. Tom Porter and George Purvis Sr. rounded up anyone in town who had ever played a musical instrument and assembled a band for that night-Frank Cotton (the agricultural rep.) on piano, Doug Tighe on tenor sax, Jim McRae on trumpet, Frank Major or Cliff Boyd on drums, and a couple of boys, Blake and Doug Smith ages 16 and 14 with trumpet and cornet respectively. Collectively we could only play about 10 tunes, but we played from about 11 pm to 3 am. I don’t suppose anyone realized that we may have played the same tunes over and over again. They had sold something like 600 tickets for the ball, standing room only shoulder to shoulder, which occupied most of the dance floor.”

“The following year, a few of us decided we should start a small band to fill the void and what better name to call it than the Gore Bay Orchestra. Eileen (Maw, Mrs. Cecil Lloyd) on piano, Bob Wiseman on drums and fiddle, Virginia Smith (Mrs. Milf Smith) on violin, and Doug Smith on cornet. I borrowed a set of drums, that belonged to the town, from Debb Johnson, and a cornet from George McRae, which Bob Wiseman later bought and still plays. Each of us knew a few tunes. At each dance we would practice a new tune to add to our repertoire.”

“In 1965 the Lloyds moved to Falconbridge to work for Falconbridge Mines where Bob Wiseman had gone 10 years earlier. In the 17 years the Gore Bay Orchestra had performed, Maw Lloyd had been spelled off on the piano by Lois Graham, and in the 1960s by Margaret Smith, Jim’s mother,” Mr. Smith wrote.

“Every Tuesday night during the navigation period, when the Normac, Norisle, and Norgoma, boats of the Owen Sound Transportation Company, used to come into the dock at Gore Bay, the band played at the Gore Bay Community Hall to entertain the boat passengers along with  the other tourists and locals. After the boats stopped operating, the Orange Hall in Kagawong and later the dock in Kagawong is where the dances were held on Tuesday nights during June, July and August. Friday nights were always reserved for Mindemoya, and Saturday nights for Sandfield in the old hall. Wedding dances were in halls all over the Island, and when this occurred in the summer months, it meant the band had to play four nights a week.”

“With the exception of Saturday nights, when the law required that we stop playing at midnight, the dances started at 9 pm and ended at 2 am with a half hour lunch at midnight. The average time we got home was 4 am, and we had to be at work at 8 am.”

“The pay varied slightly over the years and gradually worked its way up to $10 each per night; $7 at Sandfield. The band had a lot of followers from all over the Island. 1965 was the end of an era. A grand time was had by all, but it was time to move on,” wrote Mr. Smith.

“With the Gore Bay Orchestra disbanded, the remaining members were lost,” wrote Mr. Smith. “The sheet music was either lost or worn out, so the musicians had to learn to play by ear. There were always parties and dances that required a band, usually only requiring three or four musicians. Nickie Hinds joined one of these smaller groups as pianist. Sometime in the 1970s Herman Peltier surfaced again as our pianist. He had spelled off Maw Lloyd on Saturday nights at Sandfield for the square dances, and he played at many places around the province and in the US before returning to the Island. Herman, with the remnants of the previous Gore Bay Orchestra, Doug and Norm Hore, Doug and Jim Smith, Bob Wiseman, and Oliver Runnalls, joined later by Joanne Smith, got together to form the Manitoulin Swing Band.”

The band played on numerous occasions for anyone enjoying traditional swing and jazz music, a lot written before and during the 1920s plus the wartime songs of the 1940s. They played for Jeff Wiseman’s official launch of his musical career in the auditorium of the Sudbury Secondary School. Also, the band played at the Masonic Hall in Sudbury for one big night which Norm arranged. Over the years, we have played at restaurants, halls, curling rinks, churches, homes for the elderly and community gatherings all over the Island.”

And this past weekend, the Manitoulin Swing Band was the official first act for the 2021 MCTV Lions Telethon, the 73rd edition of the event that raised more than $287,000 for children that night. 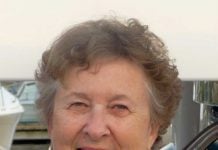 Phyllis Smith was a pillar of the Gore Bay community