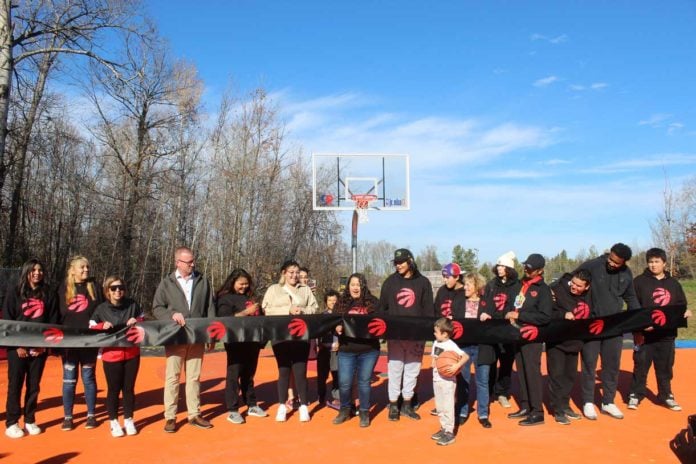 SHEGUIANDAH—Not only will it provide a place for kids in Sheguiandah First Nation to develop as athletes along with having fun, it is also going to be a community hub. The new basketball and skateboard park (and fire pit that will be used for community events) that was officially opened this past Saturday is a great demonstration of partnership between the band council, youth in the community and several partners.

“This reimagined basketball court is an investment in the well-being of the community,” stated Algoma-Manitoulin-Kapuskasing MP Carol Hughes at the official grand opening. “Not only for the youth but as a gathering place for the community.”

“This project demonstrates how partnerships can be so effective,” Kendra Kerr, manager of community investment for Maple Leafs Sports and Entertainment (MLSE) Foundation told The Expositor. “This project was led by what the community wanted, especially the youth in the community, and everyone worked so hard in getting this completed. It all came through within a year, from consultations to the finish.”

“We are very excited to see this day come,” added Ms. Kerr. “This project was definitely a partnership, of the National Basketball Association (NBA), NBA Canada, MLSE, the Toronto Raptors and the community. Support was provided as a celebration of the NBA 75th anniversary celebrations. The Sheguiandah First Nation youth have been involved right from the start, from the design and vision, and they have had support from the band council and the community from the start.” “We are here to celebrate the opening of this basketball court and skateboard park with the community,” said Ms. Kerr. “We had partnered with Sheguiandah in the past, and the need for more outdoor play areas. They were very excited and really helpful in this project, and the youth in the community have been very involved from the beginning. You will see the many youth wearing shirts with “Court Champions” on it today, these are all the youth who were involved in the project.”

Zoe Roy, youth representative of the Sheguiandah First Nation Youth Council, was master of ceremonies for the opening. “It is nice to see everyone here and enjoying this project. I’m excited to be here today.” She explained, “A youth committee was formed in the community in September 2021 and with the support of MLSE Foundation in celebration of the NBA 75th anniversary, through pandemic material delays, this project has been completed. A lot of work has been done by a lot of people into all of this,” said Ms. Roy.

Ms. Roy had explained previously the project was youth led and driven, and the proposed plans were brought forward to band council in late 2021. Council gave their approval for the project in late fall. The MLSE Foundation had called, asked about the project and indicated they wanted to be part of the sponsorship of the courts and wanted to work with the community. They provided funding support for the project.

Pearl Waindubence, a Sheguiandah band councillor and elder in the community explained at the opening , “we will take part in a smudge around the whole area where the kids will be playing, then I will say a prayer.” After Ms. Waindubence provided a prayer, a special song was performed by Eric Assinewai. “Have fun, and enjoy this new basketball court and skateboard park,” stated Ms. Waindubence.

“Before we acknowledge all of our supporters and guests here today, we want to acknowledge the many youths of Sheguiandah who were essential in getting this project going. The ‘Court Champions’ helped with the design and plans right from the start to the finish,” said Ms. Roy. “The court was also made possible only with the partnerships that we had.”

Sheguiandah Chief Elvis Mishibinijima said, “This project was made possible by contributors Maple Leaf Sports and Entertainment, Toronto Raptors, Sheguiandah First Nation, Pioneer Construction, Ellis Don. Businesses that worked on the project included Ellis Don Construction, Contact Administrators, ERA Architects, E Corbiere and Sons, JJ Poleline, Englobe, M and G Fencing, Emily Kwewageshig (an artist who did the logo design on the basketball court). Court Surface Specialists painted the design. Suppliers included Ramp and Rail, Skate Ramps, Quest Stone Quarries, Armour Stone, Ferguson’s Cottage Supply Company, M and G Fencing and JJ Poleline. “We need to congratulate the youth group coordinators on this project,” said Chief Mishibinijima. “This project would not have been made possible without the youth in the community. This project has been led by the youth right from the start.”

MP Hughes provided greetings of her own and on behalf of Algoma-Manitoulin MPP Michael Mantha. She presented a congratulatory scroll to Chief Mishibinijima and the community. “I want to take this opportunity to congratulate the chief and community of Sheguiandah. Congratulations on this very impressive accomplishment. It is truly remarkable what has been done here, for the youth and by the youth and council, MLSE Foundation and partners. It is an example to other communities to follow.”’

Bridgette Estrella, management director of MLSE Foundation said, “thank you so much for all being here today. MLSE believes in the power of sport, and in community. This project all came together within a year and a half and included partnerships with E.R.A. Architects, Ellis Don, the Sheguiandah First Nation community, and the youth who put their love and passion into this. This will be here for generations to enjoy.”

Randy Reymer, regional area manager for Ellis Don said, “this project would not have been done without the youth in the community, your enthusiasm, motivation and vision. I would like to thank MLSE and the Foundation and thank you for allowing us to be a part of all of this. I thank Sheguiandah council and the community for the opportunity to work with you and for welcoming us into the community.” “This is a very positive project the community, MSLE, Ellis Don and all the partners in this project, they many Manitoulin Island and Indigenous partners who helped in constructing these courts,” said Mr. Reymer. “Thank you for allowing us to be part of this.

John Wiggins, regional vice-president organizations, cultural and social impact with the Toronto Raptors said, “I would like to thank you for allowing the Raptors, MLSE Foundation to be part of this project. Sheguiandah is part of the Raptors Nation and we are proud to be part of the Sheguiandah community. This is for the youth, who designed and were a part of this project from the start.” “This is the first basketball court we have built in an Indigenous community, but it won’t be the last,” stated Mr. Wiggins.

The Sheguiandah community presented gifts to all of the sponsors, supporters and contributors to the project. For the rest of the afternoon, several Raptors youth basketball skills development coaches and children of all ages took part in fun basketball skill games and drills. “We think of this as community space for the future of the youth and the community. We are very happy to have been part of all of this,” said Ms. Kerr. To close out the day a community dinner was held at the Anchor Inn in Little Current, courtesy of the Toronto Raptors. 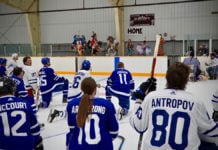 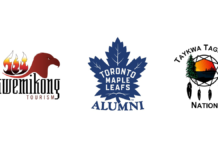 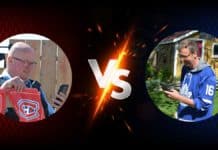 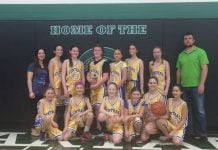