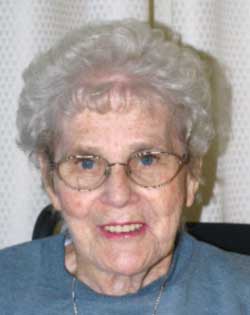 May 4, 1929 – March 27, 2017
Margaret passed into the presence of her Lord and Saviour on March 26, 2017 at 12:01 pm, at the age of 87. Margaret lived in M’Chigeeng with Stan as missionaries with the Northern Canada Evangelical Mission (NCEM) for almost 40 years, serving side-by-side as active missionary partners. After Stan passed away in 1998, Margaret continued to maintain an honorary position with the Mission until her passing. She walked closely with her Savior and exemplified Christian love in all she did and said. She was raised in Footes Bay, Ontario, the daughter of a CPR train engineer, Charles Lusk, and his wife Mabel (nee Green). She was one of twelve siblings. Surviving brothers and wives and sister include: Ken Lusk, Edward Lusk, Leith and Nancy Lusk, Howard Lusk, and Violet “Jo Jo” Poitras. Mom was a caring and loving mother, grandmother and great-grandmother. She was a confidante to many of her family; supporting her family whenever needed; and a prayer warrior. Her call home was both a blessing and a sadness to her family. Her last years were impacted by deteriorating health and her time was spent in the Centennial Manor in Little Current. In the end, her suffering was minimal and her family had time to be with her in her final moments. She will be missed by her children, grandchildren, chosen grandson, great-grandchildren, great-great-grandchildren and other extended family: Fay and Lyman: Mark (Denise), David (Jen), April (Howard), and Tammy (Scott) and their children and grandchildren; Linda and Allen (predeceased): Kim (Ernie) and her children; Richard and Mariam: Shannon (Brad) and Shawn (Jamie) and their children; Robert (predeceased); chosen daughter Nancy (Mike): Bobby-Jo (Jay) and their children, Tanya, and Mickey (Ron); Pamela (David): David Jr. (Gabbie), Adam (Josee) and their child, and Victoria Justin (Faye); Jordan and Lucas; Debbie and Beverly: Scott and Trevor; Stan and Mia (fiance) (Liz predeceased): Nat (Rebecca), Bethany (Dakota), and Kailee; Michal and Gord: Alexandria and Tyler. Family and friends will gather at Grace Bible Church, Little Current on Wednesday, March 29, 2017. Visitation from 1 pm. Funeral Service at 2 pm. Burial at Whispering Pines Cemetery, M’Chigeeng. In lieu of flowers, donations requested to Northern Canada Evangelical Mission or Native Evangelical Fellowship. Record your thoughts, memories and photos at www.islandfuneralhome.ca.