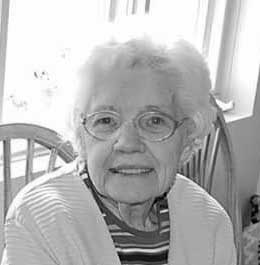 Marjory Olive Springer went to be with her Lord on Tuesday, May 5, 2015 in her 92nd year at Nithview Community, New Hamburg, Ontario. She was born Marjory Olive Ney, August 10, 1923 at Cecebe, Ontario, the second child of Stewart and Olive Ney. Marjory is survived by her husband Paul. They were married in 1945 and were blessed with 70 years of marriage. They lived in Orillia for the first few years before moving to Sudbury in 1947. They later moved to Copper Cliff where they lived for over 20 years. After Paul’s retirement they moved to Providence Bay where they enjoyed another 20+ years together. Recently they have lived in New Hamburg, where her and Paul have been residents at Nithview Community. Marjory was predeceased by four brothers Gordon, Carl, Elgin and Stanley and one sister Elinor and is survived by a younger brother, Reginald (Carm) Ney, of Toronto. Marjory and Paul had five children, Albert (Grace) of Peachland, BC; Shirley (Roy) Erkila of Sudbury, ON; Sharon (Peter) Pasivirta of Vancouver, BC; Mary (Rick) Schmidt of Baden, ON and Doug (Marni) of London, ON. She is survived by 12 adult grandchildren, Melodie (Darren) Schlamp of Kelowna, BC; James (Vicky) Springer of Peachland, BC; Joel (Robyn) Springer of Kelowna, BC; Jonathan (Karen) Springer of Kelowna, BC; Paula (David) Caggiano of Newport News, Virginia, US; Carol Erkila of Sudbury, ON; David (Laurenn) Pasivirta of Fernie, BC; Tessa (Jonny) Hughes of Vancouver, BC; Sherri (Steve) Schmidt Stutzman of Kingston, ON; Jonathan (Darlene) Schmidt of Lethbridge, AB; Steven Springer of London, ON; and Michael Springer of Montreal, PQ. She was blessed with 22 great-grandchildren. Marjory will be lovingly remembered by nieces and nephews. Marjory chose to acknowledge Jesus Christ as her Lord and Saviour when she was a teenager and faithfully followed Him for the rest of her life. She was well known for her gift of hospitality, mixing up a tray of her hot tea biscuits as soon as anyone came in the door. Her home was open to friends and strangers alike. There was always room for one more at the table. A memorial service was held on Thursday, May 7, 2015 at 7:30 pm at the New Hamburg Christian Centre, 177 Jacob Street, New Hamburg, Ontario, where Pastor Ken Jacob officiated. A celebration of Marjory’s life will be held at a later date in Sudbury. Please email shirley.erkila6@gmail.com for further information. In lieu of flowers, donations may be made to Nithview Community Family Council, the Christian Mission Resource Centre or a charity of one’s choice. Online condolences and donation information is available at www.markjutzifuneralhomes.ca.