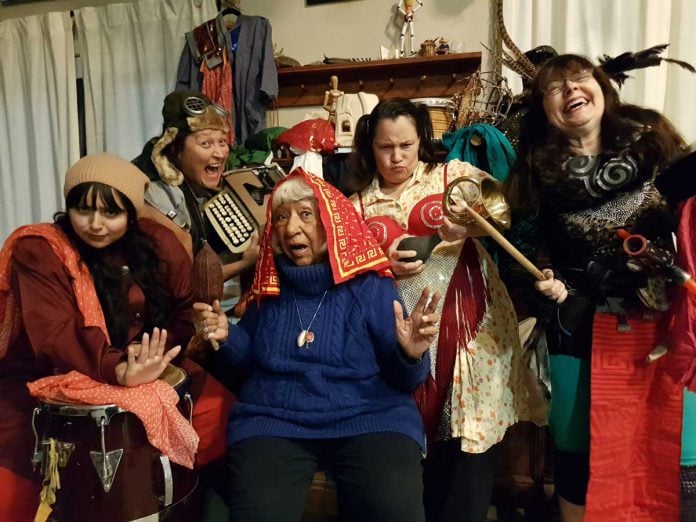 MANITOWANING–On the heels of a successful western Canada and US tour, Material Witness has begun an Ontario tour to from Peterborough to Thunder Bay, including a stop in Manitowaning tonight, Wednesday, May 1, at the Debajehmujig Creation Centre. Material Witness presents their full-length dance theatre work and large-scale textile installation, created in collaboration with over 15 Indigenous communities throughout Canada and the US.

Material Witness knits together the real-life stories of a multigenerational cast of Indigenous actor-writers from the US and Canada, who have lived these statistics, personally. Utilizing Spiderwoman’s signature process of “story-weaving,” each cast member gives voice to her own experience of violence. Their stories range from encounters with everything from stalking, to domestic violence to rape. But far from hitting the audience over the head with tragedy, tales are conveyed subtly, artfully, sometimes even humorously, from a perspective of frank assurance and empowerment. All are woven together through interconnecting layers of language, images, and dance, creating a theatrical collage.

“We are excited to bring the final work and installation back to the indigenous communities we visited last year,” says Co-Artistic Director, Penny Couchie. “Material Witness has been a monumental international Indigenous collaboration for us.”

Material Witness is a project of cultural reclamation, healing and transformation.

In 2010 Spiderwoman Theatre approached Aanmitaagzi to venture on this historic collaboration. After four years of development Material Witness premiered in New York City to commemorate Spiderwoman Theatre’s 40th anniversary. The play development, community workshops and performances are supported by cultural knowledge keepers, traditional healers and counsellors to ensure a safe experience for the artists, communities and audience.

Aanmitaagzi has produced the last two tours of this tremendous project which travels with 10 artists and four production personnel.

“We are determined to uphold our voices, dreams and stories on our own terms,” Ms. Couchie adds. “As Indigenous women, our safety, well-being and vitality is central to our sovereignty.”

“Through this process of talking, talking, talking—and listening—we release a whirlwind of stories into the universe,” explains Spiderwoman artistic director Muriel Miguel. “We break the silence and shame that too often follow these incidents, letting women know they are not alone.” The intent, she says, “is to heal as well as inform, by shining a bright light on this problem.”

The piece, which will run May 12–29, is created in partnership with Aanmitaagzi, a multidisciplinary artist-run company from Nipissing First Nation, some of whose members perform in Material Witness. Miguel, who was just awarded a John Simon Guggenheim Foundation Fellowship, is also the New York production’s director and has a twenty-year history of collaboration with award winning artists Penny Couchie and Sid Bobb, co-artistic directors of Aanmitaagzi.

New York City’s Spiderwoman Theater is the longest running Native American women’s theater company in the US and perhaps the world. Founded in 1976, they provide unique theater production, training and education, which address critical cultural, social, and political issues of concern to the Indigenous, Two Spirit, and women’s communities. Their work bridges traditional expression and contemporary performance practice.

Aanmitaagzi has emerged as a recognized leader in both community-engaged and indigenous arts. Aanmitaagzi has grown from the convergence of the personal and professional histories of its founding members, with the initiating vision of its co-artistic directors, Penny Couchie and Sid Bobb. We carry forward the legacy of intergenerational art-making which engages professional artists and community. Our art-making is a powerful tool in celebrating, sharing

and transforming our individual and collective identity.

Material Witness has been lauded as transformational and healing by communities, knowledge keepers and audience goers. Aanmitaagzi and Spiderwoman theatre are thankful to the many Indigenous communities for engaging in this important dialogue.

Material Witness can be seen this Wednesday, May 1 at the Debajehmujig Creation Centre in Manitowaning at 7 pm.