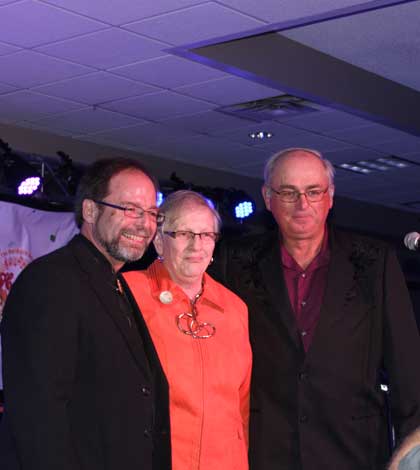 SAULT STE MARIE—Music is ingrained in the soul of Maurice Labelle, a familiar figure to Island music lovers, who is often to be found tickling the ivories for the likes of the popular local old time music group Down Yonder. But Mr. Labelle is just as likely to be found jamming in the garage out back, or filling in for an under the weather bassist in any one of a dozen other local groups, or entertaining the folks at Island nursing homes, church suppers and dances.

“I was thrilled,” said Mr. Labelle of his reaction to hearing the news that he was to be inducted into the Great Northern Opry at the recent ceremony in Sault Ste. Marie. Mr. Labelle’s gentle and generous spirit comes through in the soft tone of his voice. “I first heard about it in the spring I guess, it was a great honour.”

Mr. Labelle has been clambering aboard the music bus that travels to the award ceremonies at the Comfort Inn in Sault Ste. Marie each year for the past five or six years. It is an event he has come to look forward to each fall and Friday, November 1 continued that tradition.

“We had a couple of microphones and some amplifiers in the back of the bus, I had a small keyboard set up in the back, Ben Lentir and Glen (McDougall) were playing their guitars and Doug Hore was on the violin. Debbie Robinson was singing on one of the mics and the other mic we just passed around,” said Mr. Labelle. “We just played all the way to the Sault and all the way back again.”

For the 34 people travelling on the music bus, the trip was an occasion to remember.

Mr. Labelle accepted his award onstage during the ceremonies, after which, like the inductees before him, he was expected to play a song.

“They give you a ring with a guitar on it,” said Mr. Labelle. “Inside it has your name and number inscribed. I am inductee number 87,” he laughed. “There have been 91 gone into the Great Northern Opry up to now.”

Mr. Labelle said that he was pleased to be able to play with the Great Northern Opry’s house band. “The band is Mike Case and the Stallions,” he said. “On the Saturday at noon, I went to the rehearsal and practiced with them. That is how we got ready, then I could sit back and relax.”

The event had several bonuses for Mr. Labelle this year. “One of the inductees, Estelle Deschene, is from Cochrane, my hometown,” he said. “There were quite a number of aunts and uncles who came down for the show from Cochrane and Kapuskasing.

For Mr. Labelle, who took his first music lessons with the nuns of the Sisters of the Assumption in Cochrane and who started his first band in Grade 6 and later performed across the Highway 11 corridor in the appropriately named three piece band Claybelt and the band Ebony, the event is often an opportunity to reconnect with some old friends.

“There are so many great bands in Northern Ontario that we don’t often get to see on Manitoulin,” he said. “There was Dan Reid from the Reid family in Sudbury, there is always a few people that you get to see.”

Mr. Labelle had high praise for those who make the Great Northern Opry happen each year. “There is some great support here on the Island,” he said. “People like Glen and Bev McDougall here on Manitoulin do tremendous work, but there are people in all the little communities and towns across Northern Ontario who organize things in their areas too.

A sad note to this year’s awards was the recent passing of Carol Patterson, the wife of the Great Northern Opry co-founder Dave Patterson. “It was very emotional for him during the speeches,” said Mr. Labelle. “It was tough on him.” But despite the personal tragedy, Mr. Labelle noted that the event went off perfectly. “There wasn’t a hitch,” he said.

Music is one of the great bonding elements in Mr. Labelle’s life. “I have met so many great people on Manitoulin through music,” he said “There is a bond that is created between people when they play music together that is very special.”

If there was any concern that all this newfound notoriety would go to Mr. Labelle’s head, it is quickly dispelled by what the recent inductee was excited to relay at the end of the interview.

Following the awards, Mr. Labelle and his wife took a short vacation. Where might you ask? Nashville, of course. “Nashville is such an amazing music town,” he said. “You have to go. Of course there is country music, but there is also all different kinds of music here too.”

Mr. Labelle relayed how he and his wife spent several hours in a line-up to enter the Bluebird Cafe. “Peter Nelson (of Mindemoya) told me about the cafe,” he said. “It is a songwriter’s cafe, people who write go up and they each play a few songs and hope that one of country singers will choose to record their song.” The lines were long and the disappointed couple didn’t make it into the 5 o’clock show. “But just as we were leaving a fellow said there was an 8 o’clock show. So we just changed lines.”

What followed was a long but serendipitous wait. The Labelles struck up conversations with their fellow music lovers in line and the time flew by quickly and they found themselves a few feet from the performers onstage. “There were about eight artists who did about three songs each,” he said. But the last act wasn’t there to gain attention, said Mr. Labelle. “It was Don Schlitz.” That name might not be familiar to most, but if one were to say Kenny Rogers and ‘The Gambler,’ or Randy Travis and ‘For Ever and Ever Amen’ you may get an inkling of the excitement felt by a musician who recognized the original author of those mega-hits.

“I was 12 feet away from him. He played about 12 songs,” enthused Mr. Labelle. “We got our CD autographed by him and had our picture taken with him.”

Musicians, what are you going to do? 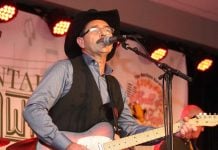 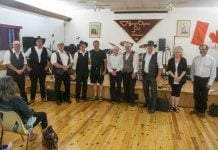 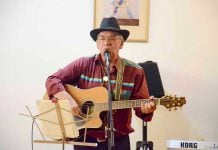