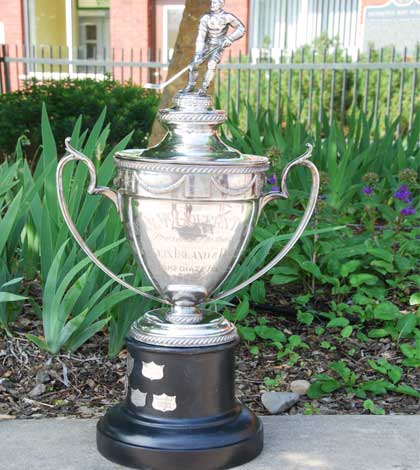 The trophy the Island Senior All-Stars finally won and kept

LITTLE CURRENT—After a few years’ hiatus from its proper pride of place in the trophy case at the Northeast Town recreation centre, the McGovern Cup is back on display in all its hockey glory.

The McGovern Cup dates to the 1930s, created by the late William McGovern, proprietor at the time of the Mansion House, now the Anchor Inn. Mr. McGovern was a known lover of all things hockey (and baseball)—a player in senior hockey circles himself, who went by the nickname of ‘Bedaw,’ a nickname he came by because he apparently punctuated his conversations with this unusual vocal mannerism. Mr. McGovern also acted as the manager of the Manitoulin team that played for North Shore supremacy, and eventually created the McGovern Cup—a great big silver trophy with a hockey player adornment atop to encourage the Manitoulin boys to win. The story goes that not once in over 20 years did Manitoulin win against the North Shore championship team, that is until 1963.

Don Cooper, whose late wife Karlene was a relative of Mr. McGovern’s, eventually became the ‘keeper of the cup’ following Mr. McGovern’s death. Mr. McGovern passed away in 1942. Mr. Cooper was an avid hockey player too, and also managed the senior hockey Manitoulin All-Star team—the very one that finally saw the Island’s hockey dreams realized in the form of capturing the cup over 20 years after Mr. McGovern’s death.

After seeing the McGovern Cup fall into a state of unpolished disrepair in the rec centre display case in the early 2000s—its proud little silver-plated hockey player’s stick bent out of shape—Mr. Cooper rescued the cup from the arena, had it professionally polished and whipped back into shape. That’s when he contacted The Expositor.

Mr. Cooper said he was reluctant to have this piece of Manitoulin Island history back at the arena, for fear of its worth to the memory of Manitoulin’s senior hockey collective going unnoticed, but this reporter called for a sit down with Northeast Town CAO Dave Williamson and Mr. Cooper, with Mr. Cooper filling Mr. Williamson in on the details, and its importance to hockey history.

After striking a deal that a special trophy case would be installed to showcase the cup and a promise that the McGovern Cup would be kept in excellent shape, Mr. Cooper relinquished the cup into the municipality’s care, where it can be admired today in the arena lobby, along with the winning team photo, many of the players in it no longer with us.

In 1963, it seems Manitoulin’s All-Star team had had enough of losing to its North Shore rivals.

So why is the McGovern Cup installed instead of being used, one might ask? Following the win, Mr. McGovern’s daughter, who was living in Toronto, found out about the monumental event and asked that the trophy be retired from service forever. In fact, the town, led by town councillor Al Little, passed a motion, formally retiring the McGovern Cup from service so that the All-Stars’ win would always remain.

Not long ago, Moose FM announcer Bobby Alexander approached Mr. Cooper to reinstate the rivalry, but Mr. Cooper said no. This, he said, was not the McGovern family’s wish.

An Expositor article from 1963 chronicles one of the series’ wins.

“The Manitoulin Island All-Stars travelled to Espanola on Tuesday night and handed the Espanola K-Vees a 12-9 defeat to take a one game lead in the McGovern Cup Series,” the paper states.

“Clifford Aelicks led the Manitoulin team with four goals, three of them coming in the second period when they went ahead 7-6,” the article continues. “Ken Thibault added a pair of goals and singles went to Bev Moggy, Harold Morphet, Wally Harasym, Shelley Thibault, Bill Trimmer and Bob Hawken added singles.”

“The K-Vees moved ahead 3-2 in the first period but from then on the All-Stars took over, outscoring the papertowners 5-3 in each of the last two periods,” the article reads. “Ed Pitawanakwat in the All-Stars net played an outstanding game and several times stopped the K-Vees forwards from close in. With the Manitoulin team back in the McGovern Cup race things may be making a move for a North Shore Intermediate League next year.”

“We never lost a game,” Bev Moggy told The Expositor proudly of that 1963 series.

“We had three defensemen, George and Clive Collins and myself, and George would stay out (on the ice) for the whole game,” he said.

Mr. Moggy said the goaltender was Keith McGaughey, who was actually blind in one eye. In the final game against Espanola, and in enemy territory, he was hurt. “So Harold (Morphet) got dressed and went out in net—he gave the direction to level the players as they came at him,” he recalled.

Mr. Moggy said that the first game (in Espanola) was actually an exhibition game, to see if there was interest, which there was. In that first game, George Collins got in a fight with an Espanola player, he explained, resulting in a massive gash over his eye. Mr. Moggy tried to intervene, and ended up getting kicked out of the rest of the game. The All-Stars trounced Espanola, and moved on to championship play against Elliot Lake.

“The only thing I remember is that I was a hero!” laughed Harold Morphet.

“They were a damn bunch of mean guys—the dirtiest team we ever played,” he added, noting that this time of his life was a bit of a blur, with so much hockey with all the same guys.

The late Bill Trimmer of Manitowaning also played on this championship team, but he too had failing memories of that particular time—he also lived a life full of hockey. Mr. Trimmer told The Expositor that he remembered having to borrow his neighbour’s, Vicky Moggy’s, car to get to the game.

Jim McGregor of Birch Island, however, remembers the time quite well.

He recalled the McGovern Cup as a young boy, having cousins who played on the losing Manitoulin team, and the excitement this particular tournament brought so he was more than pleased at being the All-Star team’s captain in 1963.

“When I was growing up, the McGovern Cup was all we heard about, then all of a sudden there I was, playing on the ice for it,” he smiled.

The final game against Elliot Lake was held in that community. At that time Mr. McGregor was working for Ontario Hydro, he explained. The morning of the big game, he awoke feeling sick.

“My wife wanted to cook me breakfast, but I had to refuse it,” he said in testament to his feeling under-the-weather.

“I was sick all day and when I got home, I walked into my parents’ house, where we lived at the time, and I went to lie down when there was a knock at the door, then three cars pulled in,” he said.

“Where’s Jim?” he remembers them calling, followed by the sound of boots, Harold Morphet’s and Bill Trimmer’s among them, on the stairs.

Sick with the flu, Mr. McGregor got dressed, grabbed his equipment and headed for the back seat of one of the cars where he laid down all the way to Elliot Lake.

“This was the last game, the one we had to win,” Mr. McGregor said. “Once I was dressed and was on the ice that was it—no more pain.”

He said the game itself is a little hazy, guessing that he scored at least one goal, but he remembered that he played right wing, with Mr. Morphet as centre.

The Manitoulin fans were there in force too. “When we scored a goal, there was a lot of noise,” he said.

“It was good hockey back in those days, and it kind of brought the community together,” Mr. McGregor shared. “I remember the days when Birch Island had its own team and I would go and watch as a boy.” The laughs and jokes shared by the young men on the team really helped to mould the group together, he shared, and if you didn’t score a goal on your shift, you’d sure hear about it, he chuckled.

The All-Stars were treated as returning heroes following their big win, with a banquet held in their honour at the Little Current Legion.

Espanola challenged the All-Stars the following year, but Manitoulin told them they lost the trophy, Mr. Moggy laughed.

Mr. McGregor said he is happy the trophy has a permanent home again.

Next time you’re in the Little Current arena, consider paying a visit to the McGovern Cup trophy case and taking a glimpse at hockey history.