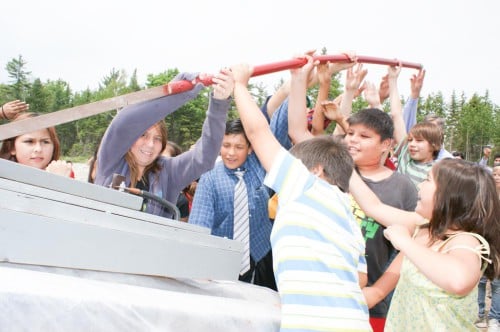 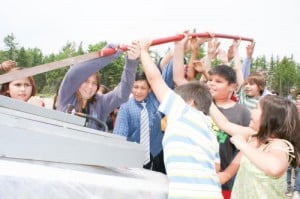 The special day, Friday, June 15, began at 5:30 am with a sunrise ceremony beneath the eastern turbine and ended more than 12 hours later with a speech by the newest member of the M’Chigeeng community, David Suzuki.

The world-renowned environmentalist was on hand for the special moment, having been contacted by the band months before through a letter.

“When I received the letter asking me if I would come, the answer was ‘yes’,” he said. “Right away, ‘yes’.”

Mr. Suzuki praised the M’Chigeeng people for finding a way to respect the environment and their culture while providing for their community and their future.

“I have breathed your air, drunk your water, eaten your food,” Mr. Suzuki told a crowd of nearly 600 people who packed the floor of the M’Chigeeng arena. “Wherever I go, I will take a part of you with me.”

Though Mr. Suzuki has a doctorate in zoology and taught genetics at the University of British Columbia, he said it was the First Nations people who taught him how to look at the world.

“I was involved in environmentalism,” he explained. “I was in Haida Gwaii, which was then called the Queen Charlotte Islands. I was doing a documentary on logging there, and I spoke to a youth, who said something that stuck with me. I asked him why he objected to the logging, when the logging brought jobs to his people.”

“He said, ‘We will stop being us’,” Mr. Suzuki recalled. He said he thought about the matter and it occurred to him that the Haida Gwaii did not see themselves as ‘apart’ from nature, but as ‘a part’ of nature. That revelation changed how he looked at nature himself, he explained.

He noted that people needed to stop thinking with a ‘homocentric’ view—basically, the sort of thinking that proclaims the homo sapien the centre of the universe.

“We are all a part of nature,” he said. “As we take up more and more of what exists in nature, other parts collapse as there’s no more room.”

He said that it was too late to worry about issues like global warming, as the ‘tipping point’ has already been reached. Instead, people should focus on how to decrease their footprint as much as possible.

“I believe solar energy is the best solution,” he told the crowd. “There’s water energy and tidal energy and wind energy. Of them all, wind is the best developed.”

Earlier in the day, Mr. Suzuki was waiting with other dignitaries on top of the east bluff in M’Chigeeng as roughly 300 people gathered, ferried by buses, vans, personal vehicles and a helicopter. The convoy of guests passed an anti-turbine protest on the corner of Highway 540 and Highway 551, who peacefully protested with signs, flags and drumming.

“They’re not from our community,” Chief Hare said. “There are always people who aren’t happy with decisions we make, but the people here are behind this.”

Though the construction of the turbines created hundreds of jobs, now that the project is complete, the jobs have dwindled down.

“The companies we hired were great, hiring local people to build the road and do the work,” Chief Hare noted. “But this isn’t about jobs. It’s about the money, and having money for our community.”

The other turbine, operating at about half capacity during the event, raised the community roughly $60, he noted. With both spinning at capacity, the community can expect to bring in several hundred dollars an hour, though the community now also has to pay off the loans it took to raise the turbines.

After speeches from Chief Hare, community elder Alma-Jean Migwans, and special guest Ontario Energy Minister Chris Bentley, students from Lakeview School drummed and sang an honour song. The students, which were from Kindergarten to Grade 3, were dressed in traditional red and white outfits. As they drummed, many of the assembled guests began to sing along.

Following the singing and drumming, the children, chief, minister and Mr. Suzuki gathered at the ceremonial switch and on a count of three, pulled it down to close the connection. Hundreds of feet overhead, the blades of the turbine began to slowly turn as people cheered.

People were invited to climb the curling stairs and enter the base of the tower to get a look at the interior as well, but with the ceremony complete, the buses and vans quickly filled as people departed to the arena.

The arena floor, beautifully decorated with round tables and braids of sweetgrass, quickly filled as nearly 600 people crowded in for the feast, speeches, ceremonies and the keynote address from Mr. Suzuki.

“This whole day has been such a success,” Greg Padulo from Generation Seven Consulting told The Expositor. “This is not just about the two turbines on the hill—it’s about a community coming together, working together and succeeding together.”

The consultant, who worked with M’Chigeeng and Mother Earth Renewable Energy (MERE), the band-owned company that operates the turbines, for the final two years of the project, said he understood there were those on the Island and those in the community who still objected to turbines.

“With any energy source there will be some sort of negative,” he admitted. “Coal plants pollute the air, nuclear has waste, and energy panels are expensive to make.” He said that literature showing ‘piles of dead birds’ under turbines doesn’t actually happen, at least not any longer.

“The Green Energy Act really protects communities from poorly planned and placed wind turbines,” Mr. Padulo said. “It has more thorough, strict guidelines on where turbines can and cannot be placed. You won’t see them in a migration path, for example.”

Before the act, the environmental assessment required wasn’t as stringent as it is now, he said.

“There are turbines up in places where, under today’s assessments, they wouldn’t be allowed,” he said.

“The downsides to turbines are so small,” he said. “When I see people protesting turbines, I want to ask them, ‘What do you propose as an alternative’?”

After speeches, MERE announced that there would be a special, unplanned announcement that wasn’t on the itinerary. As people murmured in surprise, Chief Joe Hare returned to the stage and microphone and announced that the M’Chigeeng council had decided, in recognition of his dedication and work for the environment, to make Mr. Suzuki a member of the M’Chigeeng people, something that had only happened once or twice in the community’s history.

“You can’t run for chief, though,” Chief Hare joked.

Council member Victor Migwans, community youth Pierre Debassige, Mr. Suzuki and Chief Hare took part in a smudging ceremony on stage, before Pierre walked around the arena, purifying and cleansing the people and food. Mr. Suzuki was presented with an eagle feather, a sign of honour to the First Nations people.

“It’s a symbol of honour and achievement,” Carol Tolouse, wife of Angus Tolouse, the Assembly of First Nations Ontario regional chief, explained. “The eagle holds a place in our culture. The eagle carries our prayers and tobacco to the Creator and is the link between land and sky.”

Mr. Suzuki was presented with a framed copy of the band council proclamation naming him a member of M’Chigeeng as well as gifts and the eagle feather to a round of ardent applause.

“I am overwhelmed and humbled by the honour you give me today,” he said.

Energy Minister Bentley, who couldn’t remain for the dinner, said that he was proud of M’Chigeeng’s initiative and drive.

“Look at them,” he said to The Expositor. “The council has involved all the people of the community in this. It creates jobs and sustains the community. They are the first wholly First Nations’ owned wind farm.”

It was praise that was echoed by Mr. Suzuki.

“I wouldn’t be surprised if other communities don’t come to you, look to you, as an example of what can be done,” he said. “Congratulations.” M’Chigeeng!”