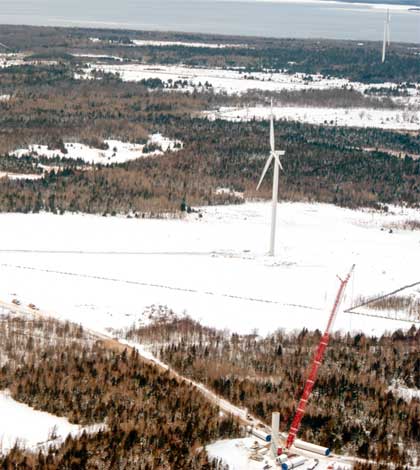 LITTLE CURRENT—Twenty-two of the 24 wind turbines that will make up the new McLean’s Mountain Wind Farm (MMWF) are now erected with the project moving ahead on schedule.

“The 100 metre-high meteorological tower is now constructed and the submarine cable (in the North Channel) was successfully tested,” explained Sarah Charuk, director of communications for Northland Power Inc., on Monday. “As well, the switching station is currently being commissioned and is scheduled to be energized in early January 2014.”

Ms. Charuk concluded her update to The Expositor by noting that site construction activities will be suspended during the holiday season from Saturday, December 21 to Sunday, December 29.

“Work will resume on Monday, December 30, with another break on Wednesday, January 1, 2014 for the New Year holiday,” said Ms. Charuk. “Onsite security will be active throughout the holidays.”

The 24-turbine MMWF is being built by McLean’s Mountain Wind Limited Partnership (a joint project between Mnidoo Mnising Power General Partnership Inc. and Northland Power Inc.) and is scheduled to be commercially operational by the end of the first quarter of 2014.