TEHKUMMAH—Last week, the McNaughton family of Tehkummah received word that they had been named one of 2018’s BMO Ontario Farm Families.

John McNaughton said his family had been nominated last year but didn’t win, so he, wife Christine and daughter Robyn Ashley were surprised and pleased that someone had once again thrown their name in the ring—and to be chosen for the honour.

“BMO and the Ontario Plowmen’s Association do this during the International Plowing Match,” Mr. McNaughton explained. “They recognize 10 farm families in Ontario for their contribution to the farm community.”

As part of the experience, the McNaughtons will join the other nine families for a welcome reception at this year’s International Plowing Match in Chatham-Kent, followed by a special ceremony, lunch and family photos.

Mr. McNaughton said he’s pleased the family will get to go to the annual plowing match, being held this year in Pain Court, as it also gives him a chance to check out all the latest in farm equipment.

Before the family was named as an Ontario Farm Family, they had to go through a rigorous interviewing process. “It was like giving a full resume,” Mr. McNaughton laughed.

“We are very pleased and honoured,” he added. “There’s a lot of outstanding farm families out there that don’t get the recognition. We’re very humbled to have been chosen.”

The International Plowing Match takes place from September 18-20 near Pain Court in Chatham-Kent. 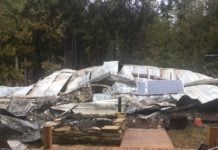