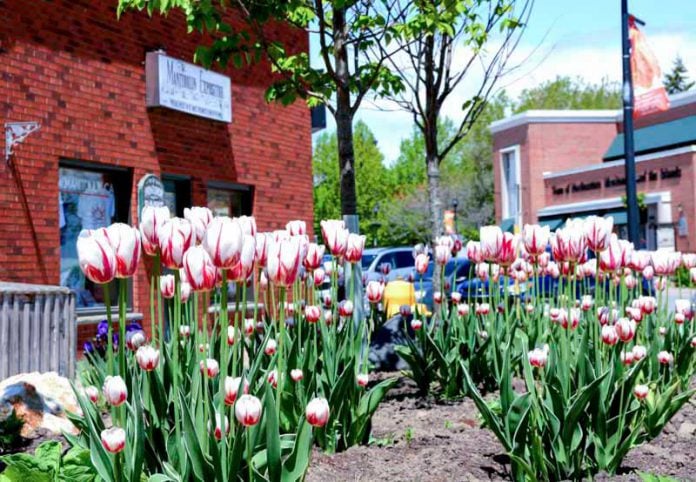 Marilyn Harasym has been a part of The Expositor team since September 2005 and while she now fills the roles of accounts receivable and circulation manager, her first taste of this newspaper came while she was still a Grade 12 student at Manitoulin Secondary School, doing her co-op placement with The Expositor. It was while on assignment, covering the then Manitowaning horse races, that she met her husband-to-be Jim Harasym. The couple have three grown children and two grandchildren.

Marilyn has two college diplomas from Cambrian—for personal support worker and secretarial—and she’s a keen volunteer in the community. Marilyn’s smiling face can often be seen volunteering at events for minor hockey, the Little Current Lions Club, Skate Canada Manitoulin and for her church, Grace Bible.

The Expositor’s answer to the Renaissance Man, Michael Erskine’s CV has been said to rival ‘War and Peace,’ at least in length and variety. His work history following high school began as a jackleg driller at the 2,400 level of Frood Mine. Michael went on to work on the railroad, as a commercial gasfitter, then on to a jackknife double oil rig in Alberta before returning to university to secure his honours BA in political science. An early techno nerd, Michael moved into the world of high technology at the start of the PC revolution. Eventually finding his calling as a multiple award-winning wordsmith, Michael’s life experience informs his writing.

Manitoulin Expositor advertising sales manager Robin Burridge first started at the paper eight years ago in the editorial department after moving to Manitoulin Island from southern Ontario. Earlier this year Robin received the 2018 Best News Story award from the Ontario Community Newspaper Association for her article of a woman, moved by the #metoo movement, who shared her story of childhood sexual abuse years later.

In 2018 Robin decided to take on a new role and switched from reporting to sales.

In her spare time Robin runs a small business, Anchored Jewelry, selling her handmade pieces at Island shops and on Etsy.

This fall Robin will be marrying her long-time partner Erik Anderson surrounded by friends and family in Kagawong.

Dave Patterson is the production manager of The Manitoulin Expositor and is in his 10th year at this paper. Along with production duties, Dave is responsible for Manitoulin.ca, fishmanitoulin.com, manitoulinmall.com and our new flagship tourism website exploremanitoulin.com. Dave’s websites have garnered both provincial and national awards including six first-place finishes.

Readers who are keen on fishing might recognize Dave from his work with the Manitoulin Expositor Salmon Classic. Dave started this premiere tourism event four years ago as a way to boost tourism on Manitoulin and it seems to be a roaring success, bringing millions of tourist dollars to the local economy.

In his down-time, Dave enjoys fishing and alongside Aaron Case they form the Ontario Fishing Guys. You can follow their exploits on social media and maybe even pick up a tip or two.

Kendra Edwards is the in-house graphic designer in our production department. The daughter of Kagawong’s Edwards Art Studios duo Barbara and Richard Edwards, Kendra attributes her artistic eye to her parents who fostered her creativity from a young age.

After studying communications at the University of Ottawa, she returned home to Manitoulin and started her own freelance design business in 2015, Kendra Edward Designs, and joined the Expositor family in 2017. Here she works with local businesses and entrepreneurs to develop and promote their brand. When she isn’t in front of a computer screen, she’s fishing with her boyfriend Cody Leeson, enjoying his culinary creations or hanging out on the couch with her furry companion, Frank the cat.

Kate Thompson works as a part-time proofreader at The Expositor.

A published author and retired teacher, she helped establish the Manitoulin Island Creative Gatherings—monthly get-togethers for people who enjoy living creatively. Kate enjoys working in “the back room,” just like she did back in the ‘70s when she worked at The Expositor doing layout and proofreading. “In those days Rick had a fold-out chair for us to use if we got a few minutes to rest, because we worked through most of the night getting the paper ready to go to the printer. I did a brief stint as a reporter, too, but was too shy to go up front to take pictures.”

Warren Schlote has been writing for The Expositor since July 2018. He moved to Little Current from Mississauga after graduating from the University of Guelph-Humber. Warren enjoys discovering lesser-known or overlooked parts of the world and wishes to make documentaries in the future. He grew up holding a video camera and continues to have a passion for multimedia content. Warren has won a national award for a radio feature he produced for Toronto’s Jazz.FM91 and several awards for a short documentary. Warren has also produced content for the Toronto Jazz Festival, CBC, In The Hills Magazine, Humber College and Emerge Magazine.

Debbie Bailey works at The Expositor office’s front desk and circulation department. She’s the woman in charge of ensuring you get your paper each and every week—either in your mailbox or in the store.

Born and raised in Little Current, Debbie is married to fellow Haweater Darren Bailey and is a mother of two boys. In the summer, Debbie and Darren can be found at auctions across Manitoulin and in downtown Little Current where they operate Big Bite Hot Dogs and Sausages (look for them at the Trade Fair this weekend too!).

Debbie has a diploma from Cambrian College in social services, and also works part-time for the Victorian Order of Nurses (VON).

When she’s not working at her various jobs, Debbie enjoys gardening and spending time with her family.

Alicia McCutcheon is the publisher and editor of The Manitoulin Expositor, a role that comes naturally to her as the daughter of Rick and Julia McCutcheon, this newspaper’s publishers since the early 1970s.

Alicia has had many jobs at The Expositor over the years, from stuffing envelopes as a child, running the circulation desk, creating ads in the production department to starting her time in the editorial department as a cub reporter not long after graduating from Laurentian University.

Alicia has been a member of the Little Current Lions Club for over 10 years and is vice president of the Ontario Community Newspaper Association (OCNA), championing for independent community newspapers across the province. Alicia has won OCNA Better Newspapers Competition awards for her articles.

Alicia and her partner Aaron Case reside in Sheguiandah.