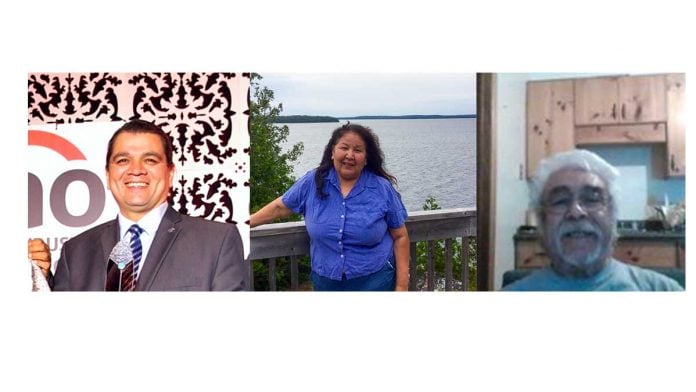 WIIKWEMKOONG – Wiikwemkoong ogimaa candidate Duke Peltier is running for his fifth term as the head of the territory, promising to continue the work he has advanced in his previous four terms as ogimaa by offering “experienced leadership” to Wiikwemkoong citizens when they go to the polls next month.

“There’s been a lot of progress done within the community. A lot of the development and projects have started and are either coming to completion or well under construction,” said Mr. Peltier, one of three ogimaa candidates in the August 15 election.

Despite the list of completed projects, Mr. Peltier said he remains focused on the many things yet to come for the future of Wiikwemkoong and projects not yet begun.

“There are a few other major areas that we’d like to see through and make sure that we follow through with, such as making sure that we get the approval to build a new school as well as ensuring that we can redevelop our nursing home. Those are just two of the large items among other ones, like completing our islands claim negotiation process,” he said.

A major process that is currently underway is the redevelopment of the community’s governance structure. That project began in 2013 when it established its constitution.

“There’s a lot of laws currently under development in different stages and we want to ensure we bring the community along and do the proper consultation so the laws are acceptable to them,” he said.

Away from direct governance, Mr. Peltier said it was important to continue revitalizing the Anishinaabemowin language and strengthening traditional cultural practices.

Mr. Peltier was a councillor for three terms before becoming ogimaa in 2012. He has served in a host of leadership roles beyond Wiikwemkoong, including a current posting as the children’s commissioner for the Anishinabek Nation.

The incumbent ogimaa is a spokesperson who has represented beneficiaries of the Robinson-Huron Treaty during the ongoing annuities lawsuit, serves as a board member of Indian Resource Council and as an advisory member of both Northern Policy Institute and Right to Play. He has collaborated with the Assembly of First Nations and Chiefs of Ontario on initiatives that are relevant to both Wiikwemkoong citizens and Indigenous people across Canada, such as aiding in the creation of studies and reports as well as speaking at gatherings and working on initiatives with federal officials.

Sitting in a leadership role during the COVID-19 era has been a powerful learning opportunity, said Mr. Peltier.

“Managing a pandemic was something that nobody had much experience in. Now our leadership, our council and administration have a lot of knowledge and know what needs to be done, what works and what adjustments need to be made should any pandemic appear again,” he said.

Mr. Peltier said his record on accomplishing important tasks for his community is a significant reason why constituents should consider casting a vote for him.

“I’m willing to do the work as necessary and I’ve proven that I can do that work,” he said.

WIIKWEMKOONG – Rose Shawanda is again throwing her hat in the ring for ogimaa of Wiikwemkoong Unceded Territory when it goes to the polls next month, August 15.

Ms. Shawanda was born and raised in Wiikwemkoong and is fluent in the language.

“I received my formal education in political science in Thunder Bay and recreational leadership and management in North Bay,” Ms. Shawanda shared her background in education with The Expositor.

Ms. Shawanda is also a registered practical nurse who has worked in health services with a focus on youth and elders for more than 20 years. “I have a clear understanding of our health care needs and will work diligently to ensure they are met in ways that are acceptable to our families and community.”

“My early education started with my family and my community,” Ms. Shawanda continued. “It was the knowledge of the Seven Grandfather teachings and a foundation in Anishinaabe language that supported me while I completed post-secondary education and training.”

Ms. Shawanda said she is familiar with her community’s governance issues and is “prepared to move forward with transparency, integrity and inclusivity for the benefit of our people in the areas of policy review, water, sewer and infrastructure, roads, food and sovereignty, recreation, language, the islands claim and economic development.” Ms. Shawanda’s focus is the ‘three Ls:’ land, leadership and labour.

Ms. Shawanda would like to see policies reviewed, updated and revised to accurately serve the needs of the community as well as see a review of all six of the satellite community’s infrastructures. If elected, Ms. Shawanda would implement consistent and accessible testing for local wells and explore the feasibility of modernizing water treatment for safe clean drinkable water for all community members.

Ms. Shawanda would also like to see the roads assessed with upgrades as needed, particularly in rural areas.

When it comes to food sovereignty, Ms. Shawanda hopes to ensure her community has the means to produce safe, healthy food “whether we grow produce or raise livestock.”

“Recreation is an important aspect in everyone’s life and throughout,” Ms. Shawanda continued. “Social gatherings and exchanges, sharing and helping to raise each other up was our way of life. I envision a recreational facility that will accommodate all ages of the community and encourage intergenerational strengthening of relationships.”

“I was raised to be fluent in our language and I know the value and importance of this as a resource for our youth that will ensure their thinking, their life skills and their aspirations will support long term sustainability for the community as a whole,” the candidate added. “I have already made the connection between the elders and the youth through my work in various programs to create an environment of knowledge and unity.”

On the topic of the islands claim, Ms. Shawanda said she and council would base decisions on land claims and island claims, “to the best interests and benefit of the people now and in the future.”

If elected, Ms. Shawanda said she would encourage further steps towards sovereignty and economic sustainability by encouraging band members to explore new economic models, opportunities and alliances that are consistent with local sustainability and local control.

“With all the things happening in the world right now, it’s becoming pretty obvious that we need to work together more. Our sovereignty is at stake.”

The Wiikwemkong election will take place on Saturday, August 15.

WIIKWEMKOONG—Terry Spanish, whose traditional last name is Otasquaiob, has a lengthy to-do list ready should the community choose to elect him as Wiikwemkoong ogimaa. “There are quite a few things that need to be done,” he said when contacted about his campaign platform by The Expositor last week.

“Jobs,” he said, are one of his top priorities, “not just for the select few.”

Mr. Otasquaiob said that he will take the battle against drug addiction to the source and seek solutions to the scourge of drug addiction that is hitting so many communities. “I will be looking into the system of addiction and how they are being addressed locally.”

Cutting off the sources that are coming from outside of the community will be a priority. “Seems that people are coming into the community and turning into mules and bringing those problems into Wiikwemkoong,” he said. “Drugs are pervasive all over the place.”

Mr. Otasquaiob said he feels his prior work in the addictions field will prove to be a strong asset in those endeavours.

Mr. Otasquaiob began working in the community services field while living in Toronto, including as a housing manager. “I worked a lot in the social services, especially helping individuals,” he said. He returned to the Wiikwemkoong community in 2013 after working for several years teaching Anishinaabemowin in Michigan. “I taught at Harbour Springs High School for six or seven years and in Little Traverse Bay Indian Reserve,” he said, noting that all of his teaching centred on a land-based approach. “A lot of our language comes from the ecosystem,” he said. “Language is very effective in knowing about the land.”

He cited his family connections and wishing to be closer to his home community as the main reasons that he returned to Wiikwemkoong. “I wanted to hear the language again the way it was meant to be heard,” he said. “Not as an add-on or curiosity, but as a living spoken language. Wiikwemkoong is the epicentre of Anishinaabemowin.”

“I am pretty happy the way I am right now,” he said, adding that he would like to put his education and skills to work for his community.

“I have a BA from the University of Toronto and a masters in education,” he said. In addition to working in community shelters, he has also worked in an addiction centre in the west end of Toronto. “I want to work with people to improve their physical, mental, emotional and spiritual well-being,” he said, noting that a lot of these things are interwoven and integral to “keeping Wiikwemkoong safe.”

“Reintroduction of recreational and cultural events as part of a revival will take place if I get in as chief,” he said. He noted the foundations set by traditional belief systems and the reintroduction of “the old ways of doing things,” citing going into the bush to collect firewood and harvesting medicines.

He is also concerned about appropriation of land by the band. “The land itself is owned by the people,” he said. “Band council has no business in seizing land from band members. That land is needed by the people.”

“I am fully fluent in Anishinaabe language and English with an understanding of verbal French,” adds Mr. Otasquaiob. “Our Anishinaabemowin language will be taught as first language in the community, after all, we in Wikwemikong are Anishinaabe people. English as second language will also be a primary focus.”