MANITOULIN—Friends of Misery Bay (FOMB) will be receiving funding through the Ministry of Natural Resources (MNR) 2014-2015 Species at Risk Stewardship Fund to investigate the death of 50 of the park’s turtles, including the endangered Blanding’s turtle, that were discovered last spring.

“We (the FOMB) applied for the Species at Risk Stewardship Fund and recently learned that our application was successful,” FOMB board chair John Diebolt told The Expositor on Monday. “We are very happy that we are able to get the funding.”

FOMB vice board chair Gaynor Orford explained that the funding was applied for in conjunction with Laurentian University, which will be conducting the study.

“The study will investigate the cause, timing and extent of an acute turtle mortality at Misery Bay Provincial Park,” further explained MNR senior media relations officer Jolanta Kowalski. “This will be done by continuing Species At Risk turtle surveys both inside the park (mark, recapture and telemetry of living turtles and mortality surveys) and outside the park (ie mortality and living turtle surveys in adjoining and nearby protected areas with similar habitat).”

“Analyses will include presence of disease, habitat suitability and predator/prey dynamics,” continued Ms. Kowalski. “Information will be collected on mortality events observed elsewhere in North America and ideas will be developed for management of the population into the future. The ministry expects to provide funding for this project later this year.”

Ms. Kowalski would not divulge how much FOMB would be receiving in funding, but other sources give the figure of $80,000 in provincial funding, in addition to matched funding from Laurentian University for a graduate student to work on the study.

Last fall, The Expositor reported that a park ecologist with the MNR found 50 dead turtles (10 adult painted turtles and 40 Blanding’s turtles) in April/May at the park while working on radio tracking turtle movements, habitat and behaviour at the park.

The park ecologist contacted Jacqueline Litzguz, a herpetologist (a researcher who studies amphibians and reptiles) with Laurentian University who has been working over the last several months to determine the cause of death of the turtles. The new funding will help Ms. Litzguz continue her research in coordination with the MNR and FOMB.

“We have two ideas of what could have caused the deaths,” Ms. Litzguz told The Expositor in November 2013. “One is a disease—the ranavirus. ‘Rana’ means frog in Latin and it is an emerging infectious disease and one of the global causes for amphibian decline. It can kill groups of turtles quickly which leads us to think it might be the cause. We are trying to figure out ways to test this theory. We have collected tissue samples from turtles in the park, but we need fresh tissue on the dead turtles to use. We have also collected samples from frogs. If the virus is present we should find it in the frogs. We will also be trying to test bone marrow from the dead turtles’ shells, which has never been done before.”

The Laurentian herpetologist also told The Expositor that the other theory is predation.

“It could be a new predator,” said Ms. Litzguz. “If we find teeth marks or scratches on the shell it is hard to determine if it is from a predator eating it pre or postmortem—that’s where Ms. Mendler and forensic investigation will come in. Whatever the cause, it is going to be really hard to determine, but we are going to try our best.”

Ms. Litzguz was unavailable for an interview as of press time on Monday, however The Expositor will be speaking to her later this week with an update on this story in next week’s paper. 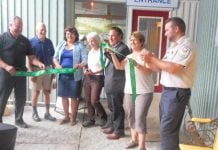