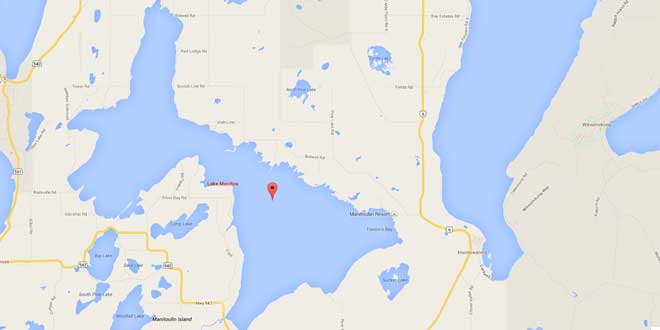 MANITOULIN—Despite objections from Manitoulin municipalities, the Ministry of Natural Resources (MNR) and the Ministry of Municipal Affairs and Housing (MMAH) is holding its position that Lake Manitou will be designated as “at capacity” for development under the new Manitoulin Official Plan (OP).

MNR representatives Wayne Selinger, biologist, and Trevor Griffin attended last week’s Manitoulin Municipal Association meeting, along with Charlsey White of the MMAH, to discuss a number of issues Island municipalities are having with the draft OP, one of the most predominate being the designation of Lake Manitou as at capacity for development due to having a MVWHDO (mean volume weighted hypolimnetic dissolved oxygen) concentration less then 7.0 mg/L and its effect on the lake trout population.

Mr. Selinger began his presentation, justifying the designation of Lake Manitou by addressing the rarity and importance of lake trout.

“Only one percent of the province’s lakes contain lake trout and we are responsible for 25 percent of the world’s lake trout population in general,” explained Mr. Selinger. “Lake trout need cold, clear, well oxygenated lakes and with Lake Manitou being the fourth largest in Northeastern Ontario, it is quite significant.”

He referenced the Provincial Policy Statement as justification to protect the lake trout population and the subsequent closure of Lake Manitou for development.

“Sampling was undertaken by the MOE (Ministry of Environment) over four years (2007-2011) which showed MVWHDO levels below the 7 mg/L provincial criterion for lake trout,” added Mr. Seligner. “All individual profiles obtained over the four years of sampling were below 7 mg/L. The average for the lake’s eastern basin was 6.5 mg/L, while that for the western basin was 2.6 mg/L.”

Mr. Seligner ended his presentation by stressing that best management actions could help improve the lake but that “development controls in the OP need to start now.”

Tehkummah Reeve Gary Brown inquired what the MNR would be doing to help improve the quality of the lake and re-stressed the Island municipalities’ desire to not have the lake designated as at capacity for development as the new OP would be in place for the next 20 years.

“There is no debate, the lake has failed the test,” replied Mr. Seligner. “You still have 150 lots (existing lots of record) that can be developed, but you should address the 800 current cottages, which probably, at least 50 of them, have leaking septic systems.”

Ms. Seligner said the ball was in the court of Island municipalities surrounding Lake Manitou to look at possible solutions for the lake such as shoreline development controls in the OP, best management practices for the development of existing lots such as setback and vegetative buffers, working with area stewardship programs for agriculture lots and developing a possible septic inspection program to address old septic systems.

“No one is challenging the statistics, but we don’t know what the effects are going to be in the long term,” said Billings Mayor Aus Hunt. “Lake Manitou is not a remote lake, it is already built up.”

Mayor Hunt gave the example of McGregor Bay, which reportedly had water problems in the past, but is now “better than before.”

“I would agree with putting a plan in place to improve the water quality,” said Mr. Seligner, “but allowing for another 200 cottage lots in the meantime just doesn’t make sense. We need to close the door, at least for now, while work is done to improve things.”

Prompted by further questions from municipal representatives, Ms. White repeated that building would still be allowed on existing lots of record.

“In the original draft (of the OP) there was no development even on existing lots of record,” Ms. White explained. “In the current draft this has been taken out to allow for development on the existing lots.”

Though it was not discussed at the meeting, this change has given way to the initial development of the McLay Subdivision on Lake Manitou.

Developer Doug McLay told The Expositor on Monday that he had received verbal approval from the MMAH for an initial pilot project for the development of six of his 21 lots, with the septic systems to be monitored for three years, proving that no phosphorous reaches the lake.

“This is why the municipalities are asking for the lake not to be named (at capacity),” said Manitoulin Planning Board secretary/treasurer Elva Carter. “If it does clear up, we don’t want to have to do an amendment (to the OP).”

Lee Hayden, a councillor for Gordon/Barrie Island, inquired if there were any other Island lakes that the MNR was concerned about.

“There are some oxygen issues in Lake Kagawong, but the MNR’s primary concern is for the lake trout in Lake Manitou,” Mr. Seligner responded.

Mike Meeker of Meeker’s Aquaculture was also present at the meeting, and following the MNR’s presentation was asked by the MMA to share his perspective on Lake Manitou.

Mr. Meeker referenced a study done on Sudbury lakes that showed, despite high levels of development on area lakes, there was no increase in phosphorous levels.

“Virtually every lake in Canada shows the same pattern of oxygen levels going up and down over time,” said Mr. Meeker. “You guys are being told that the phosphorus levels mean that development needs to halt on Lake Manitou, but there has only been four years of study. The levels should be measured over the long-term and if you then start to see an increase, then start to do something.”

“Fifteen years ago I heard dire things about (Lake) Wolsey, but the reality is that the phosphorus levels have gone down,” continued Mr. Meeker. “I monitor many of the lakes on Manitoulin and have done so over the past eight years—you didn’t test the water in 2012 (on Lake Manitou), but I did and the phosphorus levels came down.”

“No one disagrees that we want to protect the fish and it makes sense to regulate septic beds, but should it (the phosphorus levels) halt development? No,” said Mr. Meeker. “The only thing you have talked about is lake trout, but we need to protect everything in the lake and some species need lower oxygen levels and the upper levels of the lake are saturated with oxygen.”

Northeast Town Mayor Al MacNevin stated that since the “hammer is now down on development” for Lake Manitou, it was going to have a major impact for Manitoulin.

“The majority of new development should be directed at settlement areas anyway,” Ms. White responded.

“The science just isn’t there to shut down development,” said Mr. Meeker. “If the MOE isn’t going to continue monitoring the lake I can show you how with a jar, rope and a bottle. Fifty years ago it (the oxygen levels) was probably the same and there wouldn’t be any cottages if there was the same criteria.”

“The province is not going to say that Manitou is open for development tonight, that has been made clear,” Ms. White stated. “The lake is being designated as at capacity based on the best available science. As I have said, the current draft permits the development of existing lots of record.”

Throughout the rest of the MAA meeting, discussion continued on other issues with the OP, however it was clear to those present that the province would not be backing down on Lake Manitou’s designation as at capacity for development. 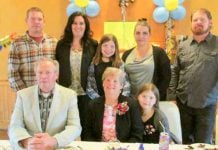 Former planning board head weighs in on Official Plan delay