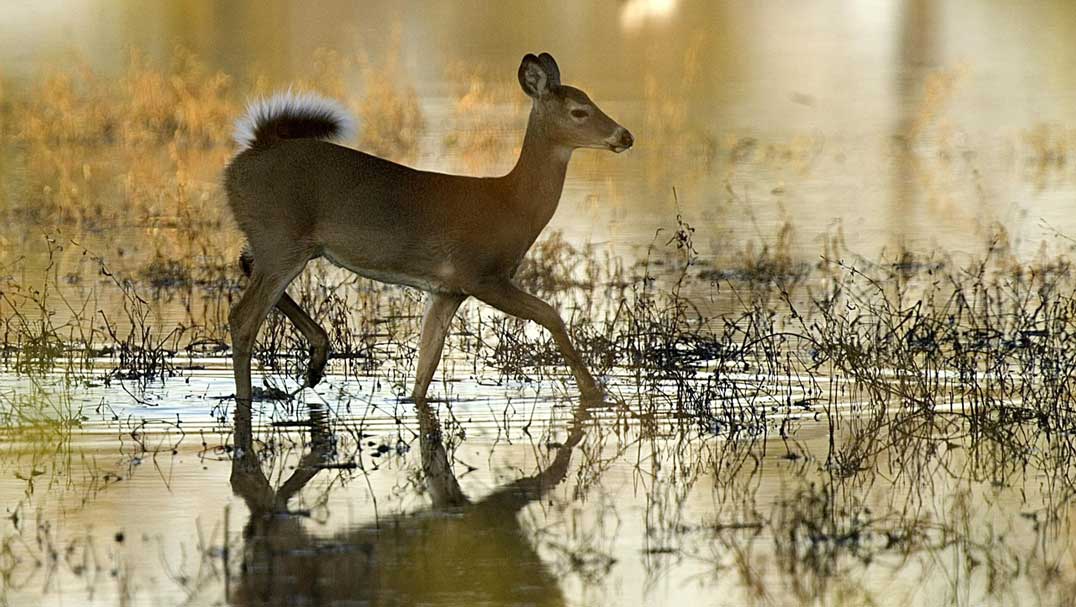 Pending the completion of ministry approval

MANITOULIN—Following a meeting of the Manitoulin Deer Advisory Committee with the Ministry of Natural Resources and Forestry (MNRF), the committee recommend an increase to antlerless deer tags for the 2015 firearm (rifle/bow) hunt for both of Manitoulin’s wildlife management units (WMU), 43A (Robinson and Dawson Townships) and 43B (the remainder of Manitoulin, including Barrie Island).

“Trends in deer numbers are investigated based on a variety of indicators including deer seen per hunt day, hunter success, motor vehicle accident data, deer condition (check station) and nuisance deer complaints,” explained Wayne Selinger, fish and wildlife biologist with the MNRF Sudbury area office, who represented the MNRF at the Manitoulin meeting. “Deer numbers in 43A declined significantly over a 15 to 20 year period through to 2010 (habitat related – less logging and agriculture on the West End of the Island). In response to tag reductions and mild winters, we have seen some modest herd growth between 2010 and 2014. Current density is still considered to be moderate and our management objective is to continue to increase the population over the next few years. Given a relatively mild winter this past year we anticipate a good fawn crop.”

[quote_right]“Population density in WMU 43B decreased significantly between 2003 and 2010 in response to harvest, a severe winter in 2009, and ongoing predator impacts,”[/quote_right]

“Population density in WMU 43B decreased significantly between 2003 and 2010 in response to harvest, a severe winter in 2009, and ongoing predator impacts,” continued Mr. Selinger. “As of fall 2013, the population had increased from the 2010 level and was believed to be at a reasonable target level. Unfortunately, further tag reductions were required for 2014 to mitigate the impact of 2014 winter severity. Winter 2015 was mild and a good fawn crop is expected this year.”

As The Expositor previously reported, there were 328 deer checked at the Espanola station in 2014. Mr. Selinger noted that this number was significantly down, but that there was a better fawn crop then the previous year with 77 fawns of the 328.

The data that Mr. Selinger presented at the meeting led to 250 antlerless tags being recommended by the committee for this year’s fall hunt for 43A and 3,500 for 43B.

All Ontario hunters can buy a deer licence (allowing you to harvest an antlered deer in Ontario), but hunters must apply to a draw for the limited number of antlerless deer (doe or fawn) tags in the WMU the hunter wishes to hunt in. Antlerless tags allow a hunter to harvest either an antlerless or antlered deer.

The preliminary tag recommendations will now go through a period of regional and provincial review before the MNRF makes the final decision on tag allocations, which will be made available to the public at the end of this month.