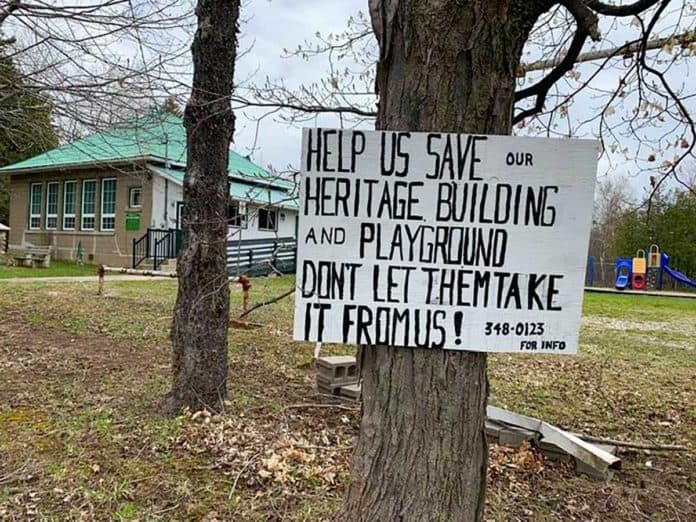 CENTRAL MANITOULIN – Mould and engineering assessment work will not be carried out at the Big Lake Schoolhouse following a decision made by Central Manitoulin council. Council had considered a property committee recommendation that staff proceed with the assessment at a cost of $12,000.

“I understand this is a very emotional issue but I’m trying to ensure we are spending wisely,” said Councillor Rose Diebolt. “Presently we have a community centre located 10 minutes away and both are under used. Spending $12,000 to determine the mould issue could lead to unknown costs and repairs.”

Ms. Diebolt noted that the Big Lake Community Association is supposed to be responsible for all maintenance costs and the municipality has already paid for roof repairs. “I will not agree to these costs until I see the financial situation of the association over the past five years to the present and anticipated future maintenance costs. I haven’t heard concrete plans.”

Councillor Derek Stephens agreed with Councillor Diebolt that other buildings are close but noted the community takes pride in this well-used building. “We have an obligation to listen to the people who are using it,” he said. “They may want to offer money for repairs. The structural condition of the building was up to us as the municipality.”

Councillor Stephens argued that $12,000 to determine the extent of the work required would be money well spent. “The association could possibly help with costs, like the Providence Bay Community Centre Board (PBCCB) did with kitchen repairs.”

Councillor Al Tribinevicius agreed with Councillor Stephens while Councillor Dale Scott agreed with Councillor Diebolt’s position. “When I was in business, investing $12,000 would be a starting point. Down the road we may feel obligated to make the repairs on the building. We need to have a couple contractors prepare a rough estimate of costs before spending the $12,000. What if the estimate comes in at $60-70,000?”

Mayor Richard Stephens acknowledged that COVID-19 makes it difficult to have the property assessed. “In May, it will have been closed over a year,” he said. “The community has not been able to use it to its fullest. It’s not a good comparison. We need to support the community.”

“I have gone back and forth on this issue,” said Councillor Steve Shaffer. “Before I entered the topsy turvy world of politics, I heard from many people that we had too many community buildings within the municipality. It seems an opportunity to follow our strategic plan. We do have other buildings 10 kilometres down the road from this one. The bottom line is there are a lot of buildings and duplication.”

“Why throw $12,000 into the wind to see if we are going to need to spend $50-100,000 to repair the building?” asked Councillor Shaffer. “If we are here as a representative of council for the good of all in the municipality, it is hard to rationalize the use of another building.”

“The building means a lot to people,” said Councillor Tribinevicius. “It has monuments to veterans of World War I and World War II. It’s a large centre with a kitchen, accessible space and playground equipment. It’s also the only community building in Big Lake. This council has spent money on banners promoting Big Lake and now you’re saying we didn’t need to spend that. I saw how much the building was valued in the report by Hal Love (market value appraisal of $100,000 to $120,000). It’s worth $12,000 to figure out what’s wrong with it. We could have contractors in to look at the building and provide an estimated cost for repairs.”

Councillor Angela Johnston stated that she agreed with Councillors Diebolt, Scott and Shaffer on the issue. “It’s a hard decision. I’m not saying we shouldn’t do this but I’m not sure any of our (municipal) buildings are well used. Maybe they (the association) would help with the $12,000, but until there’s a little commitment, I can’t support this.”

Councillor Stephens said he’d be willing to amend the motion to include a provision for the Big Lake Community Association to provide 20 percent funding. “If they commit to that, we can see they’re willing to make a commitment the same as PBCCB has. If we ask for 20 percent of $12,000 that should sway anyone.”

Councillor Diebolt said she had no problem with the suggestion but repeated that she wanted to see the association’s financial reports for the past five years, including how much money they have raised and how much they have put into the building. “Providence Bay (community centre board) has a healthy bank account,” she said. “I’d like to see that first before we make a commitment.”

“I have concerns with Derek’s suggested 20 percent,” said Councillor Scott. “What happens with the costs for the whole building? If we take $2,400 there’s no turning back. I agree there’s no business plan or commitment. I’d like to see their business plan and a set of financial records.”

Mayor Stephens noted, “There will be disappointed people on both sides of this issue.”

Councillor Stephens said he would withdraw the motion and that the property committee should speak with the association to obtain financials and other information requested. He suggested municipal clerk Ruth Frawley could reach out to the association for the information and following that, their executive could meet with the municipal property committee.

The committee agreed to withdraw the recommendation motion from the property committee.