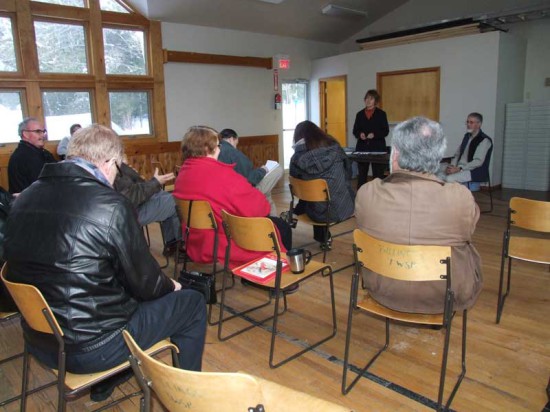 OTTAWA—Carol Hughes, MP for Algoma-Manitoulin-Kapuskasing, along with MP colleagues and NDP critics presented petitions signed by 3,619 Manitoulin Island residents, visitors and friends indicating they are unhappy with the ongoing water loss from the Lake Huron, Lake Michigan, North Channel and Georgian Bay basin, in Parliament on Wednesday. The petition calls on the Canadian federal ministers of natural resources, environment, fisheries and transport to increase their efforts significantly to halt and reverse the ongoing loss of water from the Great Lakes Basin.

Ms. Hughes, who was interviewed on the CBC Morning North program on Tuesday concerning the issue of water levels, told the Recorder, “we have the petition ready to roll, and our plan is to table some of the petitions on Wednesday.”

“About six of us will be putting forward water petitions,” said Ms. Hughes. “I will table one and several of my colleagues will be presenting all the petitions Mike (Wilton) sent in. We want to table this as many times as possible, and it will probably be introduced approximately six times in total. Our goal is to table it in front of all the MPPs several times.”

Ms. Hughes noted, “the government has not put in place any plans to address this issue and people should be concerned with this. We can’t even trust them on what action they will take with the spread of Asian carp.” She also pointed out, as has come out of the First Nations Idle No More demonstrations, “the government has gutted the Navigable Waters Act, as well as the Habitat Fisheries Protection Act and the Canadian Environment Assessment Act, which will have an impact on all of the Great Lakes. And since these acts were put in place, there has probably already been further deterioration in the lakes.”

“I would like to thank Chief Shining Turtle and the Whitefish River First Nation youth who organized a fax mob to bombard federal cabinet ministers with signed letters, outlining concerns about provisions in recent government legislation on Monday,” said Ms. Hughes.

“It is very important to understand that the affects of low water levels can be great. Water levels are relied on for freighter ships, and small businesses rely on water, as do fisheries and a variety of different people, municipalities, all citizens. And for instance if the Chi-Cheemaun can’t land in South Baymouth because of the low water levels it would be devastating. If we continue to dredge areas to provide short term solutions, it not only costs a lot of money, it doesn’t address the issue.”

“Some of the reason for the lower water levels can be attributed to diversion and climate changes,” said Ms. Hughes. “Maybe what the government should look at is compensating structures being put up in the meantime, while a more permanent solution can be found. There are economic, ecological and local and community considerations that need to be taken into consideration.”

Between February 27 and September 6, 2012 the petitions were displayed at 26 businesses and various gathering locations on Manitoulin Island. Of the signatures, 2,119 of these represent Manitoulin residents, 1,396 represent concerned off-Island Canadians and 104 signatures represent non-Canadians, mostly United States citizens, many of who live on Great Lakes shores and share the concern over this crisis.

The petition states, “we the undersigned request that the Canadian federal Ministers of Natural Resources, Environment, Fisheries and Transport increase their efforts significantly to halt and reverse the ongoing loss of water from the Great Lakes Basin in particular and the Lake Huron/Michigan/Georgian Bay/North Channel Basin in particular.”

“Since 1999, the water level in Lake Huron has dropped 4-5 feet (150 centimetres) with no sign of rebounding 13 years later,” the petition notes. “This is far greater than previous fluctuations and has caused immeasurable damage not only to significant aquatic wetlands and spawning areas along the shores of the North Channel, Manitoulin Island and Georgian Bay, but is causing serious economic and safety concerns to communities in this area, many of which depend in large measure upon tourism, cottaging and boating during the navigation season. The petitions were submitted to Ms. Hughes office staff by Mike Wilton who spearheaded the petition campaign.