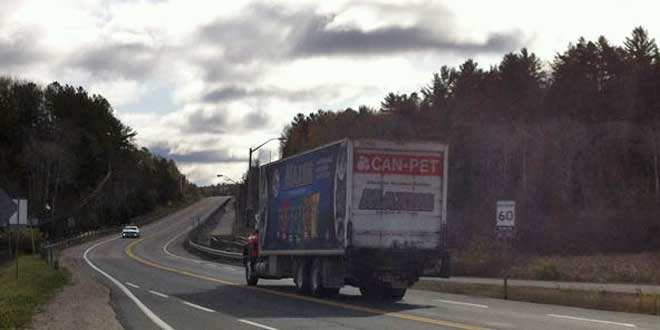 ESPANOLA—Algoma-Manitoulin MPP Michael Mantha intends to bring the issue forward again to the Minister of Transportation (Glen Murray) of needed repairs to the culvert crossing of Darkie Creek, just south of Espanola on the connecting link to Manitoulin of Highway 6.

This comes after receiving a second negative response from the minister on a Town of Espanola application for funds to repair the culvert.

“I did receive a response from the minister’s office, that the Town of Espanola didn’t qualify for funding under this round of funding,” Mr. Mantha told the Recorder last Friday. “The minister did encourage the town to apply in the next round of funding applications.”

“As soon as I get back to Queen’s Park I will be taking this issue and concerns directly to the minister,” said Mr. Mantha. “We are one disaster away from a hardship for businesses, municipalities and First Nations in the community and those on Manitoulin Island if something happens at the connecting link and traffic can’t move back and forth. It would have a serious impact on the economy if something happens.”

As reported in the December 20, 2013 edition of the Recorder, Mr. Mantha explained Espanola had been denied in this round of funding through the Municipal Infrastructure Reinvestment Initiative (MIII). He told the Recorder at the time he would be raising this issue with the minister again to explain how dire the issue is, not only for the town of Espanola but with each of the area First Nations, businesses and municipalities. He pointed out there are a lot of people who depend on this highway for their businesses and work.

Mr. Mantha said in December that he remained optimistic a solution would be found, as Mr. Murray said he would be following up with the MPP.

Mr. Mantha told the Recorder one of Mr. Murray’s assistants said a temporary solution could be considered with a liner being put in the culvert. “I haven’t got all the information on this, but this issue is something I’m not going to letting go,” adding he would be contacting the minister once again.