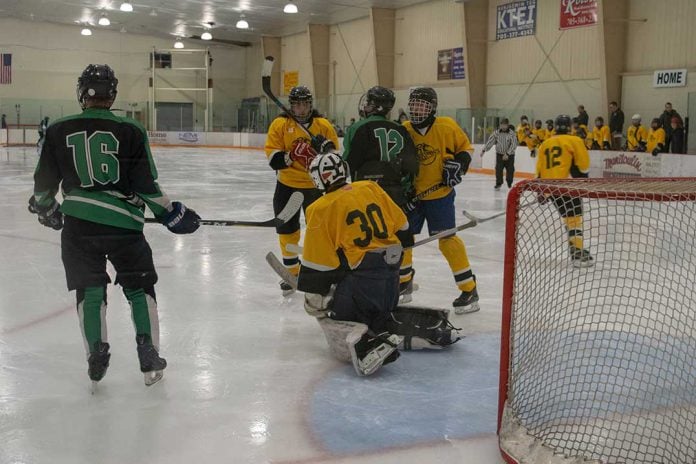 M’CHIGEENG—The Manitoulin Secondary School (MSS) Mustangs hockey teams are well into their 2018-2019 season and both teams have been fighting hard against their opponents.

“The girls are playing scary good. It’s truly incredible,” says girls’ team coach Mike Meeker. “This team is playing better than any team I remember at this point in the season.”

This praise for the girls’ Mustangs is far from unwarranted. The team is currently undefeated in the main season and Mr. Meeker says the whole team is strong and contributes to the victories.

“Sophie and Sam in goal have been really solid. It’s tough to be in the back and have no shots all game, and Sam goes from doing nothing to making a big save off a good player,” he says.

Moving up the ice, “our defense is the strongest set we’ve ever had. We have three sets and all three are solid. We can put them out in any situation and know they’re going to do well,” says Mr. Meeker.

He adds that he encourages his defense to rush in and join offensive plays, something they have embraced. These defensive players have a future with the Mustangs, too.

“Three of them are in Grade 9. I can’t imagine how good they’re going to be when they’re in Grade 12,” he says.

As for the team’s offense, Mr. Meeker is also pleased with how they have been playing.

“We’ve never had three solid forward lines that could score offensively. You put them on the ice and know they can score a goal. All three lines right now are scoring goals and playing good defense; our forwards are back-checking well,” says Mr. Meeker.

The team working so well together both on and off the ice is a product of many factors, according to Mr. Meeker.

“It’s partly luck of the draw, but I think it’s also that we have a really nice group of older players,” he says, referencing the age divides that often surface within school teams. “When they’re stuck on a bus together, they’re all just in a group at the back laughing and joking and enjoying themselves. It’s fun to sit up at the front of the bus and listen to them having fun.”

Similarly, the team does not have any particular outstanding players, something Mr. Meeker says improves the Mustangs’ overall success.

“We don’t have superstars. They’re playing together well as a team,” he says. “I always have fun with the teams but this year it’s not only fun, they’re blowing me away already. I keep telling them I have to go to the coach’s manual to figure out what to teach them next.”

Mr. Meeker says he is cautiously optimistic about the team but worries that they might not be challenged enough. The girls’ team routinely finishes games with well over five goals and little to no points for their opponents. In practices, he has to encourage the girls to try new techniques rather than trying old playing styles.

“In practice, they all want to take slap shots. I told them, ‘last year, we scored zero goals on slap shots. We have to practice wrist shots.’ Then, in the next game, Whit (Whittier Gauthier) scored our first slap shot goal in two years. I said, ‘great shot. You’re benched,’” says Mr. Meeker with a laugh.

The girls’ Mustangs have been in London in the first half of this week at a tournament. Mr. Meeker says he is looking forward to the tournament because, most years, the team is outmatched. This year he expects to play alongside the other teams quite well.

This team is regularly ranked in the mid to high spots in the league; last year they were in third place before the playoffs. Being the best team in the league is opening new possibilities for coaching and team development early in the season.

“I’m doing drills we don’t do until the playoffs, like cycling the puck in the offensive zone. This is all stuff that, in the past, most teams didn’t get to, or if at all, it was preparing for the playoffs,” says Mr. Meeker.

The boys’ team is not quite on the same level of success as the girls’ team, but the players are holding their own as best they can.

“We are sitting in the middle of the pack with five points,” says boys’ team coach Steve Doane.

The top team in the league, Val Caron’s L’Horizon, played against the Mustangs last week at the Little Current Howland Recreation Centre. The Mustangs fell 5-2 to the opposing team, putting their record at two wins, three losses and one tie. They currently sit in eighth place out of 11 teams in the league.

Val Caron is tied for the top spot with Sudbury’s St. Charles at five wins and one loss. St. Charles was at the Cardinal Classic hockey tournament that the Mustangs attended between November 16-18 in Lively. The Mustangs emerged with a record of one win and three losses.

“We won our first game 3-1 against Lively but were manhandled in the first 10 minutes of the game against Confederation.  The boys eventually came to life, but it was too late, and we ended up losing that game 6- 3. Close losses to St. Ben’s and Bishop Carter ended our tournament hopes,” says Mr. Doane.

Mr. Doane adds that the team has been playing well together but still has areas on which they can improve.

“The boys are coming along in most areas but as a team we are simply giving up too many goals. The goaltenders have been playing well but two-on-one chances are really hurting us against the more skilled teams. If you give up two-on-ones against teams like Bishop Carter and St. Charles, the puck ends up in your net pretty fast.”

According to Mr. Doane, in the next few games the boys’ Mustangs will play against some of the league’s top teams. These games are expected to essentially determine how the rest of the season will proceed.

“If we can keep the puck out of our net and the scores low then we will have a chance, but if we think that we are going to give up three or more goals against those teams and still win, then we are dreaming,” says Mr. Doane.

The boys’ Mustangs are heading to the annual NDA tournament in North Bay between December 6 and 8, an event that Mr. Doane says is enjoyable. There are 12 teams in the tournament that serves as a fundraiser for the North Bay Food Bank. It will be running a food drive and collecting donations instead of charging admission to the games. Last year, the tournament resulted in contributions of $1,500 and 136 pounds of food.