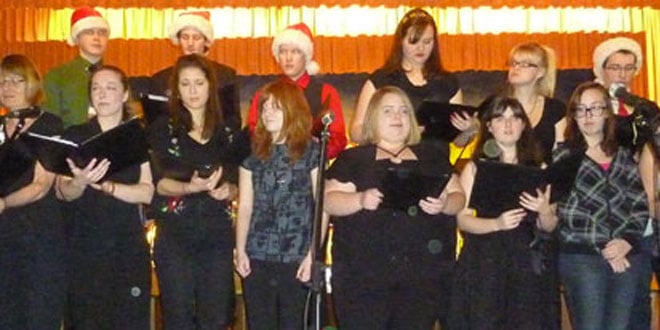 M’CHIGEENG—‘Twas no silent night Thursday, December 10 while students from across the Island rocked around the Christmas tree and their families braved the frightful weather for delightful music and treats.

Manitoulin Secondary School (MSS) hosted the Island-wide holiday concert December 10 to a packed house to ‘wow’ the crowd and get everyone in the Christmas spirit. The event was put on by donation on a ‘pay what you can’ basis while refreshments and baked goods from the community were also offered on donation.

“Thank you to everyone that could come out tonight despite the snowy weather,” said one of the organizers, Chris Theijsmeijer. “These are impressive numbers to see. I would just like to thank all of the community members and families that have supported the music program. Please sit back and enjoy the show.”

“Thank you for attending such a wonderful event. Tonight is a special gathering full of musical talent,” Yana Bauer said. “I want to thank Mr. Theijsmeijer, our organizer and conductor and our performers who will blow us away and make us proud.”

Ms. Bauer explained how the Joan Mantle trust benefits music programs in schools across the Island and generous donations, like the ones received for the Island-wide concert, benefits artistic programs for all schools on Manitoulin.

The MSS Concert Band and Senior Concert Band performed some classic Christmas songs like ‘Jingle Bell Rock’ and ‘Rudolph the Red-Nosed Reindeer’––a song inviting the audience to sing-a-long. The Senior Band performed a Dixie Land style rendition of ‘Let it Snow, Let it Snow’ which included Faith Beaudin, Alex Kategiannis, Eric Harper, Zach McCulligh and others performing like a rag-tag New Orleans band. The MSS Vocal Group sang a Christmas favorite, ‘Silent Night,’ but later in the evening, the group performed a less traditional song called ‘I Bought Me a Cat,’ a song that compares to the ‘Old Lady that Swallowed the Fly.’

The Assiginack Public School students received a great round of applause for their rendition of ‘Do-Re-Mi’ from ‘The Sound of Music,’ but the audience jumped out of their seats for their cover of a Lady Gaga song ‘Applause,’ which they sang as “A Claus.”

The Pontiac School guitar club from Wikwemikong performed a Christmas medley with hints of John Lennon and Yoko Ono’s ‘Happy Christmas (War is Over)’, ‘Greensleeves’, ‘Jingle bells’ and ‘Up on the Rooftop.’ The guitar club students were a focussed bunch, playing in unison during their teachers, Stephen Granville’s arranged song ‘Noodin’,’ translated to wind.

Central Manitoulin Public School (CMPS) from Mindemoya had their chance after intermission to ‘Deck the Halls’ and sing ‘Jingle Bells’ with another audience sing-a-long. Afterwards, the CMPS Drum Group, led by music teacher Ms. Erica Wadman, performed a drum improvisation, ringing their tam tams and djembes across the gymnasium walls.

The last, but not least, school performing before the solos and finale was the Lakeview School Choir, who performed ‘Where are you Christmas’ which had the audience in tears and brought a standing ovation.

“It is great to have communication between the different school boards on the Island and be able to host an event like this for the holidays,” Mr. Theijsmeijer said.

The finale ended with a grand combined ensemble, including the audience to a sing-a-long of ‘We Wish you a Merry Christmas.’

Interlude music was provided by DJ Scratchley Q, a musical MSS graduate from 2012. Manitoulin Transport was also thanked as a large supporter of music and art programs across the Island. 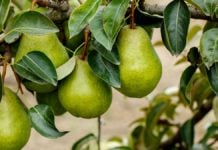 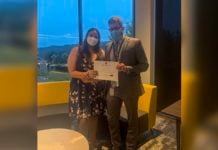 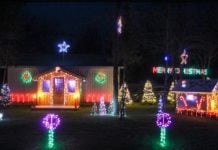 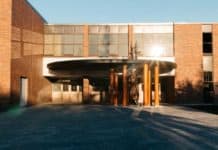 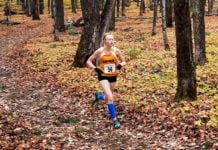