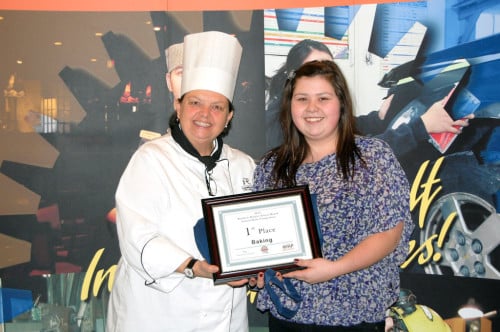 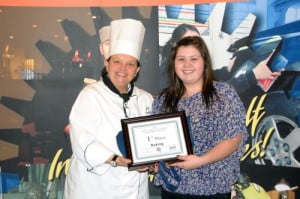 “On behalf of Rainbow District School Board, I would like to congratulate all of the students who participated in the Technological Skills Competition,” said board Chair Doreen Dewar in a press release. “We wish all students who are competing at the provincial level continued success.”

“I’ve always liked baking,” Tina told The Expositor. “I make cakes for family members when its their birthday.”

Tina explained that she owes her baking talent to her mom, grandmother and classes she has taken at MSS such as Hospitality and Tourism.

“My Hospitality and Tourism teacher Ms. (Dawn) McCann suggested the competition would be something I might be interested in,” said Tina. “I was supposed to be going with a friend, but I landed up just going with other students from the school so I was a little nervous.”

Despite her nerves, Tina said she went into the competition with a clear head, which was good because with only two hours to make six buns, a loaf of bread and decorate a cake, she had her work cut out for her.

“The most challenging part was the cake decorating,” added the young baker. “We were given a list of items we had to have on the cake like a border, flowers and a message.”

Tina was very excited when she was awarded first place in her division.

“I was really surprised, but very excited,” concluded Tina.

Also placing in the competition were fellow MSS Grade 12 students Randy Campbell and Devin Young, who brought home the third place award for carpentry in a team of two.

“We were very proud of our students, as we always are of MSS students,” said MSS principal Laurie Zahnow. “Tina, Randy and Devin are three really nice kids, who worked hard and represented the school well.”

Tina will be going on to compete with over 1,900 students at the Ontario Technological Skills Competition held in Waterloo from April 20 to May 1.

At the provincial competition Tina will be evaluated on practical, theory and a job interview and asked to make yeast bread, rolls, decorate a three-layer cake, bake 18 identical short dough cookies, three types of choux pastries and a lemon meringue pie.

If the MSS student places first she will advance to the Skills Canada National Completion hosted May 13-16 in Edmonton.