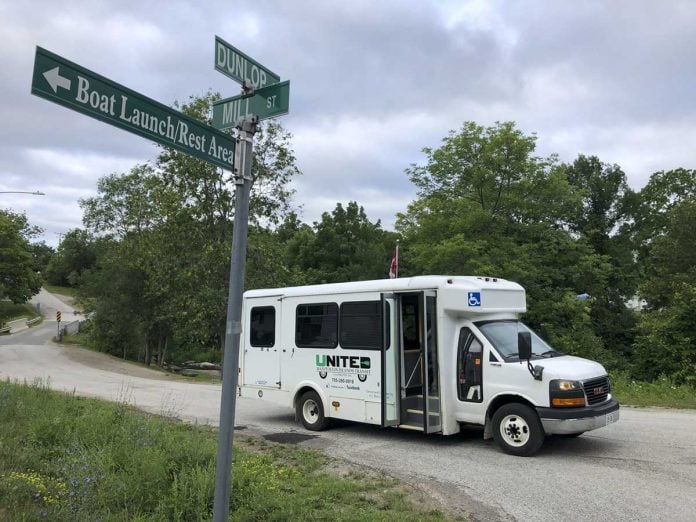 MANITOULIN – A presentation by representatives of the United Manitoulin Islands Transit (UMIT) co-operative seeking support for UMIT to access the municipal public transit portion of the provincial gas tax funds got a positive reception at a meeting of the Manitoulin Municipal Association (MMA), held by videoconference on Wednesday, August 19.

UMIT executive director  Berti brought the ask to the council meeting noting that the public transit service had just begun operating its eastern routes as part of a pilot project that week. While UMIT is only operating on the eastern portion of Manitoulin Island currently, they would like to expand operations to the west, including Gore Bay and Evansville, she explained. To that end UMIT would need to expand its available funds. “We need a letter of support from the MMA to access those funds from the Ministry of Transportation.”

UMIT chair Guy Dumas stepped in to provide background on his organization for the MMA members, noting that the push to create a viable public transit system on Manitoulin began in 2017. “It took many years to get to this point,” he said. “The first route is testing things out.” He went on to explain that UMIT is set up on a co-op framework (co-op is “an autonomous association of persons united voluntarily to meet their common economic, social, and cultural needs and aspirations through a jointly-owned and democratically controlled enterprise”) and that the co-op will be seeking to expand its stakeholder base. Currently, UMIT is being sponsored by the Municipality of Central Manitoulin which is administering the funding the group received to set up the public transit pilot.

The goal, noted Mr. Dumas, is to provide “low cost mobility benefits” to meet the needs of the Island’s divergent populations. To that end, different populations across Manitoulin had been surveyed to determine their needs. That study indicated the sweet spot for fares lies in the “five to seven dollar range.”

Evidence from across the nation indicates that “all public transit needs subsidization,” said Mr. Dumas, who went on to say that public transit provided significant and demonstrable economic benefits, including a rise in property values—a position he asserted was backed up in his discussions with FedNor. “Each dollar invested in public transit results in four dollars of economic benefit,” he said. UMIT’s goal is to prove those benefits by providing public transit for all of Manitoulin Island.

Although UMIT is based on a co-op model, Mr. Dumas assured MMA representatives that ridership will not be penalized by whether they are members or not. He also noted that UMIT decided to frame the fare structure in a positive rather than negative light.

MMA chair Ken Noland asked for clarification of what UMIT was seeking in its letter of support.

“Seems like a no-brainer to me,” interjected Reeve Noland.

Billings Mayor Ian Anderson asked the UMIT representatives if they had a package his council could review and Gore Bay representative Lee Hayden asked whether UMIT would be able to apply for the public transit portion of the gas tax and if the expansion to the west would be possible. Ms. Berti assured the members that UMIT would be happy to expand.

Northeast Town Mayor Al MacNevin agreed with Reeve Noland that accessing the public transit portion of the gas tax would be a “no-brainer” and suggested that people in his municipality would welcome the service.

Mayor MacNevin and Central Manitoulin Mayor Richard Stephens moved a motion to provide the letter of support for the concept which passed without objection.

Michael Erskine - September 15, 2021
EDITOR’S NOTE: In 2013 retired nurse and midwife Mary Buie approached The Expositor with a mission. She had recently been diagnosed with breast cancer...