WESTERN MANITOULIN – The three municipalities that jointly own the Gore Bay-Manitoulin Airport are applying for funding to replace and renovate the airport terminal building under a new program.

Lee Hayden, reeve of Gordon/Barrie Island township and chair of the Gore Bay-Manitoulin Airport board, told the Recorder, “at this point all we’re doing is applying for funding under a government program as we have been led to believe that the airport project should be a prime candidate for funding.”

Reeve Hayden pointed out all three municipalities who own the airport, including Gordon/Barrie Island, Burpee-Mills township and the Town of Gore Bay, have passed motions to apply for the funding for the airport instead of applying for funding of individual projects in their municipalities.

Mr. Hayden pointed out the municipalities had been informed by a Northern Ontario Heritage Fund Corporation (NOHFC) representative that an application for the airport terminal building would be a good fit under the funding program.

“We’re certainly behind applying for funding for the airport,” said Reeve Hayden.

Ken Noland, reeve of Burpee-Mills agreed that, “the three municipalities are going to be applying for funding for a new airport terminal facility. Under the Canada Infrastructure Fund Program-The Rural and Northern Communities provides funding of about 93.67 cents per dollar up to $5 million for a project.”

At a Gore Bay council meeting last week, Mayor Dan Osborne told council that under the Canada Infrastructure Fund, “we have been told the funding looks positive for the airport as it provides for a safety aspect as well.” He noted LAMBAC will help put together the funding application for the municipalities.

Robbie Colwell, manager of the Gore Bay-Manitoulin Airport told the Recorder, “current operational and customer demands reinforce the requirement for a modern, multi-use air terminal building that will attract more users to our facility and strengthen our appeal to a diverse aviation community. The reward of this project reaches far beyond the airport and will cultivate economic benefits by supporting health and safety, commerce and tourism within the entire region.”

“The building can serve as an emergency crisis management centre and will contain many features to deal with a large scale post-disaster occurrence,” explained Mr. Colwell. “The airport already has much of the key infrastructure to deal with this type of emergency and the new terminal building will allow us to enhance the deliverables for this situation when it happens. As we continued on our journey for growth and diversification of the airport, our current 72-year-old terminal building has become a limiting factor. The new facility will allow us to keep on track with our long term development plans for the airport.”

Under the Canada Infrastructure Program, The Rural and Northern Communities focus is to support transportation priorities in small rural communities. The program has four streams; the funding can go toward road assets, bridges, air infrastructure or marine infrastructure.  A criteria assessment includes health and safety, technical merit on how the project improves on reliable transportation infrastructure, funding need, and effi0ciencies through joint projects. 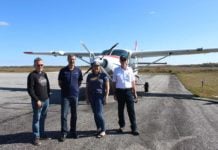 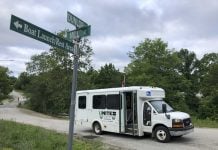