ROCKVILLE—The mayor and council noted a “complete lack of respect” at recent decisions made by the Mother Earth Renewable Energy project (MERE) that violated its road use agreement with the Northeast Town when they filled in a ditch early last week at the intersection of Bidwell and Rockville Road without notifying, or receiving permission, from the municipality.

In May, after careful consideration and review from the Northeast Town attorney, the municipality entered into a road use agreement with MERE.

The agreement allowed the project to access its site on M’Chigeeng land, moving heavy equipment and wind turbine components over an unopened road allowance in the Rockville area up the height of land known locally as ‘tower hill’ (because of a large communications tower located at the site) and accessing this unopened road from Rockville Road.

Part of the road use agreement was an independent civil engineer evaluation on the current conditions of Rockville Road and Bidwell Road, the section of Bidwell from Highway 540, past the Cup and Saucer to Rockville Road, which was the agreed upon route that MERE would take when transporting supplies to its project site. The evaluation was to assess the current conditions of the ditches and roadways in case of damage or road wear due to use by MERE.

A $50,000 deposit was agreed upon between MERE and the Northeast Town, should issues arise with the roadways.

The gravel that was placed in the ditch last week at the intersection, without permission from the town, was a direct violation of the road use agreement, in addition to MERE using an alternative route to its site, taking Highway 6 to Townline Road, over to Bidwell Road.

Town CAO Dave Williamson explained to The Expositor the municipality will now have to evaluate the roadways and ditches on the other side of Bidwell Road to determined its conditions.

“It was not our intent to evade discussions with you,” explained Graham Findlay of 3G Energy Corporation, MERE’s business consultants, to council at last Thursday’s meeting. “We were challenged to get the appropriate information on various levels, including the vendor of the equipment and the truckers themselves, and also challenged with people in the field in terms of getting things done,” he said. “So we have had issues with communicating and getting the appropriate instructions to people and we failed getting the right instructions to people as well as contacting you, but we did plan on contacting you once we had the information.”

Mr. Findlay told council he regretted taking until October 5 to contact the Northeast Town, but said he was surprised they did not get more information as to the needs of the truckers and said that the information they did receive was different from that of MERE.

“We had some challenges trying to decode the information we were given, so we made the decision to come to you and ask for the option to augment the sides of the roads on a temporary basis,” continued Mr. Findlay. “Unfortunately our field people had already gone ahead to fix the problem and we regret that it got out of our control.”

After carefully listening to Mr. Findlay, the mayor began by saying, “I hear the word regret, but we didn’t hear an apology and I didn’t hear why exactly you chose to do this without contacting the municipality.”

The mayor went on to say, “I think you filled in our ditch and if anyone else did that in our municipality they would be in a lot of problems. You know and I know that’s the issue here so please, let’s cut to the chase. You chose to do that and chose not to contact us so we deserve to know why.”

Mr. Findlay replied to the mayor’s questions, saying they both regret and apologize and that they were preparing the information to approach the town with, but that it had gotten out of their control at a field level.

“You already had the gravel in the ditch, sir,” Mayor Chapman said to Mr. Findlay. “Who made that decision?”

Mr. Findlay said they simply had a communication breakdown.

“I guess you did,” said Mayor Chapman. “It was a respect breakdown. Your action demonstrated a huge lack of respect for our community. You just chose to do whatever the heck you wanted to do with out consulting us in any way, shape or form. We have rules that we expect people to follow.”

“And do you realize that you screwed up, blocking the road and inconveniencing everyone in the community and on Manitoulin Island for two days?” added the mayor, referring to the overturned crane on Bidwell Road that was being transported to the MERE wind farm site.

Mr. Findlay apologized for the overturned crane and the subsequent problems that occurred, but stated that it was “an unrelated incident.”

He then referred to a request to the town, stating, “It is clear that the trucks need additional space for clearance purposes as a matter of safety.”

In the request, Mr. Findlay asked the town to grant permission for MERE to place granular gravel along the side of the roads at the intersection of Bidwell and Rockville roads to insure safe truck traffic to the MERE site.

“Once completion of the second turbine is done and the crane trucks have departed in two weeks, MERE will remove the gravel and material, restoring the sides of the roads,” explained Mr. Findlay.

He also explained that stop signs may have to be removed for the six blade transits, but would be reapplied immediately after every transit.

“Our position is that we will consult with our engineer, Ray Spangler, and when we receive that report in conjunction with you, I’m hoping then we will get together as a council to make the decision of whether or not we will agree to your requests,” the mayor said. “We will also have to reevaluate our position with respect to any costs that may occur because of this and the deposit of $50,000.”

Mayor Chapman concluded the discussion by stating, “You know we are really annoyed because all you had to do is pick up the phone and you didn’t even show us that basic form of respect. The town office number is 705-368-3500. We hope this moves forward more smoothly in the future.”

The Expositor followed up with the Northeast Town and learned that a meeting had been set up between Mr. Spangler and MERE, but as of press time, a date for the meeting had not yet been set. 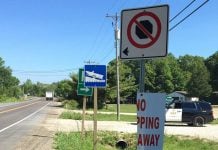 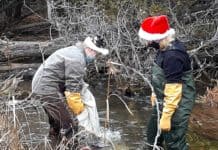 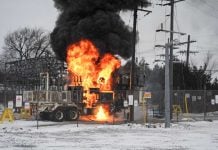 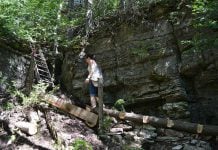