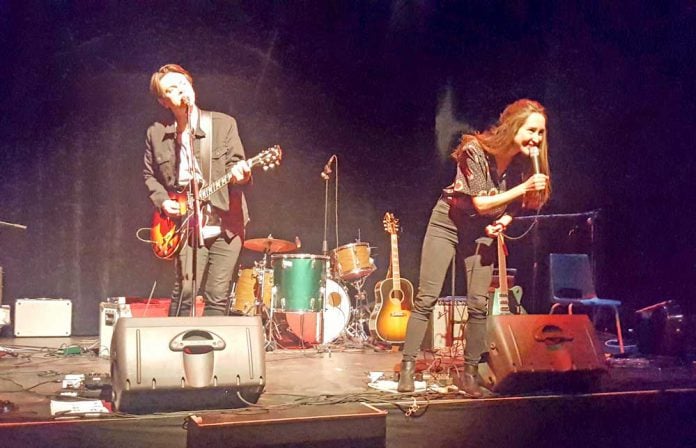 The event was offered free of charge and included two shows last Wednesday night. There are a number of artists that form the tour, but performers at the Debaj show included: the Toronto alternative rock band July Talk, who received the 2015 Juno Award for Alternative Album of the Year; Indigenous writer and musician Leanne Betasamosake Simpson; Jeremy Dutcher, an emerging Toronto-based composed and vocalist from Wolastoq Nation; Ansley Simpson, an Anishinaabe singer-songwriter and the winner of the inaugural BullsEye competition at imagineNATIVE’s 2016 Festival; Jason Collett, a Toronto-based Canadian singer-songwriter and member of Broken Social Scene; and poet Damian Rogers.

New Constellations kicked off on November 23 in Saskatoon and will end in Toronto on December 20.

“This half-music, half-literary national tour is the first of its kind: a unique tour travelling to cities, towns, and Indigenous communities featuring a core roster of Indigenous artists alongside a rotating cast of some of the country’s most celebrated musicians, writers, and poets,” explains a press release from New Constellations. “New Constellations offers an intimate evening of song and storytelling featuring alternating sets by musicians and writers. The tour includes a two-part mentorship program where established artists connect with Indigenous youth online and in a series of community-based arts and music workshops. New Constellations offers new possibilities for creative collaboration across communities.”

“Besides being a rotating roster of festival-style performances, New Constellations is an intimate opportunity to listen to voices of resurgence — of what is clearly an Indigenous Next Wave,” said Jason Collett. “The momentum is palpable, and it’s inspiring to be a part of such a special celebration.”

For more information about the tour and dates visit www.newconstellations.ca.