COCKBURN ISLAND—On World Water Day this past Friday, March 22, the Nature Conservancy of Canada (NCC) announced a campaign to expand a large conservation area on Cockburn Island. If successful, it will become the national not-for-profit land trust’s largest land conservation project in Ontario.

Presently, NCC has protected 25,055 acres—over 60 percent of the island—along with 48 kilometres of undeveloped shoreline. The group announced it is now trying to add another 1,400 acres to these existing conservation lands.

For more than five years, NCC has been leading an international effort to acquire a rich blend of forests, beaches, wetlands and inland lakes on Cockburn Island—one of the few undeveloped islands in Lake Huron

In an international study of 32,000 islands in the Great Lakes, Cockburn Island ranked eighth overall for its importance to conservation, a press release from NCC notes. “The current acquisition will protect an important portion of the interior forests on Cockburn Island. This will provide a critical north-south link between existing NCC lands, provide habitat for interior forest birds, facilitate the movement of large mammals, and protect the highest point of land and headwaters of the island.”

Accessible primarily by boat (or snowmobile in the wintertime, when the weather permits), Cockburn Island provides important stopover and breeding habitat for migrating songbirds and waterfowl, including chestnut-sided warbler, wood thrush and the threatened Canada warbler. The island also supports wide-ranging mammals, such as black bear, white-tailed deer, grey wolf and coyote. The rivers and creeks support both resident and migratory fish species.

NCC hopes to complete its fundraising by May. The conservation organization needs to raise $100,000 in land acquisition and stewardship funds to complete the project. The total budget for the project was $15.2 million, of which $10.2 million had been raised soon after it was announced in 2013, including a $5 million pledge from an anonymous American conservationist.

This project is the first of a larger, multi-year campaign, called Keep Huron Wild, to protect the islands, bays and coastal lands that surround Lake Huron—from Grand Bend, along the Saugeen Bruce Peninsula to Manitoulin Island.

With ever-increasing development in southern Ontario, it is rare to find such a complete and intact ecosystem like that of Cockburn Island. The growing demand for second homes and cottage developments has not reached Cockburn Island like it has in other parts of Lake Huron.

In an interview with The Expositor, Vince Deschamps, NCC program director for midwestern Ontario, explains that Cockburn is representative of how southern Ontario and its islands used to be, pre-contact. Note that Mr. Deschamps used the words ‘southern Ontario.’

While Manitoulin Island, including Cockburn, is always noted as part of Northern Ontario, its physiology is more like that of southern Ontario, he explains.

“Only a few hundred people visit every year and there’s only one full-time resident and a dog who live there,” Mr. Deschamps says. “It’s really an incredibly rare resource that’s worth protecting. There have been very few influencers.”

Cockburn Island was opened up for agriculture and logging in the late 1800s, but its isolation resulted in the abandonment of many homesteads, the press release explains.

There is one community on Cockburn, Tolsmaville, which consists almost purely of seasonal cottages and camps.

Mr. Deschamps said NCC is “very fortunate” to have the support of the municipal council, the island’s fishing and hunting club and the Ministry of Natural Resources and Forestry.

In 2013, this newspaper published a story of Cockburn Island council’s support of the NCC’s bid to purchase 22,000 acres.

“This is a letter of support for the Nature Conservancy of Canada’s (NCC) project to conserve over 22,000 acres of forest land on Cockburn Island,” the January 2013 letter from council states in part. “NCC’s goal is to have most or all of its property revert to an old growth forest and be a site for ecological research. This aligns with almost every islander’s vision for our community. Council members realize that NCC holding the land for conservation appears to be very compatible with our goal to have our island home remain almost completely undeveloped. With its beautiful shoreline and rich forest, we have long been concerned that a developer at some point in time would buy up a large block and then harm the landscape through some combination of intensive commercial development of the shoreline or interior that might compromise the natural beauty of our island.”

Mr. Deschamps said NCC has been working hard over the years to try and gain the trust of the people of Cockburn Island.

“They invite us with open arms and we try to attend local events,” Mr. Deschamps adds, noting that he has been involved with many a late-night card game on Cockburn Island during his three or four weekend a year visits.

“I have travelled around the world and this is one of the most amazing—remote, exotic, untouched—places I have ever been,” Mr. Deschamps says of Cockburn Island.

To donate to the NCC’s cause, visit keephuronwild.ca or contact Nicole Senyi at NCC by calling 647-496-2095. 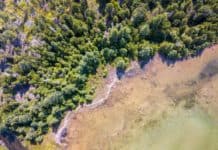 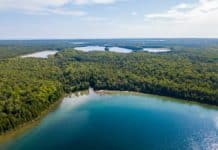 Michael Erskine - July 28, 2021
OTTAWA - It was an historic day at Rideau Hall on Monday as Mary Simon, an Inuk from Kuujjuaq in northeastern Quebec, was sworn...