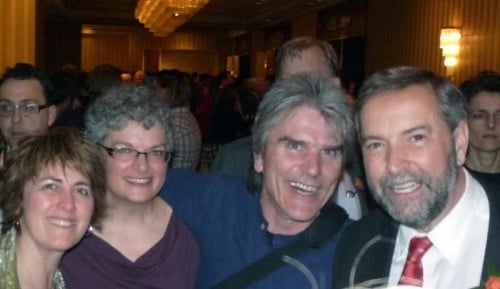 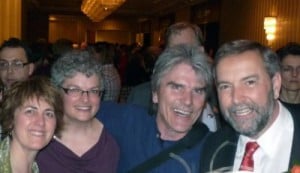 TORONTO—For Thomas Mulcair, the new leader of the New Democratic Party (NDP), his biggest opponent may not be Prime Minister Stephen Harper, but the ghost of his party’s former leader, Jack Layton.

Mr. Layton died last August after a battle with a secondary cancer. Despite his cancer, the NDP leader campaigned during the federal election and led a surging “Orange Crush” to virtually destroy the Bloc Quebecois and take many seats from the Liberal Party and form the official opposition to Stephen Harper’s Conservative Party. It was the best finish for the NDP party in its history, one that quickly turned bittersweet as Mr. Layton’s health rapidly deteriorated.

On the ballot to take over from Nycole Turmel, the interim leader named by Mr. Layton when he stepped down to focus on his health, were Mr. Mulcair, a long-serving Quebec NDP MP and co-deputy leader; Brian Topp, the party president; Martin Singh, an NDP supporter from Nova Scotia; Nathan Cullen, Peggy Nash, Niki Ashton and Paul Dewar, all NDP MPs. Romeo Saganash, another NDP MP, originally put himself forward but then withdrew from the race.

“Niki is young and she is smart,” Dr. Reade said. “I felt she would be the best choice to move the party forward.” Like Ms. Hughes, though, Dr. Reade threw her support behind Mr. Mulcair after Ms. Ashton was eliminated in the first of four ballots. Noting their low results, Mr. Dewar and Mr. Singh both withdrew as well.

According to Mr. Maxwell and Dr. Reade, the convention, held in the Metro Convention Centre in Toronto, was a smooth operation.

“They had to move it (the convention) because too many people said they were coming,” Mr. Maxwell noted. Roughly 175 computer-voting terminals had been set up for the more than 4,000 convention attendees to use to vote during each ballot.

“The first ballot started Friday night and finished the next morning,” Mr. Maxwell said. “Everyone had a lot of time to vote.”

The system used by the NDP party during its leadership convention also allowed card-carrying party members to vote from home via the Internet, as well as by advance ballots. Members who could not travel to Toronto weren’t cut out of the action.

Everything did not go smoothly, however. The second and third ballots were delayed by roughly an hour, after Denial of Service (DoS) attacks from the Internet shut down the worldwide web voting options.

People were at first annoyed with the delays, Mr. Maxwell said, but once it was explained that the delays were because of a cyber-attack and party members weren’t able to vote, “the annoyance went away,” Mr. Maxwell said.

“Nathan (Cullen) was the most like Jack,” Mr. Maxwell said. “He is open, vibrant and an easy conversationalist, but he’s a young MP. He and Niki (Ashton) are very active in the party and I can’t wait to see what they’ll bring in the future.”

The ultimate, final-vote leadership battle was between to Mr. Mulcair and Mr. Topp, a battle that had been predicted when both men declared their intent to seek the party leadership.

Mr. Topp, president of the national NDP party, stepped down from that position to run for the leadership position. Like Mr. Layton when he became party leader, Mr. Topp had never had a seat in the federal parliament and would have had to win a by-election in order to have a seat in the House of Commons, had he won.

Leadership battles in a political party can often cause hard feelings and rancor, Dr. Reade and Mr. Maxwell noted. None of that was present when the final vote put Mr. Mulcair well in the lead.

“On stage, after the winner was announced, Thomas (Mulcair) grabbed Brian (Topp’s) hand and lifted it up,” Mr. Maxwell explained. “It was a party victory. We now have a leader. The crowd was cheering ‘party together’ in French.”

“It was a show of respect,” Dr. Reade added. “No rancor whatsoever.”

Both said they were satisfied with what Mr. Mulcair has to bring to the party.

“He’s been the co-deputy leader since 2007, has held high profile positions within the NDP, he held a provincial Liberal post in Quebec before that,” she explained (Mr. Mulcair held a seat in Jean Charest’ Liberal cabinet). “Only because there was no NDP party and he didn’t want to run Conservative. The talk about a Liberal-NDP merger and his Liberal connection is very overplayed.”

For Mr. Mulcair to be successful, Dr. Reade said he will need to carry on Mr. Layton’s legacy of optimism, hope and youth engagement, but must not emulate the former leader.

The spirit of Mr. Layton was very evident during the entire convention, Mr. Maxwell and Dr. Reade agreed.

“There were a lot of Jack stories,” Dr. Reade said. “He is missed by everyone.”

The convention opened on Friday night will a stirring speech by Mr. Layton’s widow, MP Olivia Chow. Behind her, as she spoke about her husband and the party, images of the chalk-written tributes at Toronto’s Nathan Phillips Square, were displayed.

Messages like ‘You gave us hope,’ ‘It’s not fair,’ and ‘I voted for the first time because of you’ were seen by all. The engagement Mr. Layton had with all age groups was seen in the convention centre too, as there was a huge mix of age groups, Dr. Reade said.

“There were a lot of youths present,” she said. “They were engaged. There were older people present. Some were dancing, others were leaning on walkers. It was very multi-generational.”

Engaging youth was one of the reasons the AMK MP threw her support behind Niki Ashton.

“She’s young and I think she could entice people and get our youth engaged,” Ms. Hughes said. “There are many youths who are interested in the ideals of the NDP who aren’t perhaps voting and I think Niki could reach them.”

With Ms. Ashton out on the first ballot, Ms. Hughes said she had to decide between Mr. Mulcair and Mr. Topp. Ms. Ashton, upon her defeat, did not endorse any one of the remaining candidates.

“Both Thomas and Brian have good experience and would do a good job,” Ms. Hughes noted. “One of the big considerations for me was Brian’s lack of a seat.”

According to Ms. Hughes, it could take almost a full year before Mr. Topp could earn a seat in the House of Commons, and the seat wouldn’t be guaranteed.

“We would have to have a by-election,” she explained. “Someone would have to step down. Then it is the prime minister’s choice on when to call the by-election. He could drag it out nine months. It just wasn’t something I wanted to risk.”

There was always the chance Mr. Topp wouldn’t win the seat, either, she noted.

“Thomas (Mulcair) will take up the path Jack has paved,” Ms. Hughes said with confidence. “He will fill the position easily and eloquently. He’s been Jack Layton’s right hand man since he was elected and some day he will make a wonderful prime minister.”

The second-term MP for AMK wasn’t even remotely tempted to run for the top job in the party, she said, but it didn’t stop people from encouraging her to try.

“AMK is huge,” she said. “It needs an MP who is really focused on it. Being party leader creates sort of a void in the riding because the MPs attention is split between the riding and the country.”

She said she expected that Nycole Turmel, the woman who has led the NDP as interim leader, is likely feeling much the same way and is happy to return to being ‘just’ an MP for her riding.

“She has been everywhere,” Ms. Hughes said. “Canada is big. She has been at the forefront and making things ready for the next leader and holding us together. And she was just elected in the past election.”

Despite her new status as MP, Ms. Turmel came with a resume of leadership positions that made her very suitable for the job, Ms. Hughes said.

The quiet star of the convention was Ms. Chow, Ms. Hughes noted.

“The tribute to Jack put on by his children and Olivia was amazing,” Ms. Hughes added. “A lot of people were wiping their eyes, including me.”

Ms. Chow did not publicly endorse any of the candidates, and instead remained neutral.