MANITOULIN—Effective this past Monday April 1, the federal government has implemented a carbon tax on fuels that emit greenhouse gases.

The tax applies to the four provinces that do not have their own carbon pricing schemes—Ontario, Manitoba, New Brunswick and Saskatchewan—and represents a cost of $20 per tonne of greenhouse gas emissions. This will effect an approximate 4.4 cent per litre increase on gasoline with similar amounts on heating oil, natural gas and propane.

However, residents will receive rebates on their federal tax returns to compensate for the higher costs. Roughly 70 percent of Canadians under the federal carbon tax regime will receive more in rebates than they will spend in higher taxes.

That rebate is included in their 2018 tax returns, meaning those who filed early will have seen their rebates before the carbon tax took effect.

Ontario used to have a cap and trade program in place—essentially, companies received credits for reducing their emissions and those credits could be bought by heavier polluters—but the provincial Ford government replaced that program with an alternative carbon pricing scheme that compensates manufactures for reducing their carbon footprint. This new program does not meet the federal government’s criteria so Ontario now falls under the federal carbon tax.

Manitoulin-Sudbury District Services Board Chief Administrative Officer Fern Dominelli said the lower-income clients that rely most heavily on his organization will be impacted by a higher cost of living.

“Most of the people we serve can’t wait for once a year to get a cheque back,” said Mr. Dominelli. “For people on fixed incomes like social assistance, that’s a big challenge.”

He added that this may increase the number of families who rely on food banks.

Central Manitoulin Mayor Richard Stephens said he was expecting higher fuel costs for the municipality but that they had not done the cost analysis yet.

“We have a large fuel tab so it’s going to have an adverse effect on our operations for sure,” said Mayor Stephens. “We have trucks on the road in the wintertime on a regular basis, then fixing and repairing roads in the summertime too.”

The provincial candidate for the Green Party in the riding of Algoma-Manitoulin this past election was Justin Tilson. He said the tax was designed to encourage energy efficient behaviour.

“There’s a built-in incentive for people to possibly get a hybrid car or think electric when considering their car choices,” he said. “I think it’s suicidal to our species to not do something about this. It’s one of the simplest things we can do to start steering our economy away from such carbon intensity.”

When asked about the increases people will face on their daily bills, Mr. Tilson acknowledged that it will have an impact but he said the roughly four cent increase in gas prices will not be devastating.

“These impacts are relatively neutral overall but the rebate gives people some choice on how they can reduce the impact,” he said.

Anishinabek Nation Grand Council Chief Glen Hare said he has seen changes from the first day of the carbon tax across a wide swath of Ontario, including gas prices that jumped to $1.36 per litre in Marathon. Gas price spikes impacted Ontario First Nations two years ago as well.

“I wish they would consult with us more and give us more of a heads-up, rather than these sudden changes and increases. It seems like it happened overnight,” he said.

A lot of the conflict comes from the different impacts in rural communities compared to cities.

“Change in the cities, you can do that overnight, but up here you can’t,” Grand Council Chief Hare said. “They can afford it but we can’t and we’re caught. And then they wonder why we’re upset.”

McDougall Energy is a major fuel supplier on Manitoulin island. Ed Charlton, the company’s vice-president of strategy and environmental planning said the tax is applied on energy companies from the federal government and the companies then pass along the tax to the consumers.

He said the impacts on individuals’ energy consumption is difficult to predict at this time.

“From a discretionary point of view, people may consume less. From an economic and business point of view, I’m not so sure it’ll change people’s consumption a great deal,” said Mr. Charlton, adding that the company will continue improving and investing in operating more cleaner-burning, efficient technology.

Another major business in the area is Domtar, which employs a considerable workforce in Espanola. Regional public affairs manager Bonny Skene said the company was concerned about the impact on its specialty paper mill in Espanola. She said Domtar is working with provincial and federal governments to ensure their strategies “recognize past investments in emission reductions, the mill’s extensive use of carbon-neutral biomass fuels and the need for the mill to remain competitive on a global scale.”

“I don’t think anybody in the riding who understands this feels we shouldn’t be doing anything. It’s a question of how we should be getting there,” she said.

Ms. Hughes criticized the way this legislation was introduced as part of the ‘omnibus’ Budget Implementation Act this past June.

“This issue is so important and it was not able to be debated the way it should have been,” said Ms. Hughes. “We didn’t hear all the discussions that needed to be had which is very unfortunate. At the end of the day, we all have to tackle climate change together.”

The scrapping of Ontario’s cap-and-trade program was also criticized by Ms. Hughes as well as the federal Liberals’ energy goals which do not reach the 45 percent emissions reductions targets for which climate scientists have been urging.

Concerned Mindemoya resident and environmentalist Jan McQuay said many have ignored the rebates that will help offset the carbon pricing increase.

“The Conservatives have been painting it as a punitive thing that’s going to hurt consumers, but it’s actually an economic tool to direct people’s expenditures in a more environmentally responsible way,” said Ms. McQuay.

“To me, this is perfectly logical and it’s been used in BC for many years,” she said. “If you give money back (as a rebate), you’re not hurting people, just redirecting where they spend their money so they don’t use the atmosphere as a garbage dump.”

“There’s inertia at play because people don’t want to change. People are being handed excuses by climate change deniers, but the science is there,” said Ms. McQuay. “Look at climate science. That’s all the proof you need.” 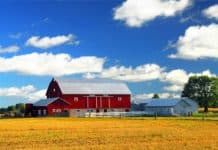 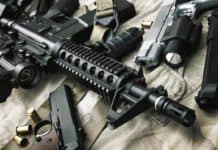 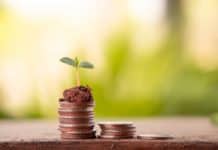 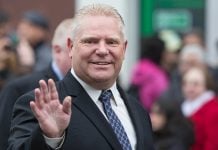 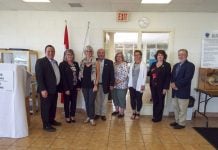