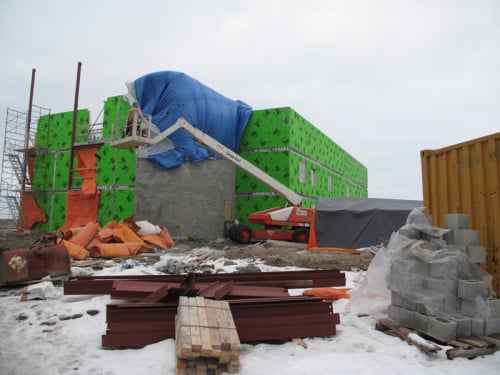 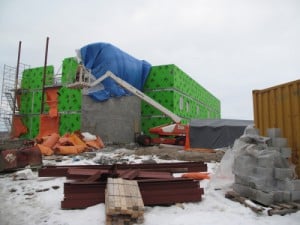 LITTLE CURRENT—Construction of the new hotel in Little Current being built by a consortium of area First Nations represented by the Great Spirit Circle Trail (GSCT) is gaining hype and height, as its third floor is constructed.

“Construction is moving along well,” said GSCT manager Kevin Eshkawkogan. “Anyone passing it can see that it is going up pretty quickly.”

The $10.8 million project was three years in the making, after the GSCT identified a gap in the Manitoulin tourism industry and developed the project to grow tourism for not just First Nations, but the region as a whole.

The hotel will feature 58 rooms, a 50-60 seat restaurant and large patio, an outdoor pool overlooking the North Channel, and a conference area that will accommodate up to 350 people.

Ms. Eshkawkogan said the project is pretty much on schedule, despite delays in October due to heavy rain and December with the geo thermal issues.

“We have made up for some of the delays due to the relatively warm weather this year that has allowed masonry work do be done,” explained Mr. Eshkawkogan. “This will also have a positive effect on the budget.”

Mr. Eshkawkogan said the fourth floor will be going up over the next few weeks, with the roof construction estimated to be completed by the end of March.

On the administration side of the project, Mr. Eshkawkogan said the GSCT has received many resumes for employment at the new hotel.

“We have received a lot of resumes and are formulating a database,” said Mr. Eshkawkogan. “We would like people interested in working at the hotel to take initiative and apply.”

The GSCT manager recommended that anyone interested in applying do so “sooner rather than later.”

“Don’t wait for the posting,” he recommended. “We are taking resumes now through the GSCT.”

Mr. Eshkawkogan said that many of the applications they have received have been from local applicants, or individuals originally from the Island, looking to obtain employment and return home.

The GSCT has decided to contract a hotel management group to run the hotel.

“We have many interested groups, but will be requesting formal expressions of interest from hotel management firms by invitation beginning soon,” explained Mr. Eshkawkogan.

Also still in negotiations is the hotel’s restaurant space, which will be leased.

“Group members are still in negotiations with interested parties,” said Mr. Eshkawkogan. “Again, we have had a lot of interest, but we will be holding a formal request of interest before reaching a decision.”

The hotel is scheduled to be completed by mid to late June.

For more information about the GSCT or to apply for a position at the hotel visit www.circletrail.com.