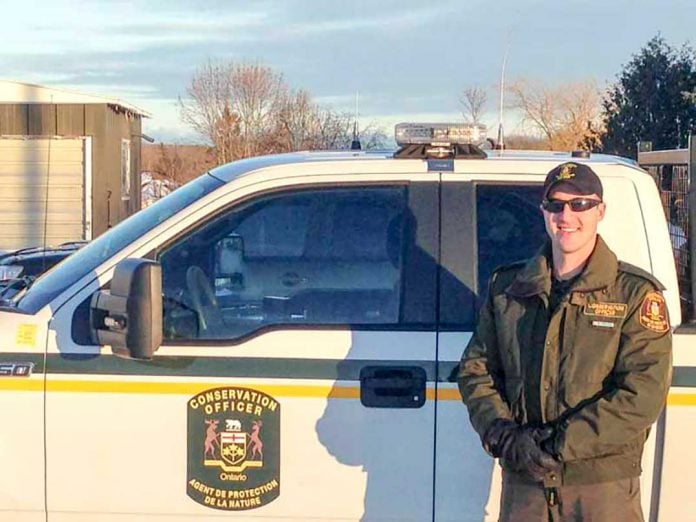 MANITOULIN—Being a conservation officer (CO) is something that Iain McGale has always wanted to do.

“This has been my lifelong career goal; to become a conservation officer,” stated Mr. McGale, who has now officially filled a second CO position, which had previously been vacant with the Sudbury Enforcement Unit of the Ministry of Natural Resources and Forestry (MNRF) on Manitoulin Island. “I enjoy hunting and fishing myself and am looking forward to getting to know the area and the people in the community.”

Mr. McGale is originally from Barrie and officially started as an MNRF CO August 15, 2016, when he started in training. “This is my first week on the Island and my first posting as a conservation officer,” he told the Recorder last week.

He explained when he was first hired by the MNRF he had to undergo a training program which ran from  from August to December, both in Sault Ste. Marie and in Aylmer.

“My career with the ministry (MNRF) started as a park warden at Woodland Caribou Provincial Park,” said CO McGale. “This lead into an operations technician position with Ontario Parks and then I worked with Red Lake with the MNRF office as a resource manager technician.” Most recently he has worked as an integrated resource management technician specialist. In total he has worked for the MNRF and Ontario Parks for approximately five years, working in Red Lake, Kenora, Dryden and Pickle Lake.

“I am looking forward to working on Manitoulin Island,” said Mr. McGale, who is married and the couple has one child. “I have been to Manitoulin previously, having visited a couple of times.”

By filling the previous vacant position, “Manitoulin Island will now have two full-time permanent COs on the Island,” added Mr. McGale.