LITTLE CURRENT—The Kingdom Hall in Little Current is hosting open houses this weekend to unveil its new building to the community.

The short 10-week construction project was made possible thanks to volunteers from community and national Jehovah’s Witness congregation members.

“The entire new hall was built by volunteers,” explained LeeAnn Fawcett, who gave The Expositor a tour of the new building along with her husband and church elder Dan Fawcett. “There is a group of volunteers who travel throughout Canada building or renovating halls. Locally, people were asked about their skills and helped on site with everything from building to painting. Individuals (of the congregation) helped other ways too such as providing meals and accommodations. It is wonderful to be able to look around the new hall and know that we built it together.”

“We were outgrowing our old building and it was determined that it was time to replace it opposed to doing renovations,” said Mr. Fawcett.

The old hall was torn down on June 5 of this year and construction on the new building started on June 8. The building was completed and the first meeting in the new hall was held on Sunday, August 20. 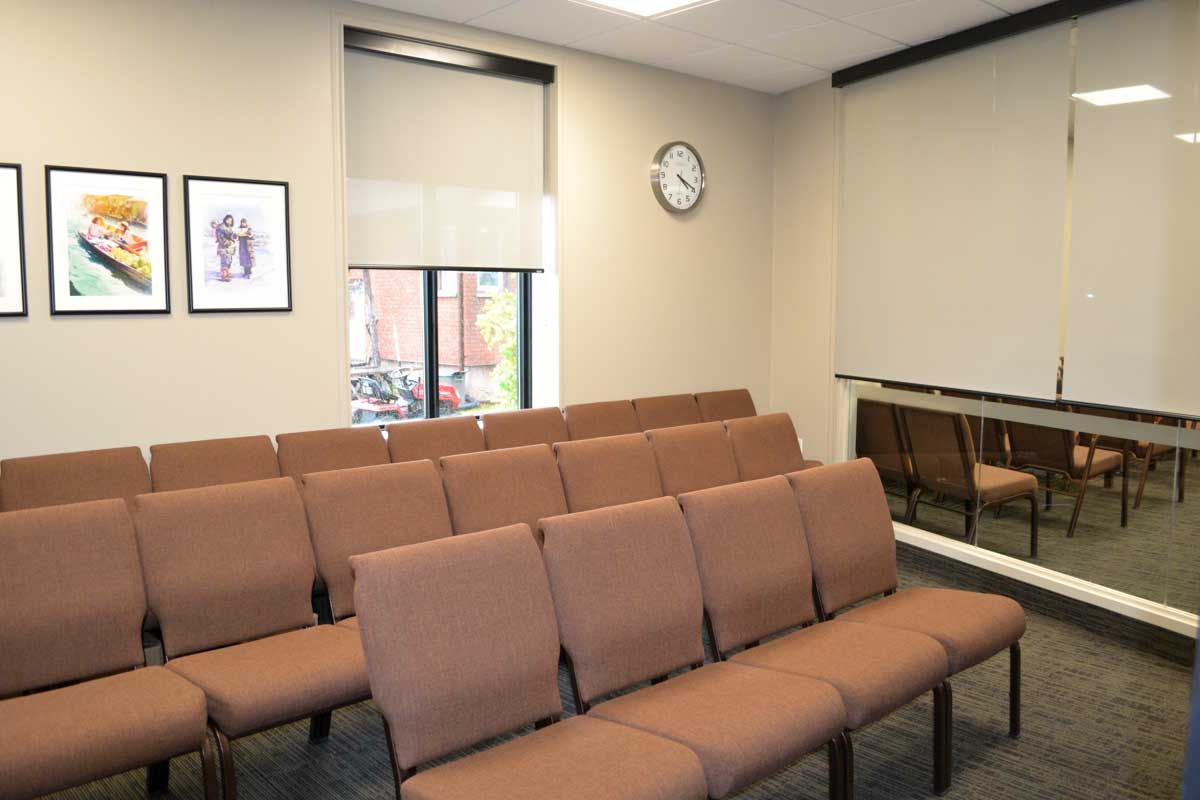 “The new building is all sensored and features LED lights,” explained Mr. Fawcett, noting that it is very green and energy efficient. “It knows when people are here and exchanges the air four times an hour, which is very helpful for people with allergies. It was also built using concrete foam, which maintains the temperature, and we have in floor heating.”

The new facility is also wheelchair accessible, with a ramp up to the stage in the main room.

“We were pleased to get new chairs as well,” shared Ms. Fawcett. “The building is designed as a package so we didn’t need to worry about anything.”

There are no paid workers at the Kingdom Hall—from the building of the new hall to running the church, everyone is a volunteer.

The Little Current Kingdom Hall has a core group of 40 members with seven elders who take on various roles such as accounting, education and speaking at meetings.

The building was paid for by the Jehovah’s Witnesses. All contributions made to the church are forwarded on to help build other halls around the world, as well as provide relief work.

There are two main rooms: the large meeting room and a smaller meeting room that can accommodate additional people or be used as a multi purpose room. Together the rooms have a capacity of 85.

“We have dual monitors in the main room and one in the smaller meeting room that can all play the same program,” said Mr. Fawcett. “We use it for music, videos, pictures and for presentations. We have an upgraded phone system as well using the Internet that allows people who can’t make the meeting to listen from home.”

The Kingdom Hall is always open to the public, but this weekend the congregation wants to encourage members of the community to come see the new building and join in the celebration.

The Little Current Kingdom Hall of Jehovah’s Witness is located at 51 Wilson Street. The open house will be held on Friday, November 10 from 4 to 8 pm and on Saturday, November 11 from 10 am to 2 pm.