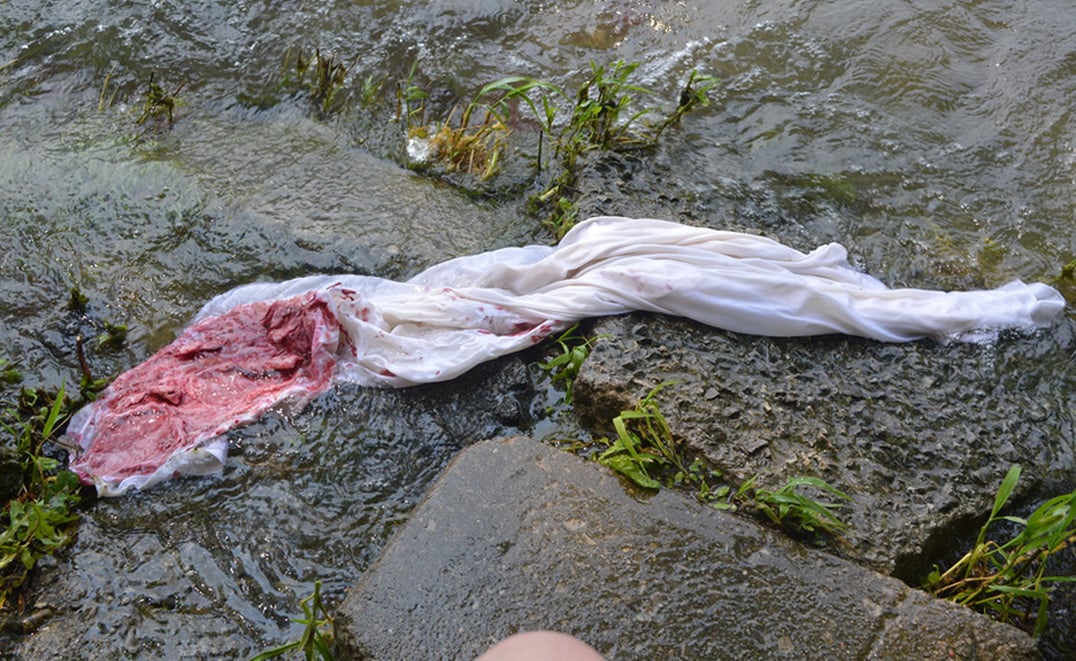 M’CHIGEENG — The Ojibwe Cultural Foundation will be hosting the exhibit ‘Mine is but a tear in a river’ by Simcoe artist Tracey-Mae Chambers , opening today, Wednesday, September 9, in M’Chigeeng. The exhibit takes a powerful look at the issue of missing and murdered aboriginal women in Canada.

The exhibit features 1,181 photos of pieces of clothing painted with encaustic paint to replicate the flesh of the 1,181 documented cases of missing or murdered aboriginal women in Canada from the last three decades.

“The pieces of clothing have been photographed everywhere from Queen’s Park, Ottawa Parliament Buildings, police stations, court houses, churches as well as the streets, malls and meeting places of Canadians,” explained Ms. Chambers. “I have also videotaped them in several locations. I chose to photograph the clothing on the steps of the four churches involved in residential schools, Presbyterian, Anglican, Catholic and United. I have photographed them in bodies of water, dumpsters, wooded areas, busy city streets while Canadians passed by and in subway stations.”

The exhibit will also include several shopping carts, painted flat black, and clothing from the photographs installed on the gallery floor as though discarded.

“To me they represent how we discard what we consume and it further illustrates aboriginal women as also disposable,” continued Ms. Chambers. “When I was taking the photos (of clothing) I kept finding shopping carts in the woods. In the Lynn River in Simcoe I photographed some of the clothing in them. A week later, a woman was found out west in a shopping cart. I debated for a while if I would still use the photos, I didn’t want to upset the family, but in the end I made the decision to leave them in.”

Ms. Chambers’ subject matter for the exhibit stems from a desire to bring attention to the issue of missing and murdered aboriginal women.

“Other shows regarding aboriginal women I had seen were wonderful, but they were pleasant, positive, I wanted to do something more visceral, more confrontational,” shared Ms. Chambers. “I wanted to shock. A lot of people have no concept of how bad things are.”

“I was at a feminist art conference on Toronto Island and after spending two weeks with such amazing, strong, self-confident women it really gave me the motivation to create this exhibit,” she explained. “I’m not a puppies and kittens kind of girl, but I am pretty soft spoken in my day to day. Through my work, though, I feel that my alter ego can come out and I can confront the issues I want to explore, the issues I’m passionate about. I don’t want to talk calmly and quietly anymore. I feel no need to justify my work or my opinion concerning how easily aboriginal women are discarded. It is as though they were never really there in the first place.”

Ms. Chambers explained that a lot of research went into creating the pieces. “I have had third degree burns on my left hand, so I used that as some reference point, but to recreate such a variety of wounds I had to do research to make them look realistic. It was really hard.”

“The exhibit focuses on the flesh and blood of the wounds opposed to the skin because flesh is the common denominator,” said Ms. Chambers. “We wear our clothing to clarify our identity and the threads are then used by forensics to identify us. Our skin is protective, a barrier to the elements while intact and alive. Our flesh underneath the skin has no regard for colour or creed. The flesh is the commonality that binds all women together. It is our common denominator and our common commodity. “

“With the installation of the exhibit, the photos, on transparent pieces of paper, will hang from 18, 11 and 8 feet so that no matter where you walk you will always be confronted with them,” she continued. “I want the exhibit to be a knock to people’s senses.”

There is also a video portion of the exhibit with footage of a bloody wedding dress going over falls and drowning in Lake Erie.

Ms. Chambers said that she felt ‘assaulted’ after listening to the media stories judging, using conjecture, preaching, vilifying and further victimizing aboriginal women. “This is not just the opinion of the media, I have heard words spoken about these women that feel like shards of glass underfoot,” she said. “There is no way to walk safely or softly upon them. There is no way to unsay them once they are uttered. It is not only about educating our young men on how to be kind and respectful as they are not the only culprits in this list of crimes. Every nation on this Mother Earth is culpable. Canada is not the exception, it is the rule. We are all to blame. Subsequent to the crime it is not merely enough to hand out apologies and condolences as though they were coupons that have expired.  I feel we must face brutal truths. The work contained within ‘Mine is but a tear in a river’ makes me feel obliged to note that some may find it uncomfortable to view. Sometimes a little discomfort is required. Flesh is a messy business after all. But I felt compelled to create it.”

When asked if working with such a powerful subject matter had worn on her, Ms. Chambers responded that she has an “amazing support system.”

“My husband and two sons are just incredible,” she said. “They really get what I am doing and are there for me, whatever I need. My 16-year-old son even came with me to Ottawa and helped take photos.”

“The statistics are one thing, but not the only thing. I think the next step is to develop an action plan and I hope this helps bring attention to the issue,” said Ms. Chambers. “The completion of the Truth and Reconciliation Commission findings as well as the release of the report from Justice Sinclair illustrates the need for both an inquiry and a viable action plan to address the issue of murdered and missing aboriginal women. But first, we must reach the Canadian public in order to raise awareness about more than just the statistics. I believe that this terribly visceral representation of the realities of the issue will help to do this.”

Ms. Chambers told The Expositor that this exhibit is just the first of what she plans to be a three-part series.

“I want to explore the direct links to CN Rail, CP Rail, the Hudson Bay Company and religious institutions in my next piece and I’m thinking of a more performative art form. I wore a dress I had painted for some of the photos and it was really powerful. For the third, I would like to do something more abstract, about the next step, about healing.”

Ms. Chambers describes her work as ‘proactive social activism. “I don’t care if my paintings match the colour of your walls,” she joked. “The more I read (the truth and reconciliation), the more angry I get. I only care that I have a voice and I hope that people will listen.”

Ms. Chambers is Ojibwe by birth, but was adopted at a young age. She said that through her work she has been exploring her culture, roots and the history of her people.

‘Mine is but a tear in a river’ is divided between the OCF and the Glenhyrst Art Gallery in Brantford. One thousand and thirty-one photos, as well as 300 plus pieces of clothing and eight shopping carts are installed at the OCF, while 150 of the photos and 60 pieces of clothing and four carts are at the Glenhyrst Art Gallery, soon to move to the Ontario College of Art and Design. The exhibit at the OCF will be on display until Monday, November 30.