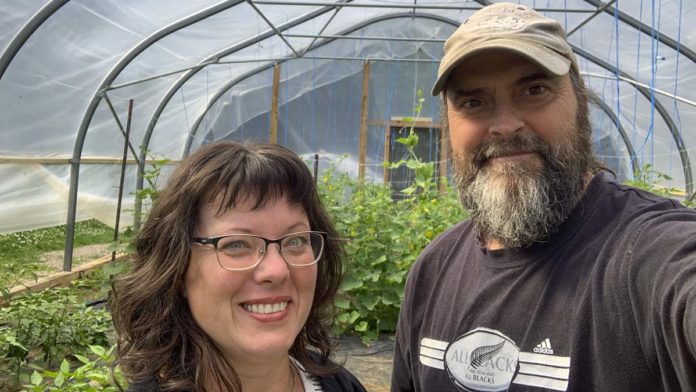 Southwestern Ontario must be emptying out if the influx of residents from the region who’ve moved to the Island is any indication. Sandfield, alone, has had at least three families settle into houses within a half kilometre of each other in the village over the past few years. Many newcomers have chosen Central Manitoulin as their new home, but few have ventured as far west as Sarah and Kit McEvoy who left behind their lives in Amherstburg to both literally and figuratively set down roots in Silver Water.

Kit is a native of Windsor who held jobs in a wide array of fields. He studied travel and tourism at St. Clair college but ended up in industries ranging from recycling to working in a plastics factory, to being a business courier, to the construction and hospitality sectors. He also started a t-shirt printing business and worked in an employment centre helping people to find jobs. Nothing really sparked his interest. “They all paid the bills, but nothing truly drove me. I was still trying to find my direction when I met Sarah.”

Originally from Brownsburg, Quebec in the Laurentians northwest of Montreal, Sarah left her rural home to complete Grade 13 in Ontario. On a whim, she moved to Windsor in 1994 at a time when the city was booming. “The Big 3 automakers were going strong, and the city had just opened a casino, so jobs were plentiful,” explains Sarah. She worked for years in the food and beverage industry in the city where she met Kit.

When the boom went bust after 9/11, the pair worked together in construction for a short while. However, like Kit, Sarah was reluctant to pursue her dream until 2005 when she became a registered massage therapist (RMT). Even with a rewarding career, the 2008 financial crisis along with the deaths of beloved family members at roughly the same time got her and Kit thinking seriously about what they wanted to do with their lives long-term and the importance of their own health, especially the impact of healthy eating.

“As we became increasingly aware of how commercial food is prepared and offered to us, we decided to move out to the county near the town of Amherstburg where we found a house with a plot of land that fit our needs. I wanted to learn how to grow our own food and Sarah knew how to do canning and preserving. And that’s when I finally found my calling – market gardening – now my passion and life’s purpose,” says Kit.

“We wanted to implement a ‘clean eating’ lifestyle and started out small with a garden just for us but quickly found people interested in buying produce and starter plants grown with organic methods,” inserts Sarah. “We had a lot to learn about commercial gardening but, once we saw the need for healthy eating, our whole purpose was to learn how to garden in a way that allowed us to make a living and have our own food security.”

By 2011, they had started a CSA – consumer supported agriculture – with a growing list of customers to whom they would deliver fresh produce each week. Business was going extremely well, but Kit and Sarah wanted to move away from an urban area to live in the North. Regular summer trips to Tobermory eventually led them to Manitoulin, where they camped at Oakes Cottages and Trailer Park

The experience left them convinced the Island would become their home. “On day one of our road trip to find a home in the North, we reached Sandfield and knew that Manitoulin Island was it. We continued through to Sault Ste. Marie and Chapleau but knew the Island was right for us.

After 22 years together, the couple married in 2018 at the Oakes property where they made a fortuitous connection to real estate agents (and wedding officiant) Shannon and Tim Fennerty. That conversation set the wheels in motion to find a place to live by the spring of 2020. When the time came, however, COVID-19 had struck and countless other city dwellers had the same idea, snapping up any and all available Manitoulin properties.

They found their new home in Silver Water and moved in on their second wedding anniversary in late September 2020, unbeknownst to them buying the house and land of the late Danny McKay, which he and his family had run as a homestead.

In spring 2021 they had a small garden of their own and used the garden of their neighbour, Ardith Cull, who volunteered the use of her land. By summer, they began selling their produce at Karen Noble’s summer market. They built a greenhouse last fall to house seedlings and, this year, are into full-fledged market garden operations from their own property, selling to both full-time and summer-only area residents. While Kit handles the gardens, Sarah cans, pickles, freezes, and preserves their harvest to meet their own food needs throughout the year – all this while she also works as an RMT from her home office as well as in Mindemoya.

The couple credits their success with their good fortune to move to Silver Water, a place that has embraced them with open arms. “I don’t have the words to express how absolutely amazing people have been to us,” enthuses Kit.  “They’ve been extraordinarily helpful and kind. We love it so much that my parents just purchased a home in Mindemoya and will soon be joining us in this wonderful place.”

“This has been an incredible community, where people are so welcoming and supportive of us,” adds Sarah. “We have met other newcomers to other parts of the Island who haven’t all had this experience and we feel really blessed. We are at home here and are so happy to be able to serve the community.”

The couple plans to continue expanding their gardens and food offerings to provide fresh food security for the West End of the Island – news that has been well received by their many senior neighbours in Silver Water and Evansville and as far away as Meldrum Bay, as well as Sheshegwaning and Zhiibaahaasing First Nations.

*Heather Marshall and her husband worked as journalists and consultants in the National Capital Region for more decades than they care to admit before making their Sandfield cottage their permanent home.  A lifelong learner, Heather loves discovering new things and people and relishes the opportunity to write about newcomers to the Manitoulin. If you would like to share your story or know of recent arrivals we should meet, send a message to hmarshall@videotron.ca 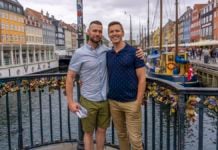 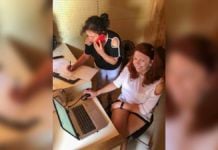 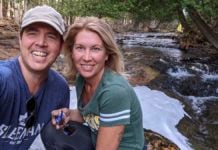 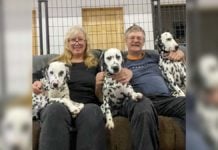 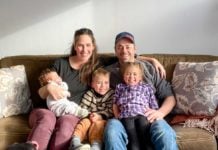 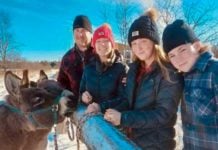