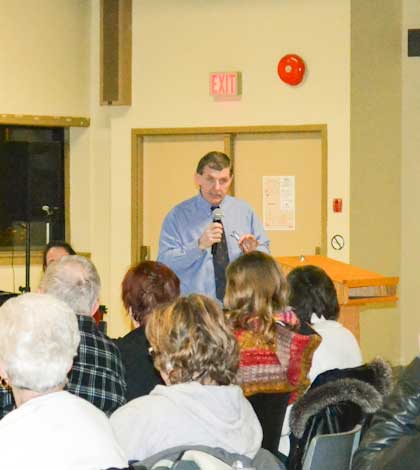 He reported that no new complaints had been received regarding property standards.

“Parking is being monitored and tickets issued as required,” added Mr. Spry. “Regular patrols are also being made at Low Island Park regarding dogs being off leash.”

Council hears deputation from the Child and Family Centre

Barry Sullivan and Melissa Anderson of the Child and Family Centre made a presentation to council last week, explaining their role in the community helping youth with mental health issues. The pair also said they were seeking new board members and were hopeful that council would consider submitting a representative in the future.

In light of the resignation of Councillor Paul Skippen from the Manitoulin Planning Board, Northeast Town Mayor Al MacNevin appointed Councillor Bruce Wood as the town’s representative on the planning board.

“Through our procedural bylaw, I appointed Councillor Wood as our new representative, but the secretary-treasurer of the board (Elva Carter) failed to recognize the designation, claiming that council must approve the decision,” explained Mayor MacNevin, noting that through the procedural bylaw, council has designated the ability to designate councillors to boards and committees to the mayor.

“It is very clear under the Municipal Act that council has the ability to designate authority to the mayor to appoint councillors to boards and committees, which is what this council has done,” town CAO Dave Williamson told council.

Council discussed how they were frustrated by the secretary-treasurer’s decision to not recognize the mayor’s authority, but decided to carry a motion designating Councillor Wood to the Manitoulin Planning Board in order to ensure his appointment was recognized at the next board meeting.

After reviewing a donation request from the Sheguiandah Senior Citizens’ Club for the renovation of the club’s hall, council carried a motion to donate $4,720. The amount was equivalent to the funds the club spent on building permits and landfill disposal fees during the hall’s renovations. The donation will be used to help cover the cost of new floors for the hall.

The Northeast Town council reviewed tenders for both the town’s property insurance and group insurance.

Mr. Williamson explained that for group insurance, Schuster Boyd McDonald’s bid came in at $80,940 a year, significantly less than the town’s current provider, Health Quotes, who bid $116,148.60. Some councillors expressed concern that the cheaper bid might mean a reduction to policy benefits, however Mr. Williamson said that he sat down with both brokers and that staff was confident that Schuster Boyd McDonald’s bid offered a policy that was equivalent or even slightly better than their current policy.

She reported that $933,439.49 had been received in taxes in September and $738,261.38 in October. She also noted that arrears notices would be sent out to all outstanding accounts.

For water and sewer, Ms. Wilkin reported that $198,493.33 had been billed for October and that $142,951.64 had been made in payments. She also told council that there were currently 42 accounts over the $500 maximum leading to four accounts being disconnected. She further explained that 38 of the overdue accounts were due to a recent billing with a September 31 due date. Notices of arrears will be sent to all outstanding accounts, she added.

In reviewing the 2013 operating summary, Ms. Wilkin explained that there is presently $1,712,597 left in net operating, but that there are still many bills to come out.

She noted that while it seems like a lot of extra revenue, it would balance out in the next two months as there are still hydro bills, a landfill loan payment, two months of expenses, four months of policy and two months of District Services Board invoices outstanding.