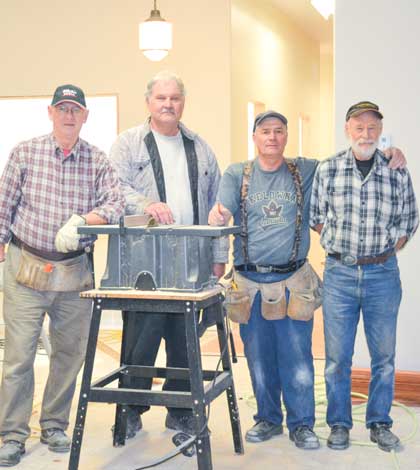 SHEGUIANDAH—The Northeast Town council has donated $4,720 towards the Sheguiandah Seniors’ Hall to assist with the group’s ongoing renovations.

Renovations on the hall started at the beginning of the summer, however despite several grants amounting to $110,000, the not-for-profit group was reaching the end of its budget until council stepped up to the plate to help.

“It is our centre in the case of emergencies out in that area,” said Councillor Paul Skippen during council discussion of the donation request from the group. “The additional funds may be the difference between a floor or not for the hall.”

The Sheguiandah Senior Citizens’ Club made a request to council last week asking for a donation of $4,720, the amount spent on its building permit and landfill disposal fees.

“This is an emergency spot for the community,” added Councillor Michael Erskine, “and is integral to so many people for different activities. The request exceeds our usual donation limit, but the amount of volunteer hours and energy put in by members of this group and what this hall means to the community. I think warrants the donation. Sometimes there are exceptions, and I think this is one of them.”

Council carried a motion to donate the requested funds.

“We were surprised, but very happy,” Sheguiandah Senior Citizens’ Club Vice-President Rick Gjos told The Expositor following council’s decision. “We have tried to save and reuse as many elements of the old hall as possible and the community has been so generous with donating services and volunteer time, but we were still getting really close to the end of our budget. Thanks to council’s donation we will be able to finish the main floor.”

The hall is nearing completion with framing starting last week, in addition to the kitchen cupboards arriving.

“We have been so lucky with the support we have received and the volunteers who have logged just under 2,000 hours,” added Mr. Gjos.

The hall, which was built by the Independent Order of Foresters, has been in serious need of repair for several years due to rotting floor joists, walls and a cracked foundation. It is a much-used staple in Sheguiandah, hosting many community events for both seniors and Island residents alike, in addition to acting as an emergency hub for power outages.

The grants that made the renovations possible include $50,000 from the Human Resources and Skills Development Canada New Horizons for Seniors program, $50,000 from the Ontario Trillium Foundation and $10,000 by the Northeast Town through the McLean’s Mountain Wind Limited Partnership.

“We are also still seeking donations to help with final costs,” concluded Mr. Gjos. “My wife Gail and Myrna Ferguson made a beautiful quilt and are selling tickets to help fundraise as well, with the draw taking place at the Christmas potluck.”