LITTLE CURRENT—The Northeast Town council presented Cameron Spec with a special certificate last week recognizing him as the municipality’s 2015 Senior of the Year.

“Mr. Spec was born on October 19, 1921 in the CPR station in Eau Claire,” said Deputy Mayor Marcel Gauthier. “His father was the CPR agent at the time and the family resided at the station. Mr. Spec is the proud father of three children, Craig, Howard and Cathy, and is the loving grandfather of seven grandchildren and two great-grandchildren.”

“He began working for CPR railway in 1942 in the little town of Nobel and moved to Sudbury in September of 1943,” continued Deputy Mayor Gauthier. “In 1950 he came to Little Current and worked as a clerk at the coal docks, eventually becoming superintendent until he retired in 1982 with 40 years of service. “Mr. Spec has made a huge impact on the town of Little Current. He belonged to the first hospital board when it was owned by the Sisters of St. Joseph and served as chair of the building committee and also chair of the board.”

Deputy Mayor Gauthier also explained that Mr. Spec was the secretary of the Little Current Public School Board and a member of the Manitoulin School Board where he served as second chairman.

“As well, he was a member of the Manitoulin Centennial Manor board and served as its chairman in addition to being a member of LAMBAC for 18 years,” noted Deputy Mayor Gauthier. “Mr. Spec likes to keep busy. After retirement, he helped his wife with her florist business and also sold Real Estate. He enjoys curling and has been an active member of the Little Current Curling Club since 1951.”

“As you can see Mr. Spec has been a very dedicated individual in our community and is an excellent candidate for Senior of the Year for 2015,” concluded Deputy Mayor.

“Thank you very much,” responded Mr. Spec when he was presented with his certificate from Northeast Town Mayor Al MacNevin. “This is a huge honour.” 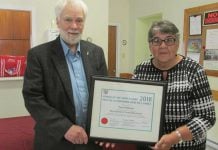 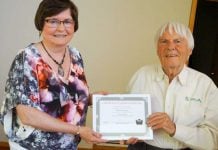 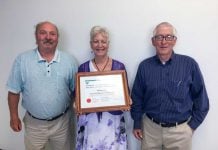 Marilee Hore is named 2018 Northeast Town Senior of the Year 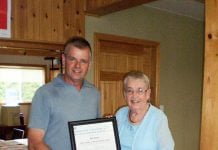 Bill Sloan named Senior of the Year for Gordon/Barrie Island 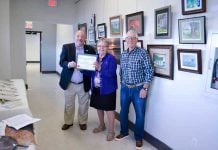