WIIKWEMKOONG – Holy Cross Church in Wiikwemkoong is fundraising to put a new steel roof on its main church building and the community has already amassed $28,000 of its $48,000 goal, though there remains much work ahead to raise the rest of the amount.

“Everybody uses the church at some point or another, for funerals, baptisms and not to mention the church masses and special masses,” said Audrey Ozawabineshi, a community volunteer who has taken up the call to complete some fundraising toward the effort.

Holy Cross Church is the oldest Catholic church in Northern Ontario; its construction began in 1849 and used Anishinaabe labour for all of the masonry work, particularly the Wakegijig, Gabow and Kenogameg families.

In 1954, a fire destroyed the church, the hall and a residence, but quick-acting people saved the records and most items from within. Community members quickly rebuilt the church.

“More recent work on the church includes the placement of a new steeple, in 1999, 100 years after the original steeple was put up,” said Father Paul Robson, SJ. “Now, we are putting a new steel roof on the building, plus doing a couple of other renovations, with the work being done by Wikwemikong Housing.”

The church holds a central role in the community, owing to its centuries-old and sometimes complicated relationship with Wiikwemkoong. Its time of need has drawn support from many community members, even those who are not a direct part of the church, such as Ms. Ozawabineshi.

She often hosts raffles and bingos (when the pandemic hasn’t interrupted those activities) and some of those proceeds have gone toward the roof project. She often gets called in to help the church’s initiatives because she’s known to be a prolific fundraiser.

“I’ve just always enjoyed fundraising. It makes me feel good, giving back to the community and helping out. With a project as large as this, I’m just helping a little bit in there with the raffles, at Buzwah Church when they do their dinners, or helping out with bingos,” Ms. Ozawabineshi said.

Wiikwemkoong’s Chase the Ace lottery has also been a considerable help for the church roof project.

Ms. Ozawabineshi cited Rick Leedham and Dawn-Marie Jacko of Buzwah Variety and Video, who are selling artisanal face masks designed by local artists and donating half of the profits to the church roof project.

“I’m really proud to come from such a loving and giving community. Together, we all make magic happen,” she said.

The church is also a tourist draw for the many people who come to see the ruins of the former residence, whose stone walls are all that remain of the structure. Debajehmujig Storytellers often stages theatrical productions in the old ruins (when gatherings are allowed) during the summer months, as well as a special production of The Passion of Jesus Christ.

As much as this roof replacement is the current focus, the bills and future projects at Wiikwemkoong’s four satellite Catholic churches are beginning to amass.

“Already South Bay is looking for more renovations. We did Buzwah, Kaboni, now it’s Wiiky’s turn, but already South Bay is needing renos. It goes on and on. We’re hoping we can even get people to do proposals (to companies for support), so we’re looking for somebody to do that,” said Marjorie Trudeau, a Diocesan Order of Service member at Holy Cross.

Support from fellow church communities has been an asset for this campaign, including a $5,000 donation from Holy Rosary Church in Guelph. Fundraisers said they hoped to partner with businesses closer to home to help get the project underway.

Those efforts have shown some success—Rosemary Wakegijig drew $1,200 from several Wiikwemkoong businesses last week, according to Ms. Ozawabineshi. 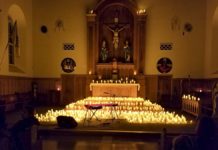