Role model, treasured friend and a mother figure to many, her legacy lives on

M’CHIGEENG – There are few more honourable vocations than a life dedicated to education and no one exemplified that than the late Melvina Corbiere baa. Ms. Corbiere began her spirit journey following a courageous battle with cancer, leaving behind generations of students, colleagues, friends and family to mourn her departure and celebrate her legacy.

“Mom had such an amazing life” said her daughter Lisa Corbiere-Addison. “She was a shining example of “If you can be anything in life, be kind. She was a role model, a treasured friend, a mother figure to so many. She could recognize differences in us all but focused on common ground and filled everyone around her with love and sunshine. She moved forward with what was positive in her life, shaping her into a strong, loving, kind and unique woman.”

Together with her husband of 64 years, Ron, Ms. Corbiere raised eight children, was grandmother to 19 and great-grandmother to 23, with a host of foster children thrown in for good measure.

“There is so much to say about Melvina Corbiere,” said M’Chigeeng Ogimaa-kwe Linda Debassige. “Her lifelong dedication to the community, not just in education, but in all facets. She was a councillor and education director for the community and, later in life, a respected elder. She was so active in every way.” Ogimaa-kwe Debassige said that her council was determined to find a way to honour Ms. Corbiere’s legacy. “We will be having discussions with the family in the future to plan a suitable way to honour her considerable contributions to, not only our community.”

She began her career in education at the age of 17 after graduating from St. Joseph’s Residential School (1946 to 1955) at a time when the journey from high school student’s desk to front of the class took a mere summer school’s course to prepare for, nonetheless, her life’s journey exemplified that of lifelong learning—going on to graduate from Hamilton’s Ontario Teacher Education College in 1975 and earning her BA at Laurentian in 1980.

Her first job as a teacher was at the West Bay Indian Day School and she would go on to teach at the elementary and secondary school levels, enter the administrative stream in 1990, becoming M’Chigeeng Firsts Nation education coordinator in 1994. As education director for the band, Ms. Corbiere proved instrumental in M’Chigeeng taking control of their own education system, integrating the Ontario curriculum with Anishinabemowin, culture and traditions, laying down a critical base to act as a springboard for future generations. Such was the influence of her example that all three of her daughters would go on to become educators themselves.

The influence of her life’s example extended far beyond the boundaries of her own family, however, forging a path that many of her students would follow into rewarding careers.

Determined to help steer her community on a steady path into the future, Ms. Corbiere also served six terms as a band councillor for M’Chigeeng.

“I didn’t truly realize the impact she had on me until I got to university,” said Anishinaabe historian Alan Corbiere, Ph.D., MES, B.Sc., now himself a professor in the department of history at York University. Mr. Corbiere recalled Ms. Corbiere’s influence. “I came to realize how important it was for me to see an Indigenous person in a position of authority. She was a really kind teacher and a really good teacher.” The historian recalled how Ms. Corbiere “never talked down to us.”

Upon his return to M’Chigeeng from university, Mr. Corbiere went from student to colleague, working at Lakeview School during Ms. Corbiere’s tenure as education director. During his time at the Ojibwe Cultural Foundation, Mr. Corbiere enlisted Ms. Corbiere’s experience in creating an exhibit on the Spanish Residential School. Ms. Corbiere would also go on to assist in a number of Anishinabemowin programs, where the veteran educator took on a new role, that of author, penning supporting documents for language.

“She was a very diligent worker,” said Mr. Corbiere. “She did a lot of stuff behind the scenes, things that didn’t get any credit or glory, but she rolled up her sleeves and got right to it.”

Together with other pioneers of Indigenous education like Sara Peltier baa, Ms. Corbiere’s sister Grace Fox, Liz Paul baa and Louis Debassige baa, Ms. Corbiere helped establish an Anishinabemowin program at Lakeview School that provided a springboard for many young speakers today. “She really believed in it,” said Mr. Corbiere.

“She was also a very brave, no-nonsense person,” said Mr. Corbiere, relating a story where his mentor moved against the prevailing tides of public opinion. “It was when the residential school stuff was all starting to come out and there were people who had never gone to residential school talking about all these horror stories that we have learned about.”

“She listened to all these people for a long time and then, I guess she had had enough,” said Mr. Corbiere. “She got up and said that by the time she went to residential school, those days must have passed, because she never witnessed anything like what people were saying. I remember thinking how brave she was to stand there and speak her truth.”

But Ms. Corbiere spoke her truth, contradictory as it may have been to the prevailing narrative, with grace, gentle humour and dignity. “She did it in such a gentle way,” he said. “She managed to get her point across with grace. It was a testament to her character.”

Ms. Corbiere’s humour and openness to her students led to her adopting one of the phrases often expressed by her students. “When her students would accomplish something in Anishinabemowin she had set out for them, some of the kids would say ‘ever good me!’.” The unprepossessing educator adopted that catchphrase as her own and would often exclaim it herself following a talk—with a big characteristic grin.

For all of her work to strengthen and revitalize Ojibwe language and culture, the educator was far from being stuck in the past. As her oldest granddaughter Carol Corbiere referenced in the eulogy for her grandmother’s funeral, Ms. Corbiere became adept at utilizing social media to “not only connect to her family, it also let all of you, her dear friends near and far be part of that connection.”

Ms. Corbiere was also a lifelong baseball fan and Mr. Corbiere recalled her steering the class toward the ball diamond on a Grade 8 class trip to Toronto. “Star Wars was just out that year and we all wanted desperately to go see it, but Melvina said that Ron (her husband), who was also on the trip, wanted to go see a Blue Jays game,” he said. “So, there we all were, watching the Blue Jays game instead—it wasn’t all that bad,” he said ruefully. “When I learned that her family had recently arranged for her to take in a Blue Jays game in a box seat, I started to wonder if it was really Ron who wanted to see the game so badly,” chuckled Mr. Corbiere.

As her granddaughter’s eulogy noted, “some of the kind words shared about grandma have been wonderful to read,” those words included ‘sweet, brave, warm, funny, strong, loving, chipper, beautiful, witty, determined, optimistic, hardworking, giving and kind.’

“Truer words could not be spoken,” said Carol Corbiere. “Our grandma also had the best hugs and that unforgettable warm smile of hers is something I want us all to remember.” 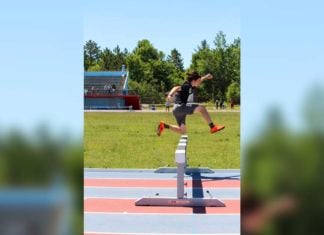