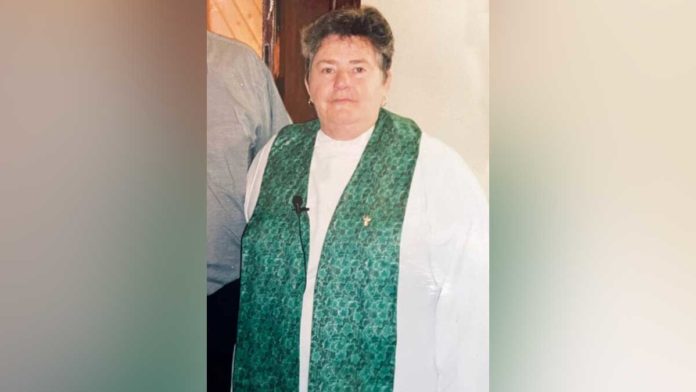 A pillar of the Manitoulin Island has joined the angels

MANITOULIN—A pillar of the Manitoulin Island community, Pastor Maxine Elizabeth McVey, passed away on January 6, in her 75th year.

“She gave me one of the angels that she collected. To me she was an angel herself, a person with a deep, spiritual, intuitive sense,” said Rev. Mary Jo Eckert Tracy of friend and United Church clergy colleague Maxine McVey. “I’ll really miss that, her intuitive and spiritual sense.”

“Maxine had a gift of hospitality to friends and colleagues, as well as family,” said Ms. Tracy.

“Within her family, Maxine was the matriarch, and her children and grandchildren meant so much to her,” said Rev. Tracy. “Maxine and her husband Doran were married over 50 years, and they showed a lot of love for each other.”

“Maxine was a very humble person, she took life the way it came,” said Ms. Tracy. “She was accepting of others, didn’t judge people. She was just open and accepting of all others.”

Former parishioner Jeff Hietkamp of Gore Bay said, “Maxine was really good for our church (Lyons Memorial United Church) and our congregation. She was with us for about eight or nine years.”

“Maxine had a saying, she led from behind,” said Mr. Hietkamp.  “She would let people find their way. Maxine had a very pleasant personality, and she and Doran were a great couple—Doran was also quite involved with the church.”

Retired Pastor Erwin Thompson said, “yes, Maxine and I knew each other for over 50 years and our journeys were sort of parallel. She and I were both assistant district commissioners of the Cubs Sudbury District Boy Scouts for over 50 years. We trained Cub Scout leaders and ran Cub Scout camps together.”

“Maxine was the delegate to the presbytery for Larchwood Memorial Pastoral Charge in Dowling and I was the delegate from Lively United Church,” said Mr. Thompson. “And we both started our training in the ministry at the same time, Maxine at the Centre for Christian Studies in Toronto and I came to Silver Water as a lay pastoral minister in training.’”

“When Maxine completed her training, she went to St. James in the Valley United Church. Then she came to Gore Bay and was the minister there for about for nine years,” said Rev. Thompson.

“Maxine was always a very caring, compassionate person. She always put others before herself,” said Mr. Thompson.

The Canadian Shield Regional Council (CSRC) of The United Church of Canada, in a release dated January 6 wrote, “it is with profound sadness and deep gratitude for a life of faithful service that we share the news that Maxine McVey has died, peacefully and surrounded by family, at Health Sciences North earlier this afternoon. Please join us in holding her husband Doran, their children, and grandchildren and all who loved Maxine, in prayer.”

“Maxine is known to many across our region for her years of leadership and commitment to our church family. She came to realize her vocational calling as a lay leader at Larchwood Memorial in Dowling, and after her course of study at the Centre for Christian Studies, was commissioned as a Diaconal Minister,” wrote CSRC. “She served the people of people of St. James in the Valley United Church (Sudbury), and Lyons Memorial United Church (Gore Bay) with great job and love.”

“Maxine was also dedicated to leadership in the wider United Church of Canada, serving in Sudbury Presbytery as President of Manitou Conference, as a delegate to General Council, and most recently, on the Transition Team and Executive of Canadian Shield Regional Council,” wrote CSRC.

“Maxine’s legacy of justice and healing is most realized in her ministry supporting right relations with Indigenous people, both locally in the Sudbury Manitoulin area, and in her work with the wider United Church of Canada,” continued CSRC.

“Maxine was instrumental in the construction of the Apology Cairn at Laurentian University in Sudbury, marking the site of the 1986 United Church Apology to Indigenous people. She was a most respected and valued member of the Right Relations Resource Team for Canadian Shield; this ministry and deep learning profoundly affected her life and spirituality,” wrote CSRC.

A graveside service and celebration of Maxine McVey’s life will be announced in the spring/summer 2022, as circumstances allow.